Led by the outrageous looking Tesla Cybertruck, a fleet of new EV pickups are inbound to disrupt the most profitable market sector in the U.S. They come from 100-year-old automakers and never-made-a-product startups alike, all claiming different and impressive stats. Some are the real deal. Some are vague specters on the horizon. Some are made by companies reportedly being investigated by the Securities and Exchange Commission for misleading investors. All are interesting.

So we want to break down exactly what each one has to offer. There’s a problem, though; with so much investor hysteria and Silicon Valley salesmanship, some of these are bound to be vaporware or not meet expectations. We’re going to be honest about what smells fishy and what may not come to pass. Not just because we want to set realistic expectations, but also because the real ground breakers in this group are exciting enough that we don’t need to dote on pie-in-the-sky options.

The Cybertruck is the most high-profile electric truck. Its announcement led to stunned silence by auto commentators, fervent defenses by Tesla fans, and many well-publicized pre-orders from YouTubers cashing in on the hype. It’s easy to see why. The Cybertruck is unquestionably the most bold product announcement of the decade, a steep departure in almost every way from the norm.

The Tesla Cybertruck Is Here and it’s Wacky

Especially on styling. Early reactions were largely negative, though it seems like opinion is slowly shifting in favor of the Cybertruck. It’d be hard to argue that it’s pretty, but at least it’s something new. The specs, too, break convention. It’s a gigantic pickup truck that’ll supposedly do 0-60 in 2.9 seconds, tow 14,000+ lbs, and travel over 500 miles if you opt for the $69,900 tri-motor version. Choose the base model and Tesla claims you’ll get 250+ miles of range, 7500+ lbs of towing, and a starting price of $39,900.

It’ll also have Autopilot, access to Tesla’s fantastic network of high-speed superchargers, and the company’s slick infotainment U.I. Combined with what would be class-leading towing and supercar acceleration, there’s a lot to get excited about. Especially with Tesla’s track record of making great-driving, game-changing cars. But also expect normal Tesla issues. Early models have historically had build quality issues and service center complaints have skyrocketed as the company has grown.

Still, Tesla’s delivered on unbelievable promises quite often. The company mostly misses on timelines and prices. You’ll probably be able to get a Cybertruck now that the factory location is secured, just maybe not in fall 2021 at $39,900. And Autopilot probably still won’t be fully self driving. 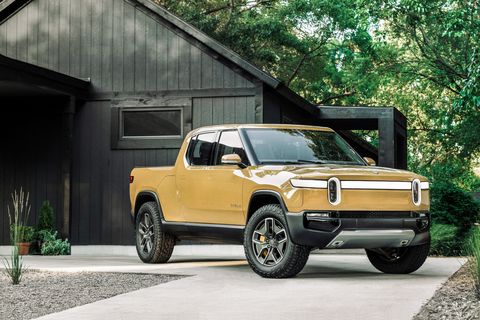 Behind Tesla, Rivian is the most well-established EV truck startup. The company has a proprietary architecture, a factory to build the R1T, and multiple working prototypes. It’s not a sure thing, since we’ve never seen a Rivian production vehicle, but the company has inked big partnerships with Amazon and Ford and seems to be committed to its mission.

The R1T is the consumer part of that mission. The company will also make delivery vans and SUVs, but it’s the R1T that serves as its opening salvo in the truck wars. The truck will be sold in 105-, 135-, and 180-kWh versions, with ranges of 230-, 400-, and 500-mile ranges respectively. With a motor at each wheel, the R1T will also be able to spin in place using “tank turn” mode. The 135-kWh version should be able to hit 60 in 3 seconds flat. They’ll also come with the hardware require for Level 3 semi-autonomous driving, though it may not be enabled at launch. Final tow numbers haven’t been announced, but Rivian says all versions should be able to pull over 11,000 lbs.

The truck was originally slated to arrive in late 2020, but due to delays and the coronavirus pandemic first deliveries have been pushed back to June 2021. Pricing starts at $69,000, but sales haven’t started so that’s subject to change. 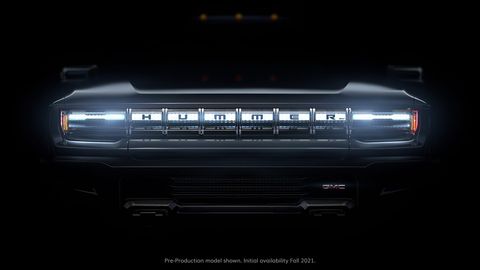 GM is reviving the Hummer nameplate, calling its upcoming electric truck the GMC Hummer. The full reveal won’t happen until October 20, but the company has already shared some interesting details. First, as with all electric trucks, there is a crazy acceleration figure: GM says the Hummer will hit 60 in 3.0 seconds, matching the Rivian but falling short of the Cybertruck. That’s due to a claimed 1000+ hp and 11,000 lb-ft of wheel torque, though wheel torque is not the same thing as engine torque.

Hummer Electric Pickup: Everything We Know

The Hummer will also offer removable roof panels, like a T-Top or a hardtop Wrangler. It’ll also offer adjustable air suspension and a massive 200-kWh battery pack. Last, there’s crab mode. It’s the inspiration for the crab logo that adorns the Hummer and allows the truck to move diagonally by pivoting all four wheels in the same direction. A gimmick like tank turn, but still fun. We’re not sure what it’ll cost, but more details are being announced as we approach its fall 2021 launch date. 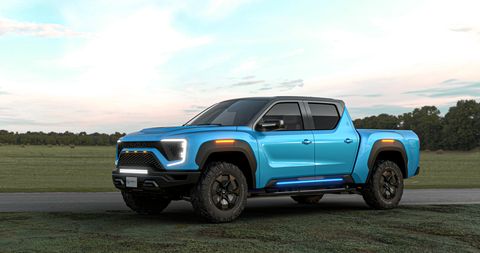 Despite being known for hydrogen tech, Nikola has also announced a battery electric truck. The company intends to make the Badger in both battery-electric and fuel-cell versions. Targets for the battery electric version include a 0-60 time of 2.9 seconds, an 8000-lb towing capacity, 906 hp, 980 lb-ft of torque, and 300 miles of range.

Now, a healthy dosage of salt. These stats were released before Nikola announced a partnership with GM, through which “General Motors will engineer, homologate, validate and manufacture the Nikola Badger battery electric and fuel cell versions,” according to a GM release. It’s hard to know if these stats will hold and how serious Nikola is about consumer trucks, especially as the company battles a short-seller report alleging rampant fraud and, reportedly, an SEC and DOJ combined probe into whether it misled investors. So we’ll just say that—when a company pushes a non-driving prototype down a hill to get its “In Motion” promo footage and then defends itself by saying it never claimed the vehicle was driving—there’s reason to be skeptical about its claims. 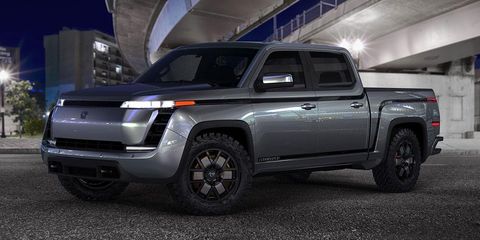 Lordstown Motors is a startup that’s launching out of the former GM plant in—you guessed it—Lordstown, Ohio. The company is trying to beat other EV trucks to market, aiming to deliver Endurances to customers in early 2021.

If the company hits its targets, the Endurance will have a 250-mile range and tow 7500 lbs. Pricing should start at $52,500 before any incentives or tax credits. The company expects it to make 600 hp using four hub-mounted motors. The company claims to have amassed 20,000 orders. That’s reason for skepticism in a company this new, especially as we still haven’t seen the truck doing much under its own power, but having a large-scale factory lends it some credibility. 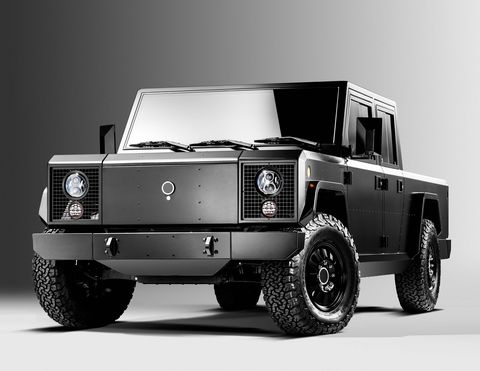 Bollinger is clearly serious about producing a capable electric truck, just don’t expect it to be a mass-market hit. The B2 will start at $125,000 and be a Class 3 truck, legally allowing it to be sold without airbags. Simply put, it’s not for the faint of heart—this truck is focused on hardcore usage. 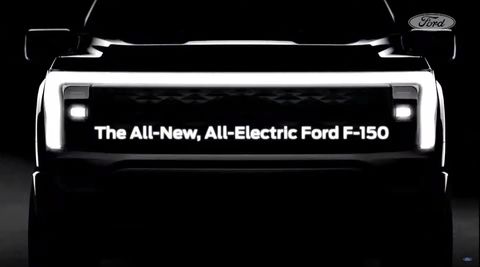 Ford is planning to launch an electric F-150 by mid-2022. We’re not sure exactly when, we don’t have any specs, and we only have one low-res teaser. That being said, we do know that it’ll be the most powerful, torquiest, quickest F-150, with dual electric motors and a “giant” front trunk. Ford has also confirmed that the electric F-150 will be able to power job sites like a generator. And though it may have been less impressive than it looked, Ford at least showed it was serious about marketing electric trucks with its “tow a train” stunt.

Regardless, this is a major one to watch. The Ford F-Series is America’s best-selling vehicle, with nearly a million sales every year. Most of those are F-150s, meaning this is the most popular, high-profile nameplate ever to go electric. If Ford can deliver it at an approachable price and sell buyers on the merits of EV trucks, this could massively speed up electric vehicle adoption in the U.S.

The Hummer and Nikola Badger won’t be the only GM-built electric trucks. The General is also planning to launch a 400-mile battery-electric truck under the Chevy brand. Smart money says it’ll be an electric Silverado, but it’s possible that it could be an electric Colorado or a new nameplate entirely.

This content is created and maintained by a third party, and imported onto this page to help users provide their email addresses. You may be able to find more information about this and similar content at piano.io