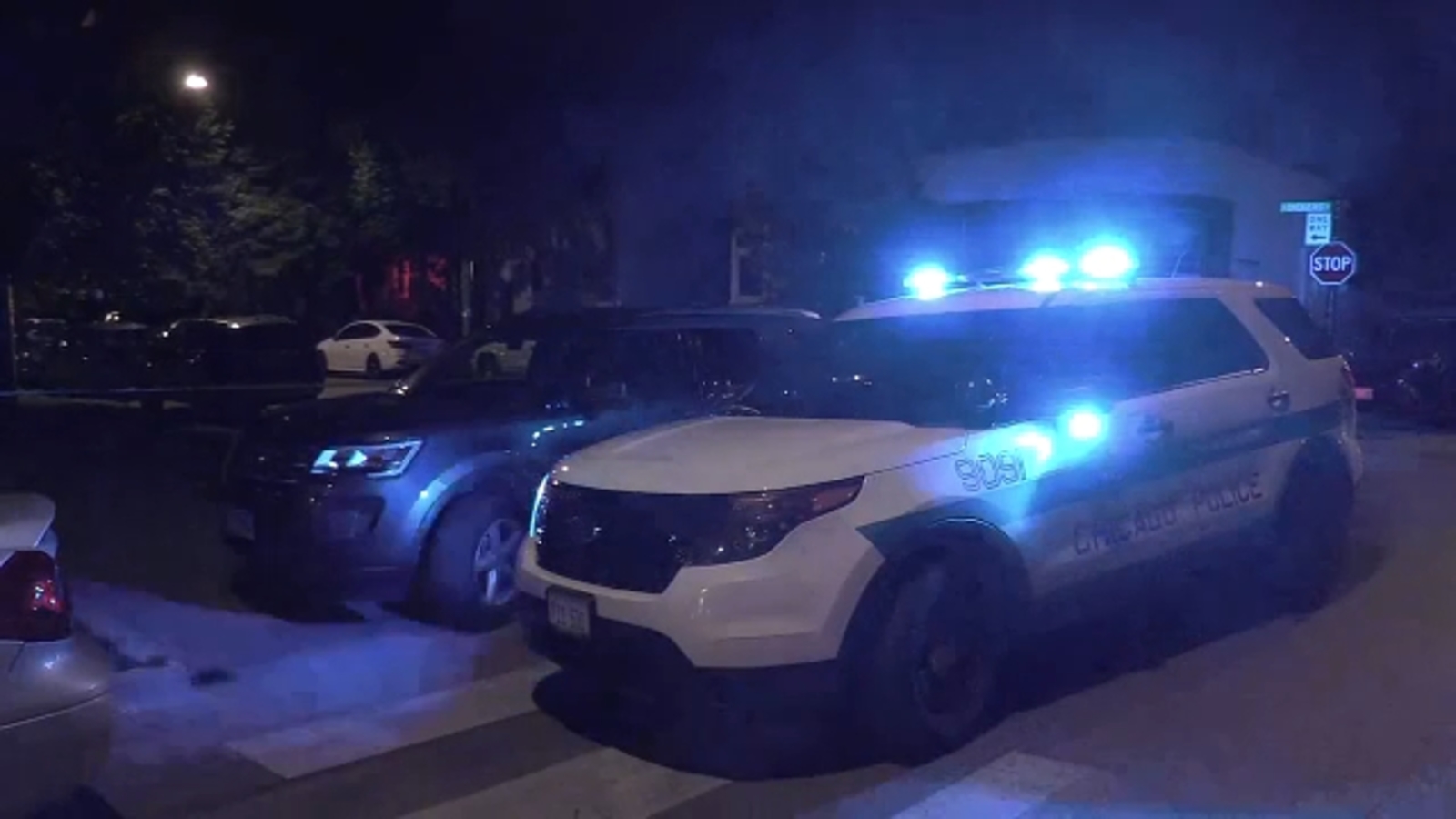 CHICAGO (WLS) — At least 14 people including three minors, have been killed and 38 others were wounded by gun violence in Chicago since Friday evening.

A 38-year-old man was fatally shot Sunday morning in Little Village on the Southwest Side, Chicago police said.

The man was walking in an alley in the 2500 block of S. Troy just before 8:30 a.m. when an SUV approached the alley and an unknown suspect exited the vehicle and fired multiple shots at the victim, according to police. The suspect then fled the scene in the SUV in an unknown direction. The man suffered multiple gunshot wounds and was pronounced dead at the scene. Area 4 Detectives are investigating.

An 18-year-old was was shot and killed in South Chicago Sunday morning. Police responded to the 8300 block of S. Muskegon where they attempted to render aid to the victim before he was transported to the University of Chicago. Police say the shooting occurred in the 8200 block of S. Escanaba just after 7:15 a.m., before the victim relocated to where police responded. He was pronounced dead at the hospital. Areas 2 Detectives are investigating.

A 19-year-old man was also shot and killed in the Rogers Park neighborhood on the North Side. According to police, just before 7:00 a.m. the victim was walking in the 1400-block of W. Lunt Avenue when an unknown male offender approached him and fired one gunshot to the back of the victim’s head.

The suspect then ran to a black SUV and fled westbound on Lunt Avenue towards Clark Street, police said.

CFD Ambulance transported to the victim to St. Francis Hospital where he was pronounced dead. The Cook County medical examiner’s office has not released any further details about the death.

A 21-year-old man was shot while he was jogging in Gresham on the South Side.

About 8:30 a.m. he was jogging in the 7500 block of South Harvard Avenue, when he heard shots and felt a pain, Chicago police said.

He was struck in the leg took himself to St. Bernard Hospital for treatment, police said.

Area One detectives are investigating.

A 31-year-old woman was critically injured in another shooting Sunday in Rogers Park on the North Side, Chicago police said.

According to police, around 5:42 a.m. the woman was a passenger in a vehicle traveling in the 1700-block of W. Juneway Terrace when gunshots were fired and one round came through the rear window gazing her on the left side of the head.

The victim was self transported to St Francis Hospital and is listed in critical condition. Area 3 Detectives are investigating

No one is in custody.

Earlier Sunday, three people were injured in a drive-by Sunday in Austin on the West Side, Chicago police said.

According to police, around 4:26 a.m. the three people were outside among a group in the 500-block of North Menard Avenue when an unknown occupant inside of a passing vehicle fired shots, striking them each.

The last victim, a 37-year-old woman, suffered a gunshot wound to the leg and was transported to Mount Sinai in fair condition. No one is in custody and Area Four detectives are investigating.

A few minutes earlier, Chicago police officers responded to a ShotSpotter alert Sunday morning around 3:54 a.m. in the 1300-block of N. Mayfield Avenue and discovered a 28-year-old man lying unresponsive on the sidewalk with multiple gunshot wounds to the back and face, police said.

The victim was subsequently pronounced dead on scene, police said. There are currently no witnesses to this incident and no one is in custody.

The Cook County medical examiner’s office has not released any further details about the death.

An 8-year-old girl was injured Saturday night when a bullet flew through the window of an Englewood home on the South Side, Chicago police said.

According to police, the girl was sitting on the couch around 11:18 p.m. inside a residence in the 6600-block of S. Wood Street when a stray bullet came through the window, grazing her head. She was transported to Comer Children’s Hospital in fair condition and there is no one currently in custody.

Area One detectives are investigating and it is currently unknown where the shots were fired from.

A 10-year-old girl was shot in the head by a stray bullet in the Logan Square neighborhood Saturday night around 9:40 p.m, police said. She was taken to Stroger Hospital, where she was pronounced dead, police said. The Cook County medical examiner’s office hasn’t released details about her death.

Two men were shot Saturday by a robber in the Lawndale neighborhood. At about 5 p.m., the men 29 and 31, were in the hallway of a residential building in the 3300 block of West Douglas Boulevard when someone walked in with a gun and demanded property, Chicago police said. The robber opened fire, striking the 29-year-old several times. He was taken to Mt. Sinai Hospital in critical condition. The 31-year-old was taken to Stroger Hospital but is expected to be okay. Area Four detectives are investigating.

A man of a unknown age was shot and killed Saturday around 3:51 p.m. in the 4400 block of South Kedzie. Officers found the victim with a gunshot wound to his head, according to police. He was transported to Mount Sinai Hospital where he died.

A man, 28 is in critical condition after he was found shot in the 7600 block of South Phillips in the city’s South Shore neighborhood at around 3:50 p.m. Saturday. Police said the he was shot in the chest, neck and arm. Area Two detectives are investigating.

A 1-year-old boy was killed and his mother was injured in a shooting in Englewood Saturday afternoon, Chicago police said. Police said the the shooting occurred near Halsted and 60th around 2 p.m.

A Chicago Police Department spokesperson said the mother was driving with her child when another vehicle pulled up and someone fired shots, striking the boy and grazing the mother in the head. The child was in a carseat in the back of the vehicle when he was shot. The mother then drove to St. Bernard Hospital, where the child was pronounced dead.

A man, 37 was shot while sitting in his parked vehicle at around 12:08 p.m. Saturday near 80th and Exchange, when someone approached him and fired shots, striking the victim. He was transported to South Shore Hospital in stable condition, according to police.

A 17-year-old boy died at Christ Hospital after he was shot around 11:25 a.m. Saturday. Police said, the teen was with a large crowd of people in the 1100 block of North Monticello in Humbold Park, when he got into an altercation, and someone from the group fired a gun, striking him in the chest. Area Four detectives are investigating.

An hour earlier, a man, 25, was killed in apparent drive-by shooting in the 1300 block of South Springfield in North Lawndale. Police are searching for a Silver colored vehicle in that shooting.

A man, 20, was shot in the chest and arm at around 9:53 a.m. Saturday in the 4400 block of West 28th Street in Little Village. He was taken to Mount Sinai hospital in fair condition.

About a half hour earlier, two men were wounded in a shooting at 9:24 a.m. in the 3100 block of West Flournoy in the city’s Lawndale neighborhood. Police say the 48-year-old and 39-year-old were standing outside a home when someone walked up to them and fired shots. The offender left in an unknown vehicle, according to police.

A man in his 30s was pronounced dead after he was shot in the head in the 5600 block of South May in Englewood at around 6:50 a.m. Saturday morning. Police said he was found sitting in his vehicle when witnesses say they heard shots and saw a 2003 Nissan flee the scene.

A man, 33, died at the hospital after he was shot multiple times during a domestic-related incident at 6:20 a.m. in the 9300 block of South Lyon in Burnside. The victim was shot by a woman he was choking at the time, according to police.

A man, 25, drove himself to Mount Sinai Hospital after suffering gunshot wounds to the neck and face. He is currently in critical condition. The circumstances surrounding the shooting are not known because the victim is unable to speak, police said.
A man fled after shooting a 50-year-old man in the hand around 4:50 a.m. Saturday in the 800 block of East 81st Street. Police said the two men are friends and had been arguing.

A ride share driver, 46, suffered a graze wound to the back while dropping off a customer in the 2200 block of West 21st Place in the Heart of Chicago neighborhood at 1:33 .am. early Saturday morning. According to police, the gunman was standing on the corner with a group. The driver did not appear to be the target, according to police.

RELATED: Uber driver shot while dropping off passenger in Heart of Chicago

A man, 27, suffered a gunshot wound to the leg just after midnight Saturday in the 600 block of West Lawrence in Uptown. No one is in custody but detectives investigating say the victims is known to police.

Area One Detectives are investigating after a 46-year-old man was shot around 7:30 p.m. Friday in the 5200 block of South Wood. He was transported to the hospital in good condition.

A man 42, was shot and killed Friday around 5:42 p.m. in the 200 block of North Leclaire Avenue as he stood on a sidewalk. According to Chicago police, an unknown offender came out of an alleyway and shot him in the head. No one is in custody.

Less than hour earlier around 6:13 p.m., a man, 41, was wounded in what appeared to be a drive-by shooting in the 2700 block of South Kedvale. The victim was taken to Mount Sinai Hospital in stable condition, according to police.