660 flags planted to save more vets from suicide 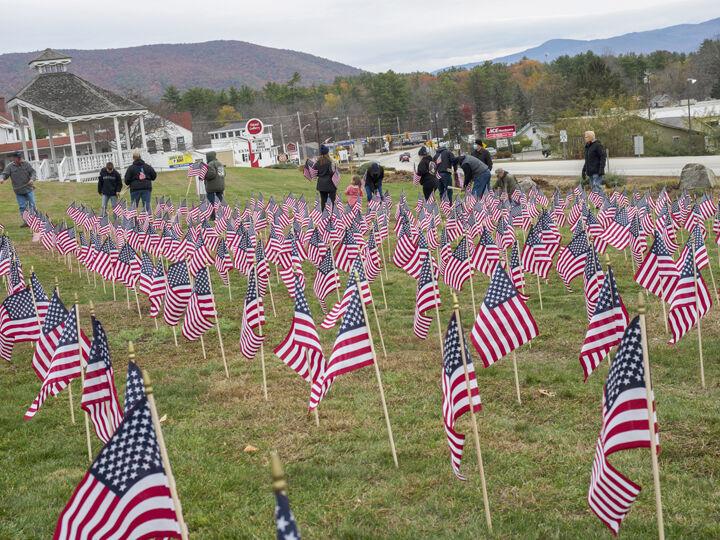 CENTER HARBOR – Chadd Adams had just turned 13 when terrorists attacked the United States on Sept. 11, 2001. His father was a firefighter, and the coverage of the attacks, the heroism at Ground Zero and the military response stirred his sense of patriotism. He wanted to join that response, his mother said, and he wanted to fight for his country as a member of the U.S. Marine Corps.

That’s just what Adams did. He served two tours with the Marines, but when he came home, his country didn’t fight as hard for him as he had for his country. He struggled for eight years to re-enter civilian life, but gave up that struggle on December 15, 2019, when he took his own life.

It’s because of veterans such as Adams that a field in Center Harbor is filled with flags this month.

Flags for the forgotten

Carla Taylor’s father served his country during the Vietnam War, but, she said, his country didn’t fulfill its obligation to him when his health started to suffer due to exposure to the chemical known as “Agent Orange.” Now, she sees a similar disservice to the mental health of veterans, evidenced by the rate at which they commit suicide.

When Taylor’s father, Eugene Burress, Jr., died a couple of years ago from what she called “Agent Orange-related illness,” she said she was flooded with anger. “It made me angry that the man who loved his country and served his country, that they didn’t take better care of him.” That led her to found Humble Grunt Work, a veterans’ recognition group that aims to honor veterans. This November, Humble Gruntwork installed 660 American flags on a grassy lawn in Center Harbor, each flag representing one of the veterans who are estimated to die by their own hands each month.

“They are essentially the forgotten. That display represents the soldiers that came home and we forgot the terror they’ve seen, and we haven’t taken care of them,” Taylor said. “It’s one more step of honor that we need to bring right for these guys. We can save some of these guys if we all get together.”

Suicide is a problem for all Americans – the CDC lists intentional self-harm as one of the top-10 leading causes of death in the U.S. It’s even worse, though, for veterans. According to the 2019 National Suicide Prevention Annual Report, published by the Veterans’ Administration, veterans kill themselves at a rate of 1.5 times that of the general population.

The 2019 report was based on data collected from 2005 to 2017, and it found the suicide rate among veterans rose during that time. Taylor and others concerned about this issue worry that the stress, anxiety and isolation brought on by the coronavirus pandemic could make 2020 an even darker year.

Heidi Adams, Chadd’s widow and mother to their three-year-old daughter, Raegan, had known her late husband for most of his life, as their respective families were friends. They grew up together in Nashua and started dating when she was 17, he was 18.

“He was so fun and easy to be around,” Heidi said. “He was that kid in high school that was friends with every single group. No matter what classroom he walked into, he always had friends.”

They got married in 2009, and when Chadd returned home from his second tour two years later, Heidi said she could see in his eyes that something was wrong – the spark of the man she married was gone. Instead his eyes were “dim,” she said.

Chadd’s mother saw it, too. Lisa Adams said the family went to a school to welcome his return.

“They came into a gymnasium. Just the look about him, we knew that he was different,” she remembered.

It had been a particularly difficult deployment, Heidi said.

“That was a rugged deployment. He had lost quite a few friends along the way,” Heidi said. And, she said they later found out, Chadd served his second tour while bearing an invisible injury. At the beginning of that deployment, the Humvee he was riding in rolled over an explosive device. Chadd bore no visible injuries, and the symptoms he described afterward were chalked up to a concussion. After he came home, though, a scan showed that he sustained a traumatic brain injury.

Chadd also displayed the classic symptoms of post-traumatic stress disorder, Heidi said. “There were a couple of times when he suffered flashbacks, he was angry and irritable and depressed, and quite anxious.”

Weeks after returning from combat, Chadd was discharged from the Marine Corps. Although he was no longer enlisted, he couldn’t change his mental state, his mother said.

“He was hyper vigilant, he would call everyone ‘civilian,’ he couldn’t come back to civilian life. He tried,” Lisa said, but he would often return to the refrain, “You civilians don’t understand.”

Lisa and Heidi said that it was clear to everyone around him that Chadd needed help. They tried to get that help for him, they said, and the closest they got was the Home Base program administered by Massachusetts General Hospital. Chadd didn’t stick with that program, though. “What I think happened is that when the therapy got too intense, he couldn’t handle it and shut down,” Lisa said.

Twice in 2019, Chadd was in such a crisis that he sought emergency services. In retrospect, that might have caused as much pain as help, Lisa said, because each time he ended up held in a crowded hospital “annex” while he waited for space at an inpatient mental health facility.

“It did not help him at all, it made him feel like a caged animal,” Lisa said. “He sat in a room with a paper gown on for weeks waiting for a transport. That didn’t make him feel better at all.”

Military life is challenging, said Kurt Webber, one of the founders of the Patriot Resilience Leadership Institute, founded about seven years ago in Gilford. “You are dealing with all types of stresses that can lead to issues with any service member,” he said. Those who have been in combat were exposed to traumatic experiences, he said, but even those who served in peacetime or in noncombat roles might have endured sexual trauma, or have survivor’s guilt.

PRLI was founded to assist veterans who are having trouble in civilian life. The organization offers outdoor adventure-themed retreats, with peer-to-peer counseling overseen by clinical professionals.

“We recognize that there’s a need throughout the veteran community,” said Webber, noting that his organization serves veterans of all conflict eras. “Most of our retreats have been multi-generational, and we think that’s a real strength of the program. It’s cool to see a 70-something Vietnam War vet open up to a 20-something Afghanistan vet, and vice versa.”

The goal of the camp is to put veterans who are struggling face-to-faces with someone who knows what they’re going through.

Dr. Peggy Laneri, a West Point graduate and retired Lieutenant Colonel, is a retired VA psychologist who was director of the Worcester Veteran Center, in Worcester, Massachusetts. She serves on the board of PRLI, and said PTSD is a normal reaction to sustained or repeated stress levels.

For a person without PTSD, common occurrences such as being cut off in traffic or being surprised by a loud sound can trigger what she called the body’s “fight or flight” responses: blood pressure and heart rate rise, and the person experiences a state of hyper awareness necessary to survive a life-or-death situation.

“If you do not have PTSD, you come back down,” Laneri said. “But if you do it over and over, your nervous system is taxed and weakened,” and it is harder to return to a relaxed state. “It’s the wear and tear on the autonomic nervous system. That’s the root cause of post-traumatic stress. If you come back and have a really good support system around you, that certainly helps

Depression and anxiety, two of the calling cards of PTSD, can result in the afflicted person drawing into themselves and away from social interactions. That’s a dangerous move, because it leaves the person alone with their trauma and without the comfort of people who care about them. It’s particularly problematic in rural parts of the country, such as New Hampshire, where there isn’t ready access to support.

Webber, in addition to running PRLI, serves on the steering committee to form the Lakes Region Veterans’ Coalition, part of a VA initiative called Together with Veterans. The goal is to create a network of support for veterans in rural areas, with suicide prevention in mind. It couldn’t come soon enough.

With “Safer at Home” restrictions and social distancing measures in place to prevent the spread of the coronavirus, Carla Taylor, founder of Humble Grunt Work, worries that veterans might be particularly vulnerable in 2020.

“It’s limiting their gathering, it’s limiting the places they go,” Taylor said. Often, veterans form their own informal support groups, she said, meeting with others once a week. Those meetings might not have been happening for months now, she said. “It’s not allowing them to do that freely. If they’ve lost their wife, all they have is those guys that they go to see at the coffee shop.”

“Everything is harder during COVID. It really is. Isolation mixed in with uncertainty, anxiety about ‘Will this ever end?’ It’s a very stressful time,” said Laneri, the psychologist.

A third is a feeling of low self-worth, something that Webber said he has encountered at  times during the more than 60 retreats his organization has led. “I remember at least one or two of the veterans saying, ‘I didn’t think I deserved help.’”

Chadd’s death was “shocking,” Heidi said, but considering how long he had suffered, “it wasn’t out of the blue, because he had been unwell for so long.”

She said that she wished there had been more support for him, especially immediately after his deployment. Veterans should be told what to expect about re-integrating into society, and told how to look after their emotional and mental well-being, she added.

“If I had one more chance to talk to Chadd, I would make sure that he knew that I love him and supported him as best as I could, and that love will never change, no matter what happens in our life or his life or the outcome of the situation,” Heidi said.