A rescue ship, funded by enigmatic British street artist Banksy—who had been impressed by the ship’s ‘badass” captain—is stranded in the Mediterranean Sea after rescuing 130 migrants from a sinking vessel off the coast of Libya. 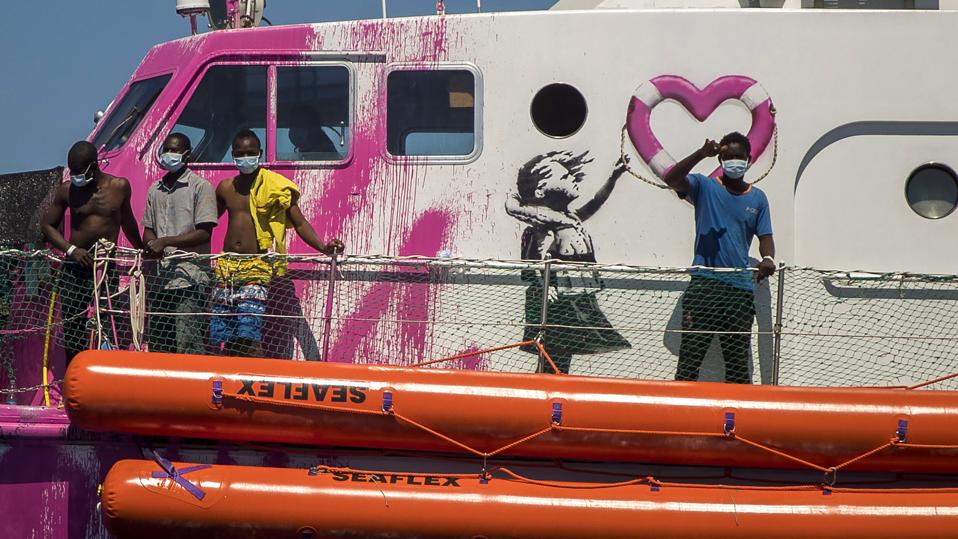 A boy waves to the crew of the Astral rescue vessel from the deck of the Louise Michel rescue … [+] vessel, a French patrol boat currently manned by activists and funded by the renowned artist Banksy in the Central Mediterranean sea, at 50 miles south from Lampedusa, Friday, Aug. 28, 2020. A Berlin-based group says it has begun migrant rescue operations in the Mediterranean Sea with a bright pink former navy vessel sponsored by British artist Banksy. The group operating the MV Louise Michel, a sleek 30-meter (98-foot) ship named after a 19th century French feminist and anarchist, said late Thursday that it rescued 89 from an inflatable boat in distress. (AP Photo/Santi Palacios)

The Louise Michel rescued 130 people from an overcrowded dinghy that was taking on water and in danger of sinking on Friday after responding to a distress call from the Moonbird, an aircraft that monitors migrants’ boats in danger in the central Mediterranean.

The crew had already rescued 89 refugees on Thursday, including 14 women and four children—but hadn’t yet found a safe port for them to disembark.

The Louise Michel, a former French navy ship with a ten person crew financed and decorated by Banksy, has a capacity of 120 people.

The 130 passengers were left alone in the Malta search and rescue zone, according to the crew of the Louise Michel, and as of early Saturday there had been no response to calls for help from Malta, Italy or Germany, despite constant pleas for help.

After over 12 hours stranded at sea, an Italian Coast Guard ship arrived Saturday afternoon and evacuated 49 of the most vulnerable passengers, though the ship was still overcrowded and unable to move.

Another rescue vessel, the Mare Jonio, said Saturday it was leaving the port of Sicily 48 hours ahead of schedule to aid the Louise Michel.

Banksy’s humanitarian ship left port from Burriana, Spain on August 18 and has since been patrolling the Mediterranean for refugees in distress. His history with the Louise Michel’s rescue mission goes back to September 2019, when he sent an email to former rescue vessel captain Pia Klemp. “Hello Pia, I’ve read about your story in the papers. You sound like a badass,” he wrote, according to The Guardian, “I am an artist from the UK and I’ve made some work about the migrant crisis, obviously I can’t keep the money. Could you use it to buy a new boat or something? Please let me know. Well done. Banksy.” Klemp said the goal of the Louise Michel, which is smaller and faster than most humanitarian ships, is to “outrun the Libyan coast guard before they get to boats with refugees and migrants and pull them back to the detention camps in Libya.” International organizations have accused the Libyan coastguard of mistreating refugees at sea and even selling them off to militias at Libyan harbors. The United Nations Refugee Agency called Saturday for the immediate disembarkation of the Louise Michel, along with three other ships carrying refugees bound for Europe, and for EU Member States to provide more support to countries at the forefront of receiving sea arrivals of refugees in the Mediterranean.

In an instagram post introducing the Louise Michel, Banksy said, “Like most people who make it in the art world, I bought a yacht to cruise the Med. It’s a French Navy vessel we converted into a lifeboat because the EU. authorities deliberately ignore distress calls from non-Europeans. All Black lives matter.”

Banksy’s ship is named after French anarchist, revolutionary and teacher Louise Michel, one of the leading figures of socialist and feminist thought in late 1800’s France. She worked with the ambulance service during the German siege of Paris and helped the National Guard defend the Paris Commune in 1871.