After Portland shooting, Trump and Biden allies trade blame for clashes across the country – POLITICO

At least a half-dozen Democrats appeared across the spectrum of Sunday political talk shows, where they condemned violence, pilloried the president and made clear that he’s responsible for what’s happening in this country.

“We are not safe in Donald Trump’s America,” Sen. Amy Klobuchar of Minnesota added on ABC’s “This Week.”

White House chief of staff Mark Meadows, however, argued that it’s “just not accurate” to “reframe it that way.” 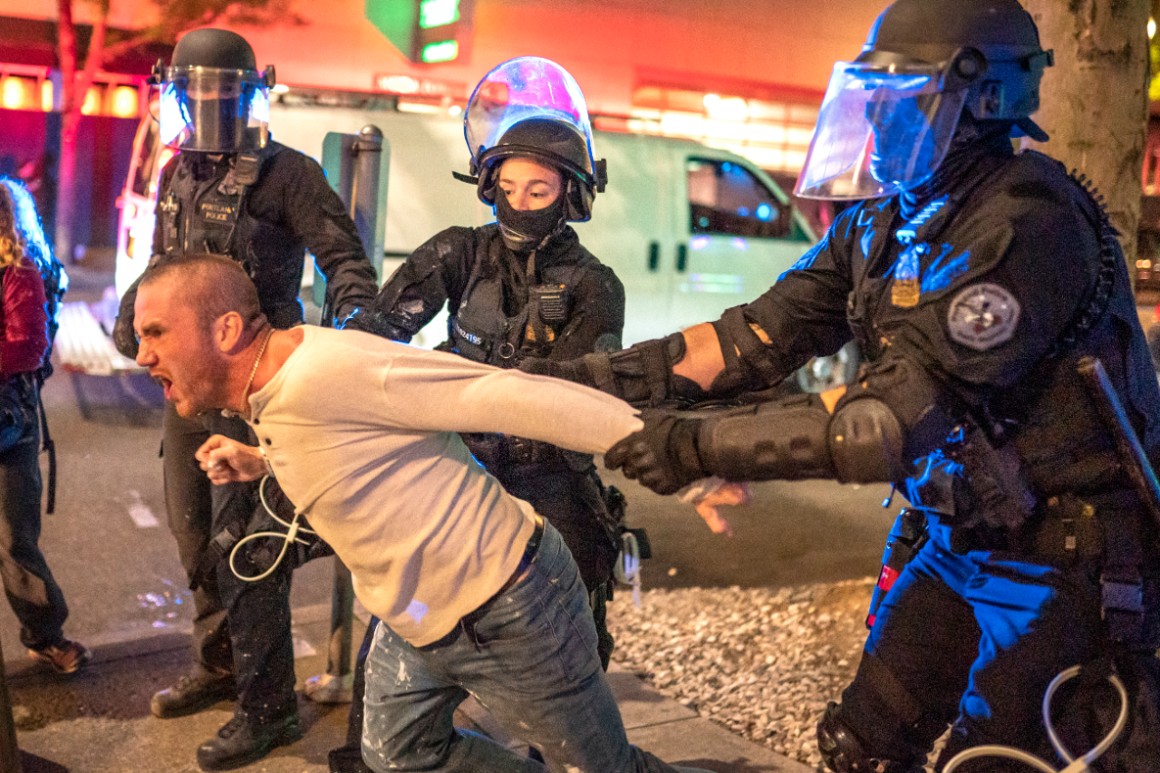 Portland police hold back a man who was with the victim of a fatal shooting as he reacts in minutes after the incident on August 29, 2020 in Portland, Oregon. | Nathan Howard/Getty Images

A man whose hat bore the insignia of a far-right group called Patriot Prayer was fatally shot late Saturday during a clash between Trump supporters and counter-protesters, capping a violent week in America that began with a white police officer shooting Jacob Blake, a Black man, in the back seven times in Kenosha, Wis., last Sunday. Two days later, a white teenager from Illinois allegedly shot three people in Kenosha, killing two of them.

Trump will travel to Kenosha on Tuesday to meet with local law enforcement. Lara Trump, the president’s daughter-in-law and a senior campaign adviser, said the president had reached out to Blake’s family, but it’s unclear whether they will meet this week.

“I’m sure, given the opportunity, he would be more than happy to do that,” she said on “Fox News Sunday.” “But I haven’t gotten that information just yet.”

Despite outgoing White House counselor Kellyanne Conway telling Fox News last week that more chaos, anarchy, violence and vandalism were “better” for the president’s campaign, Lara Trump said that violence was “never something any of us would want to see happen.”

Recalling what she described as an “anarchist mob” that encircled Sen. Rand Paul (R-Ky.) and his wife outside of the White House after the president’s nomination acceptance speech on Thursday, Lara Trump said, “You didn’t see that happening on the other side,” because “that would never happen.”

“It only goes one way,” she added.

Biden, the Democratic presidential nominee, is planning to address the nation this week in a unifying speech that will showcase his leadership, according to his campaign, but it’s unclear whether he will travel to Wisconsin.

To Conway’s point, recent polling indicates that white suburban voters would feel less safe in a Biden administration, something the Biden campaign rejects.

“I think suburban voters are looking around at what’s going on in this country and they’re looking at who’s in the White House and they’re seeing Donald Trump. They don’t see Joe Biden,” Kate Bedingfield, Biden’s deputy campaign manager, said on “Fox News Sunday.” “They see Donald Trump in the White House. This is Trump’s America. The chaos that suburban voters are feeling and that voters all across this country are feeling is a result of Donald Trump’s failed leadership.”