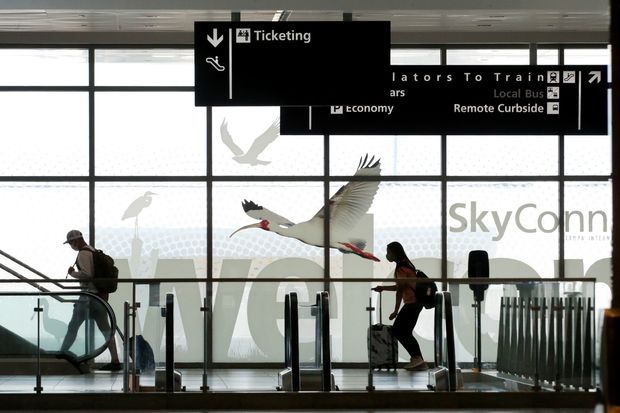 Competition is intensifying as airlines restore or expand flights on a limited number of popular routes.

Millions of passengers have yet to return to flying since the pandemic started, but cash-strapped airlines are showing they are ready to compete fiercely for those who do travel.

Relaxing domestic ticket-change fees will cost airlines hundreds of millions of dollars in lost revenue when passenger bookings start to improve, but it is a loss aimed at winning back customers. Meanwhile, competition is intensifying as airlines restore or expand flights on a limited number of popular routes.

“It does seem like airlines are trying to take a little bit of their neighbors’ business,” said Andrew Watterson, chief commercial officer at Southwest Airlines Co.

United Chief Executive Scott Kirby said he doesn’t expect demand to reach 50% of prepandemic levels until a vaccine or treatment becomes widely available, and the industry expects it could be three or four years before 2019 passenger levels are regained.

Chicago-based United said Friday that it planned to fly 46% of its schedule in October compared with the same month last year. It is restoring service on 50 routes and limiting flying on quieter days by reducing frequencies, targeting customers seeking weekend getaways.

Among the flights being restored by the industry include those to Mexico and the Florida beach markets as well as destinations including Colorado that offer outdoor pursuits. Southwest is adding flights for the first time to Miami and Palm Springs, Calif., with American targeting passengers headed to Florida and Mexico. However, flying is being reduced to dozens of other cities as the industry shrinks.

United’s move to kill change fees—at a time when demand, flying schedules and passenger behavior are in such flux—is a sign that airlines are taking competitive risks sooner than many investors expected, Stifel airline analyst Joe DeNardi said.

U.S. carriers are still burning around $6 billion in cash each month, according to trade group Airlines for America, and have responded by furloughing staff, retiring old planes and deferring new aircraft deliveries. Industry employment has fallen by over one-fifth to 400,000 since the start of the year, the Labor Department said Friday.

By itself, the loss of revenue from relaxing the fees is limited, and airlines have some relief from fuel prices, which are down about 40% from a year ago. Still, items like change fees, baggage charges and loyalty programs have been largely immune from competitive pressures in recent years as carriers kept charges broadly similar, Mr. DeNardi said. Many network airlines added charges for things that were once free—including seat assignments and bags—matching the approach of fast-growing low-cost rivals such as Spirit Airlines Inc. SAVE 0.85%

Mr. Kirby said removing the fees permanently was the top request in customer surveys about what would encourage them to fly again. United collected $625 million in change and cancellation fees last year, or $3.82 per passenger, compared with $819 million at American and $830 million at Delta. Revenue from bag fees had been running at about twice that level.

Mr. Watterson said that absent the sales from change fees, U.S. carriers may have to raise fares to cover the loss, equivalent to around 4% of their operating revenue. U.S. domestic fares have been erratic, up 4.5% from a year earlier in the seven days to Aug. 24 but down in four of the six preceding weeks.

The timing of United’s move puzzled Mr. Watterson and executives at other low-cost carriers as airlines are already waiving the fees through the end of the year. U.S. airlines raked in $2.8 billion from them last year, according to Transportation Department data, and analysts estimate more than half came from domestic tickets. The existing freeze on these fees meant airlines were already operating without the added revenue.

After an unprecedented drop in air travel due to the coronavirus, passenger airlines are being forced to make long-term, make-or-break decisions at a time of great uncertainty and minimal cash flow. So how are they planning to survive? WSJ finds out. Composite: George Downs/The Wall Street Journal

U.S. airlines’ change and cancellation fees have crept up over the past decade to an average of $200 per ticket from around $25 when first introduced at the end of the last recession. While wildly unpopular with fliers, executives said they helped segment leisure travelers from the business fliers who generate twice as much profit per passenger.

The fees have long been waived by airlines for big corporate travel accounts, even before the pandemic, but most domestic business travel is booked in coach and was subject to the charges, said Southwest, which never charged change fees or extra for bags. The airline has made a big push in recent years to attract more business passengers.

Passengers will still have to pay any difference between ticket prices if they change tickets, and refunds often come in the form of credits, which has left some frequent fliers unimpressed.

“I don’t have time to chase them down for the value of that ticket later on,” said Bianca Thrasher-Starobin, a 41-year-old Atlanta-based lobbyist and small-business consultant. “I don’t fly that airline regularly. They bank on that.”

The next time you fly, for what would you be willing to pay extra? Join the conversation below.

The big carriers will continue to levy change fees on international tickets when the current moratoriums expire, and exempted their cheapest tickets—often branded as basic economy—from the moves. These will continue to be nonrefundable.

Ultra low-cost carriers such as Spirit and Frontier Airlines do incorporate change fees, usually as add-ons to their lowest fares that passengers can purchase to allow them to change or cancel flights.

American went a step further than United and used its announcement on canceled fees to announce changes to its basic economy product, with passengers now able to pay for an upgrade from the cheapest ticket.

Vasu Raja, American’s chief revenue officer, said the absence of so-called road warriors is providing airlines with an opportunity to flaunt basic economy tickets to fliers with little or no loyalty. He said 60% of its passengers right now have no loyalty status with any airline frequent-flier program or branded credit card. So loosening restrictions on its own stripped-down basic economy fares makes sense to lure and retain customers as future fliers, he said.

Write to Doug Cameron at doug.cameron@wsj.com