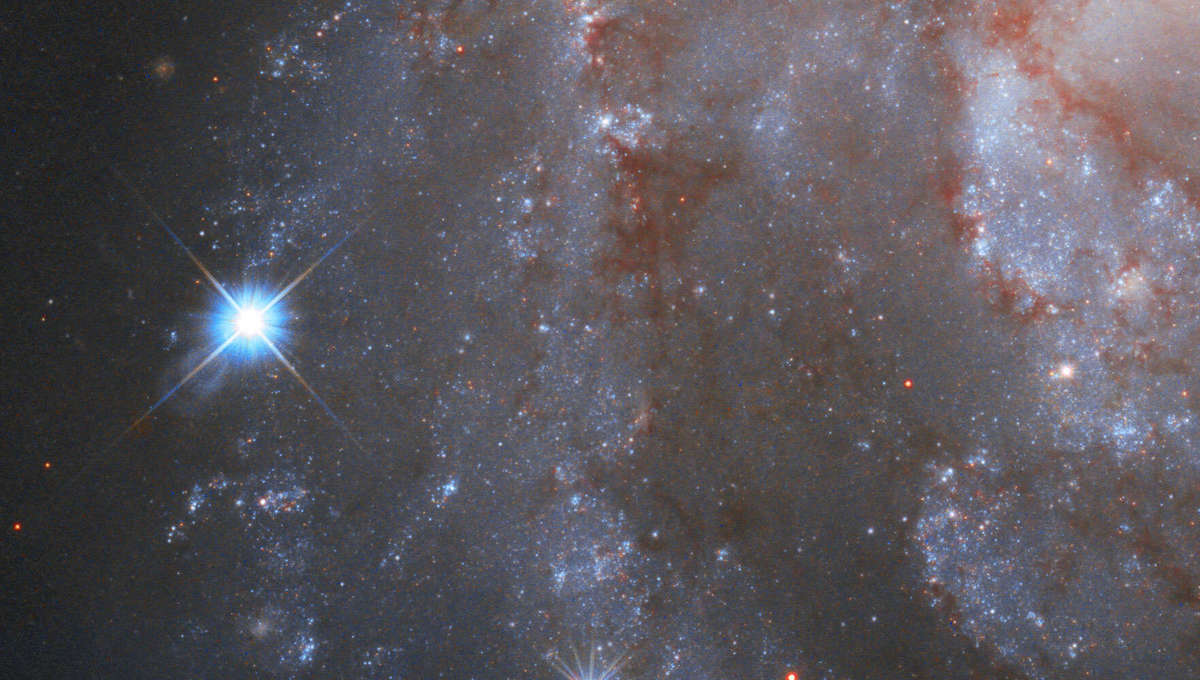 NGC 2525 is a spectacular spiral galaxy located about 70 million light years away in the direction of the constellation Puppis. As galaxies go, that’s relatively close to us — the Universe is a bit roomy, folks — and that makes it an excellent target for astronomers who want to understand how the Universe is expanding.

That’s because every now and again, a star in a galaxy will explode. And not just any star, but a white dwarf. These can explode in one of a couple of ways; it can collide with another white dwarf, or, if it’s in a binary relationship with a normal star like the Sun, it can steal material off a companion star which builds up on the white dwarf’s surface, eventually detonating like a thermonuclear bomb.

When that happens, the star explodes, tearing itself apart in a colossal supernova. These brighten rapidly, generally peaking in a couple of weeks, and then fade over months and years. They all tend to explode with the same brightness (once you correct for a few factors that vary between specific stars), and that makes them what we call standard candles: If you can measure how rapidly it brightens and how bright it gets, you can determine its distance. These supernovae can be seen clear across the Universe, so they help us measure how rapidly the cosmos is expanding.

But we need to observe ones that are close by first, to make sure we understand all the details to the process.

In early 2018, one such white dwarf tore itself apart in NGC 2525 in an event called Supernova 2018gv. As part of an ongoing program to observe such beasts, Hubble was aimed that way, well over a dozen times over the course of the next year or so, observing the supernova to watch it fade over time. Astronomers put together an amazing time-lapse video of the sequence, showing the tremendous explosion dimming:

Video of Time-Lapse of Supernova in NGC 2525

Remember, you’re watching year’s worth of emission from a dead star with 1.4 times the mass of the Sun compressed into a ball the size of the Earth possibly completely blowing itself to bits, releasing energy at a rate billions of times the Sun does, giving off as much energy in that year as the Sun will over its entire 12 billion year lifespan, and it’s happening 700 quadrillion kilometers away, and you can see it at all thanks to an observatory the size of a school bus orbiting the Earth more than 500 kilometers above your head.

Just in case you need some context.

It was supernovae like this one that first clued astronomers in to the fact that the universal expansion rate is accelerating, which means that not only is the Universe getting bigger, but the rate it gets bigger is itself increasing. This discovery in 1998 led to the idea of the existence of dark energy, the force behind the acceleration. Two teams of astronomers found this at essentially the same time; one of them included my friend and colleague Adam Riess. He’s the one leading the team now using Hubble to look at these supernovae in nearby and distant galaxies, including NGC 2525 and SN 2018gv.

Video of Zooming Into NGC 2525

The beauty of using Hubble for these observations is that it’s very stable; conditions don’t change much for it over time between observations, so comparing them is easier. It also has exquisite eyesight, allowing the supernova light to be separated from the light of the many stars around it. Not only that, but Hubble can also see in ultraviolet and infrared wavelengths which are absorbed by our air, making that light difficult if not impossible to observe from the ground.

I’ll also note that the supernova itself was discovered by amateur astronomer Koichi Itagaki, and when he announced it several large observatories promptly took a look, with Hubble getting in on the action a few weeks later (it takes time to tell the ‘scope where to point; typically targets are loaded up weeks in advance, but the schedule can be interrupted for “targets of opportunity” like supernovae).

It took astronomers of all kinds and telescopes all across the world — and above it — to get the goods on this exploding star.

Sometimes, when you want to understand the nature of the Universe, it takes an entire planet to do so. It’s yet another thing I love about astronomy and science.