American excess is back with the 1,000hp 2022 GMC Hummer EV truck – Ars Technica 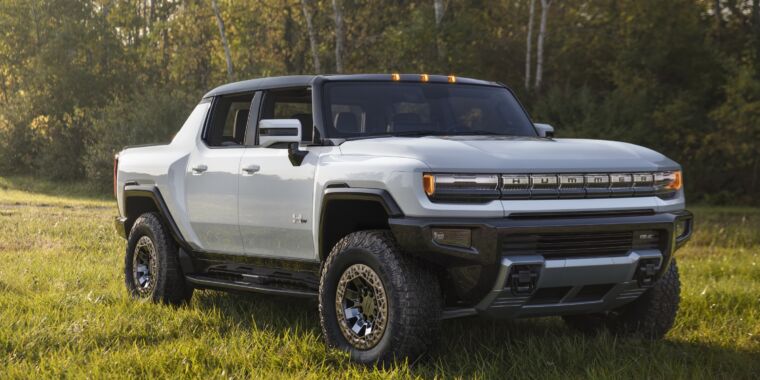 184 with 104 posters participating, including story author

On Tuesday night, and after a long teaser campaign that included a Super Bowl advert, GMC introduced its new Hummer EV to the world. The Hummer EV is the first of a promised onslaught of new electric vehicles from General Motors, but for real, unlike the last time GM promised such a thing. It’s also the company’s first battery electric vehicle since the Chevrolet Bolt EV, and it represents a complete volte-face for the automaker.

The new Hummer EV is the first vehicle to use GM’s new Ultium batteries and Ultium Drive motor family. And boy does it use them. There are 24 battery modules. Although GMC won’t give us an exact usable kWh number until it has its EPA certification, when it unveiled the Ultium packs in March it told us that the 24-module pack would boast a total of 200kWh. That should give the Hummer EV a range of 350 miles (564km), GMC says. And because the vehicle uses an 800V architecture, it can fast-charge at up to 350kW, adding 100 miles (160km) of range in 10 minutes, we’re told. (As a reminder, GM recently partnered with EVgo to deploy 2,700 new DC fast chargers.)

There is a total of three permanent magnet electric motors—one powering the front axle and a pair at the rear, each driving its own wheel. If a thousand horsepower doesn’t sound big enough, GMC quotes 11,500lb-ft of torque, but that’s at the wheels, not the motor. The company says that the different ratios between the front axle (13.3:1) and the rear (10.5:1) mean that wheel torque is more appropriate. However, Jason Fenske at Engineering Explained calculates that to about 1,000lb-ft at the motors.

GMC might have given the Hummer a supercar-quick zero-to-60 time, but Hummers are cemented in our consciousness as being for invading foreign countries, not racing at the drag strip. And when you stomp all over someone else’s border, that means you might need to go where there are no more roads. So the Hummer EV has been made very capable off-road.

To help with that, the front motor has a locking differential. Since each rear wheel has its own motor, there is no need for a rear diff, but software replicates that effect when needed. As standard, it comes with 35-inch tires, and 37-inch rubber will also fit under those arches. The adaptive air suspension can raise up an extra 6 inches (149mm) to help with boulders or streams. It’s studded with camera sensors, so you don’t have to navigate those obstacles by sense of smell. And for its party trick, at low speeds, the front and rear wheels can steer in the same direction so it can crab walk.

As is the trend, the Hummer EV will at first only be available as a fully loaded Edition 1, which starts production in late 2021 (with deliveries beginning in early 2022, we expect). In fall 2022, the Hummer EV3X becomes available, nearly as feature-packed but also slightly cheaper, at $99,995. GMC says it will be another six months after that for the $89,995 Hummer EV2X, which loses one of the rear electric motors but keeps the air suspension and four-wheel steering. If you just want an entry-level one, that won’t happen until spring 2024 with the Hummer EV2 at $79,995.