CNN Underscored reviews financial products such as credit cards and bank accounts based on their overall value. We may receive a commission through The Points Guy affiliate network if you apply and are approved for a card, but our reporting is always independent and objective.

American Express announced on Monday that it will continue the process of reopening its popular Centurion Lounges, with airports in Dallas, Charlotte, Houston and San Francisco opening their doors by the end of October. The Seattle and Philadelphia locations reopened on October 5, and the remaining lounges are expected to follow in a phased format.

The issuer has also implemented a set of new health and safety protocols and practices meant to protect travelers in its lounges. Called the “Centurion Lounge Commitment,” the procedures include the option for contactless mobile check-in, capacity restrictions and reconfigured seating to allow for social distancing. Guests and employees are also required to wear masks while in the lounge, and surfaces are cleaned more frequently.

All Centurion Lounges were closed on March 21 due to the coronavirus pandemic and its drastic impact on travel demand. Alexander Lee, the vice president of travel experiences and benefits at American Express, says that Amex has been working closely with state and local health authorities in the interim to open its lounges safely.

“Our principal aim has been reopening when we feel we can create a safe environment for our employees and customers,” Lee tells CNN Underscored. There will also be enhanced screening requirements for employees, including temperature checks and coronavirus tests as needed. 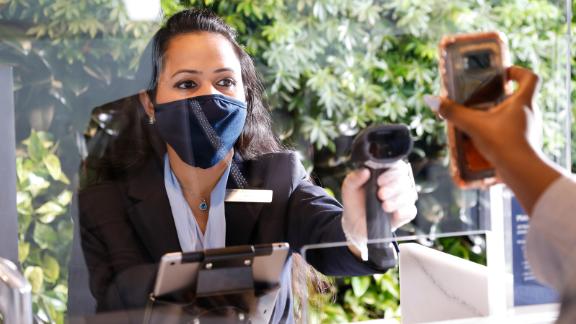 Under the new safety protocols, buffets in the Centurion Lounges are temporarily eliminated. However, the issuer still provides its premium food offerings to guests using servers. This should be welcome news to Centurion Lounge regulars, as American Express has led the way in food quality at domestic airport lounges in the United States.

When it comes to spa services and showers, it will be a while before the full experience returns. The lounge spas are limited to services without person-to-person contact. Theragun massages are taking the place of traditional massages for now, and treatment areas are sanitized between appointments. Unfortunately, showers remain temporarily closed as well.

One new policy that’s sure to cause concern is the need to reduce capacity in the Centurion Lounges due to social distancing requirements. Many lounges already had issues with overcrowding, and while travel volume is still down significantly, reduced seating capacity may lead to some card members getting turned away.

Lee tells CNN Underscored that the issuer is utilizing a waiting list tool for customers who cannot be immediately accommodated due to capacity restrictions. “The tool allows us to make sure we log them and notify them as soon as there’s capacity in the lounge” via a text message sent to their phone, he explains. Upon check-in, card members will be given guidance on how long to expect to wait. 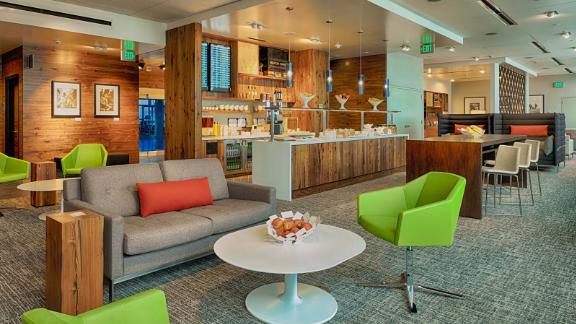 The Amex Centurion Lounge in Seattle had overcrowding issues even before the pandemic.

Opening dates for the other Centurion Lounges are not yet set, and “will depend on the metrics and conditions in each city,” explains Lee. But due to the unique service levels of the Centurion Lounges, permission by state and local jurisdictions to reopen may not be enough in and of itself to welcome guests. “There’s nothing that absolutely precludes us from operating a lounge,” says Lee. But, he adds, Amex wants to be able to provide a true Centurion Lounge experience.

So if, due to local regulations, a lounge was only able to offer food for customers to take with them instead of eating it in the lounge, American Express would likely keep it closed until it was able to provide a more aspirational experience. 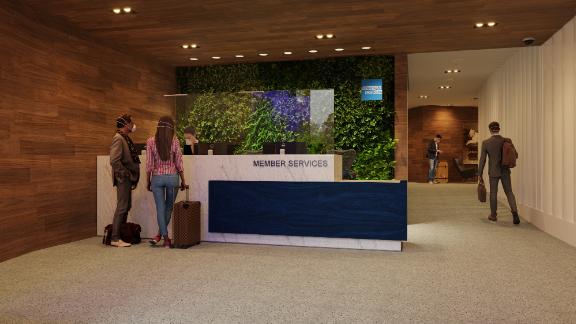 Located beyond security in the airport’s new Terminal B, the relocated lounge will double in size, adding much-needed workstations, a family room and views of the New York City skyline. Both expansions are expected to be completed in 2021.

The Centurion Lounge in Las Vegas will be able to reopen while the expansion is underway, with brief closure periods. However, the LaGuardia Centurion Lounge will not reopen until the new expanded lounge is completed.

In the meantime, the issuer says it remains committed to its Centurion Lounge network, and still expects to open its previously announced new lounges in Denver, London and New York’s JFK airport, though the timing will depend on the guidance and protocols of local health authorities.

According to Lee, the pandemic also won’t stop Amex from pursuing future Centurion Lounge expansions in new cities. “We’re still committed to our lounge proposition and to our customers,” he says. “The pandemic has changed travel for the immediate term and will have lasting effects, but as customers come back to travel, they’ll be looking to us” to be a part of their travel experience.

Access to the Centurion Lounges is one of the key benefits of both The Platinum Card® from American Express and The Business Platinum Card® from American Express as well as the invitation-only Amex Centurion cards. The personal and business cards carry annual fees of $550 and $595, respectively, and are geared toward road warriors and small-business owners.

Folks paying those fees each year will be happy to see the lounge network reopening. American, Delta and United Airlines have kept a number of their own lounges open throughout the crisis, and as of late, those airlines have also increased the pace of reopening and the services being offered.

American Express has been more deliberate about reopening its own lounges, which has been a loss for those road warriors still traveling. That makes the reopening of the Centurion Lounges extremely welcome, even if it comes one or two lounges at a time. And for everyone who’s still staying home, the current limited-time benefits on American Express cards may take some of the sting out of that annual fee until you’re able to relax with a craft cocktail at a reopened Centurion Lounge.

For more information on the reopening of the Amex Centurion Lounges, visit thecenturionlounge.com/reopening.