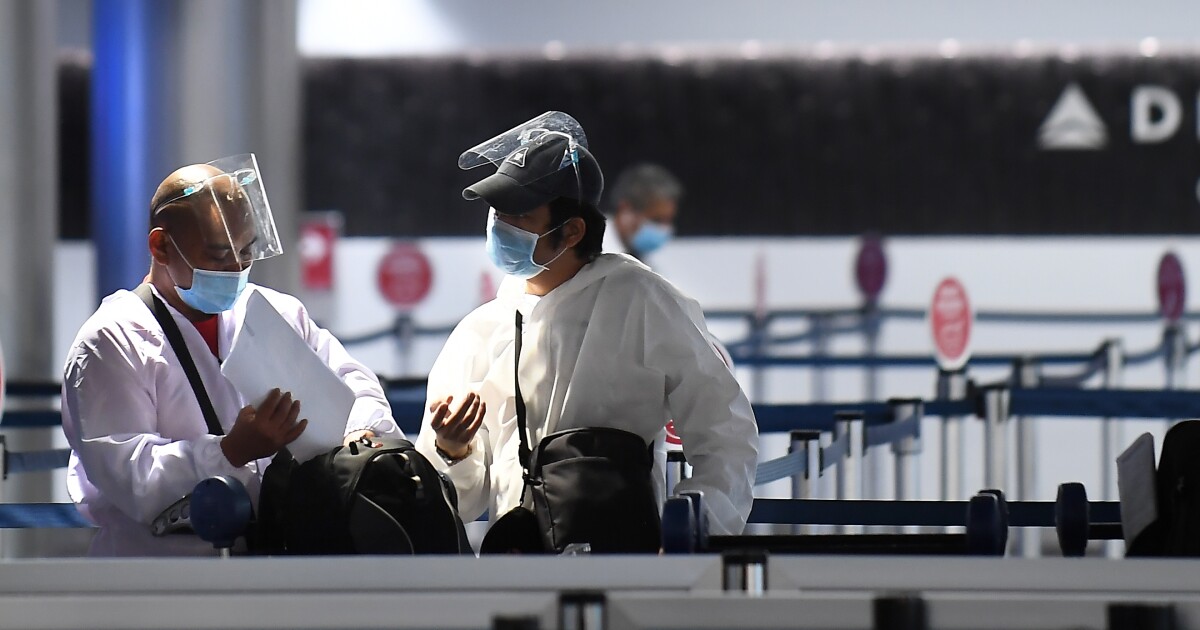 With coronavirus again surging across California, officials are faced with a narrowing number of options to slow the spread.

Weekly coronavirus cases have doubled in the last month around the state, and Los Angeles County recorded more than 6,800 cases over the weekend, an alarming spike that has officials talking about more restrictions.

The most immediate concern is the Thanksgiving holiday, which officials fear could spread the illness further if people take part in gatherings. But beyond that, officials are trying to balance the necessity of combating this latest spike with their desire to minimize further closures of businesses — already devastated by the pandemic — or to slow their reopening.

Here is a look at what officials are doing, and what’s coming:

California officials are urging those who head out of state to self-quarantine for 14 days when they return.

Though officials were quick to point out that the state travel advisory issued Friday was just that — “it isn’t a ban; it isn’t a restriction,” California Health and Human Services Secretary Dr. Mark Ghaly said — they hope that residents take the guidance to heart.

“We’re encouraging Californians to stay close to home,” Ghaly said, “to avoid nonessential travel to other states, other countries and, frankly, across the state if that’s avoidable.”

The advisory, which Gov. Gavin Newsom announced in conjunction with his counterparts in Oregon and Washington, also asks those who arrive in California from another state or country self-quarantine for 14 days.

Essential travel, as defined by the advisory, is “for work and study, critical infrastructure support, economic services and supply chains, health, immediate medical care and safety and security,” according to Newsom’s office.

One idea Los Angeles County officials have discussed is a curfew of some type designed to limit the time businesses are open and people are “mingling.” New York imposed a curfew last week on restaurants and bars beginning at 10 p.m. Only takeout orders are allowed after that.

“I think it makes sense to do everything we can to encourage people not to be out and about, not to be mingling with others,” she said. “And if we can’t make those choices ourselves, you’re forced to sort of look at, structurally, how do you make it harder for people to intermingle, particularly in activities where we know there’s going to be spread.”

Added Supervisor Sheila Kuehl: “After people drink for a while, perhaps they lose inhibition and judgment, and so possibly a curfew might help. But we would have to see if it worked in other jurisdictions. That might help us keep our businesses open so long as they are perfectly compliant.”

Los Angeles County is examining other options as well.

Among them: reducing occupancy levels at sites where people are indoors; dedicating more resources to ensuring businesses follow public health orders; and encouraging certain safety measures, such as telling everyone who can work from home to go back to doing so, Ferrer said.

Officials are trying to avoid a repeat of the lockdown California experienced in the spring.

On Friday, Ghaly said the state was “not looking, today, at a statewide stay-at-home order.”

“All of that said,” he added, “this is a quickly, rapidly evolving situation, and we will do whatever it takes to make sure that we appropriately protect the public health of California.”

Reopening businesses and activities is guided by the state’s four-tiered, color-coded system. The tiers begin with purple, the most restrictive, then shift to red, then orange, then yellow — each carrying its own limitations on what kinds of businesses can reopen and how widely they can do so.

Ghaly said the state planned to stick with the current road map, which categorizes counties based on their average daily number of new coronavirus cases for every 100,000 residents and the percentage of conducted tests that detect the virus.

“We know and feel and hear about the hurt of many businesses, and the difficulty,” Ghaly said. “But we continue to believe that this is not a choice between health and business — that that’s a false choice, that what we really need to do is do everything we can at this moment to get these very rapidly rising cases back down.”

California has generally banned large gatherings but says shorter, smaller ones of no more than three households may be held, provided they take place outdoors in the hardest-hit counties, and that attendees physically distance and wear face coverings.

Thanksgiving offers profound risks if large numbers of guests hailing from different households — especially those traveling from far away — gather. Those who are elderly or have underlying medical conditions are at particular risk for severe illness or death should they be infected with the coronavirus.

Also, taking a coronavirus test before Thanksgiving isn’t a sure way to stave off the spread of the illness. If a person is tested shortly after becoming infected and before the virus has reproduced enough copies of itself, a test could fail to detect the virus and produce a false negative result.

People can be highly contagious even when showing no signs of illness.

A negative test “should not be used as a free pass to gather with others or to not follow the basic core public health measures that are essential to keeping us all healthy,” said Dr. Christina Ghaly, Los Angeles County’s director of health services.

That’s why the safest bet is to stick to your own household for the holiday this year, public health officials say.

“I know everybody wants to know what to do for Thanksgiving, and the basic answer — to be the Grinch who stole Thanksgiving — is not to do it,” Dr. George Rutherford, an epidemiologist and infectious disease expert at UC San Francisco, said at a recent campus town hall meeting.

Feel free to make a special dinner. But to “host,” it’s safest to connect with extended friends and family through video calls or the telephone, while keeping in-person guests among only the members of your household.