For the past five months, Melinda Webster has lived on an icebreaker ship frozen in an ice floe near the North Pole.

For Webster, a sea ice geophysicist at the University of Alaska Fairbanks, it was an ideal observatory. She and a team of 14 other scientists set out, as part of the largest polar expedition ever, to study rapidly disappearing sea ice, which is often shrouded from the view of satellites by thick fog.

Protected from polar bears by armed guards, the researchers spent their days measuring every aspect of the sea ice including the snow and ice thickness, the depth of melt ponds on the surface, and the ice’s reflectivity. They wore red “survival suits” to insulate them during the occasional plunge through cracking ice into the Arctic Ocean.

“People did fall in, myself included,” Webster recounted with a laugh. “But that’s just part of it, you know.”

Braving the elements like this is part of essential research: Sea ice is a bellwether of the climate change in the Arctic. Due to our ever-increasing greenhouse gas emissions, the Arctic surface air temperatures have been warming rapidly — at twice the rate of the global average.

Historically, during the winter, sea ice has covered a vast swath of the Arctic Ocean, which fills much of the Arctic Circle. But as temperatures rise, it has been shrinking 12 percent every decade since measurements began in 1979.

Sea ice coverage fluctuates seasonally, hitting a low in September before forming again as temperatures drop in the fall — and expanding again by two to three times by the end of the winter in March. Webster and her team surveyed the summer conditions and the beginning of the “re-freeze.” But this year, that regrowth has been slower than ever. As October comes to a close, sea ice is at its lowest level for the month in recorded history.

Aboard the German icebreaker ship Polarstern, the changing ice conditions were palpable. Webster noticed in particular “just how easy it was to go across the Arctic, across the North Pole, like the ice is very thin,” she said. “It was easy to break through the ice pack, and the ship was only running on three engines rather than the full four.”

The shrinking and thinning out of Arctic sea ice is bad news for polar bears and indigenous people, who rely on the sea ice to hunt. The disappearance of the sea ice also further accelerates warming. When the white surface is replaced by a dark open ocean, more heat is absorbed and less light is reflected. According to a new study in Nature Communications, this feedback loop could add 0.19 degrees Celsius to the global temperature by mid-century, nearly wiping out the temperature effect of China going carbon neutral.

Sea ice has hit a record low for October

The overall drop in sea ice is starkly evident in the chart below. It shows this year’s sea ice levels fall well below the median from 1981-2010. What this trend means is that the formerly snow-covered sea ice of the northernmost latitudes is increasingly turning into dark blue open ocean. 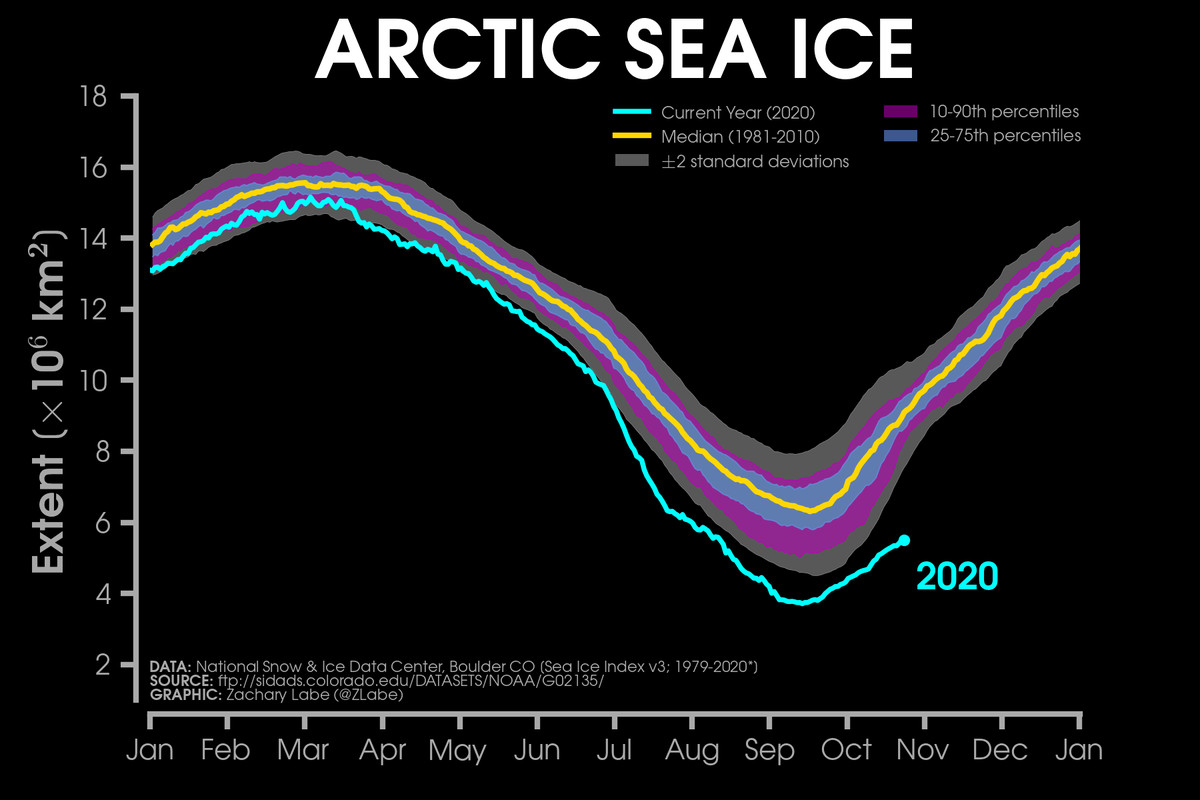 2020 produced frightening signs of the precariousness of Arctic sea ice. This month broke the record for the lowest sea ice extent in October, over 1.5 million square miles less than the 1980s average — an area larger than India, according to Labe.

This year’s sea ice minimum, which typically occurs in September after the summer melt, was also the second-lowest on record after 2012. The chart below shows how sea ice recovery in October has lagged behind the typical pattern of previous decades. 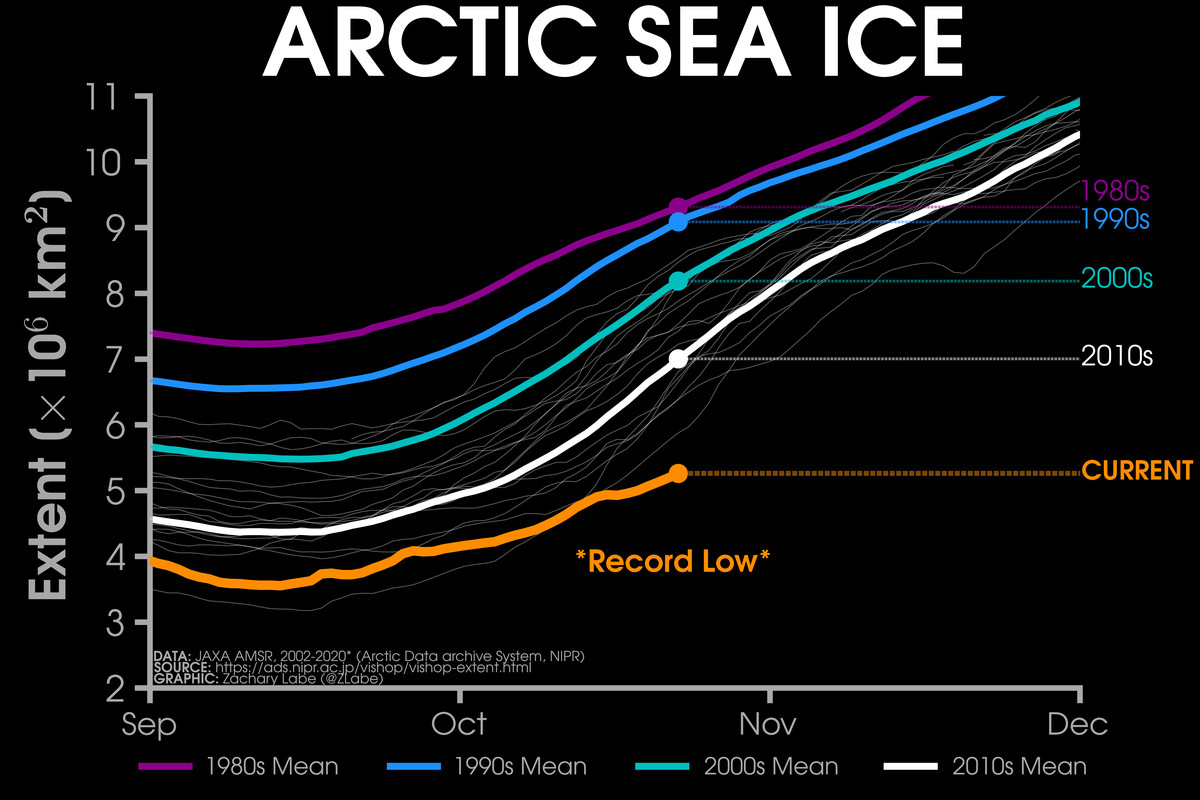 What has caused large parts of the Arctic to remain ice-free well into the fall? As Andres Flij of Severe Weather Europe points out, the Eastern Arctic Ocean (north of Siberia) has been several degrees Celsius warmer than the 1981 to 2010 average. These warm temperatures are making it difficult for ice to form.

The chart below shows that the Eastern Siberian, Laptev, and Kara seas (all part of the Eastern Arctic Ocean) have had particularly low sea ice formation compared to the recent past. 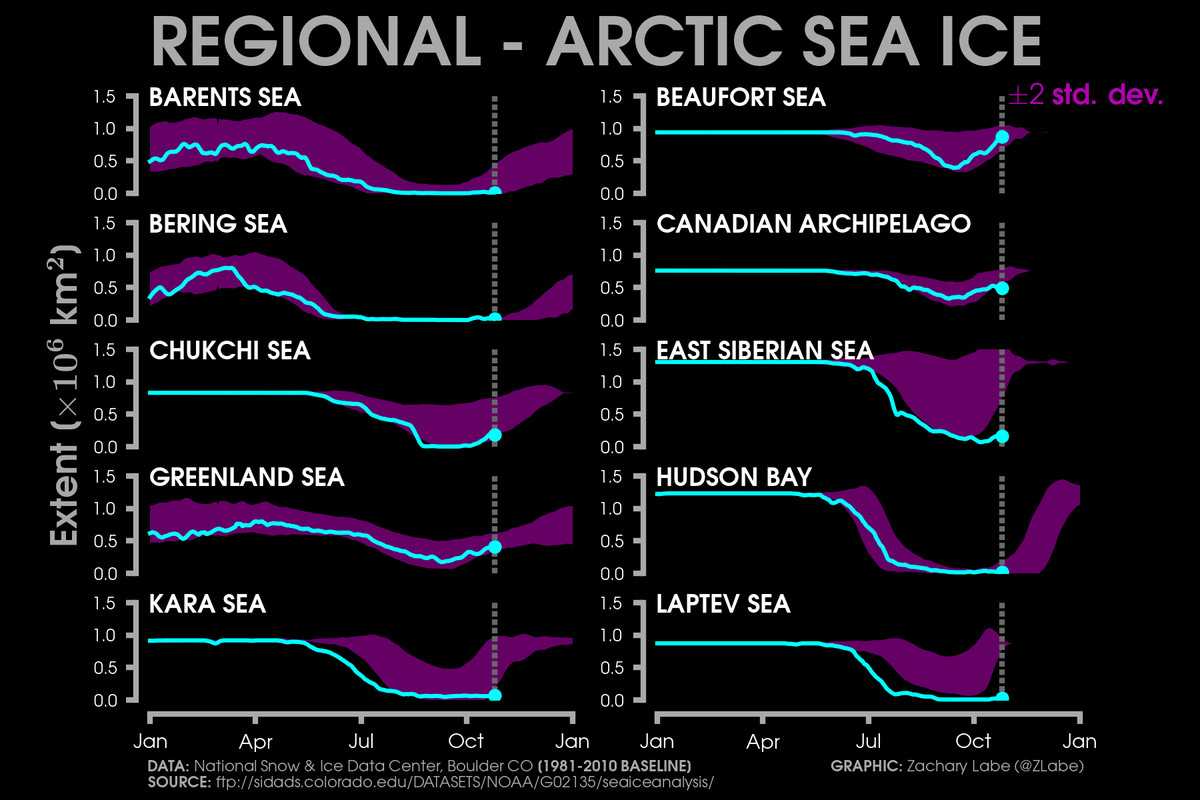 The consequences of an increasingly iceless Arctic Ocean

This October’s low sea ice extent might hold the record for a period, but climate scientists expect it will be surpassed in the years to come.

“We can expect to see substantial year-to-year variability, but overall the ice cover is becoming smaller and thinner during the fall months,” Labe said. “While 2020 is currently a record low, it may resemble a typical October in the not too distant future.” The Arctic Ocean is even projected to be ice-free in the summer as soon as 2050.

The decrease in ice has already affected indigenous people who use the sea ice to hunt for whales and seals. This has contributed to increasing food insecurity — in 2014, a Washington food bank supplied 10,000 pounds of halibut to indigenous communities in Alaska when the walrus hunt came up short, Ed Struzik reported for Yale Environment 360.

It also spells peril for polar bears, which also use the ice to hunt for food. A recent study in Nature Climate Change projects that polar bears will be nearly extinct by the end of the century due to the loss of habitat.

Changes in the ice are part of a larger “cascade effect,” as Webster describes it, in which delayed winter ice growth leads to thinner ice, which melts more easily in the summer months compared to older, thicker sea ice. This creates more open ocean.

This transformation contributes to both regional and global warming. Where a white sea ice surface would have reflected sunlight, the dark water absorbs heat, which further reduces ice growth. This change in albedo (or reflectivity) on sea and land in the Arctic is one of the main reasons the region is heating at twice the global average rate, according to the National Oceanic and Atmospheric Administration’s 2019 Arctic Report Card. According to the recent Nature Communications study, it will also be a significant contributor to global warming.

Near Greenland — which holds a massive ice sheet — the warming loop set off by sea ice loss has a minor effect on its warming, but not a substantial effect on the ice sheet itself, researchers found in a 2019 study in Geophysical Research Letters.

For now, the plummeting sea ice volumes are a startling reminder of just how rapidly the planet is changing, and how dire the consequences of delaying radical cuts in greenhouse gas emissions will be.

Millions turn to Vox each month to understand what’s happening in the news, from the coronavirus crisis to a racial reckoning to what is, quite possibly, the most consequential presidential election of our lifetimes. Our mission has never been more vital than it is in this moment: to empower you through understanding. But our distinctive brand of explanatory journalism takes resources. Even when the economy and the news advertising market recovers, your support will be a critical part of sustaining our resource-intensive work. If you have already contributed, thank you. If you haven’t, please consider helping everyone make sense of an increasingly chaotic world: Contribute today from as little as $3.