Are Burrow couches as good as they say they are? We found out

There’s a lot of pressure when it comes to picking the right couch for your space. With so many different fabrics, colors, brands and retailers to choose from, and so many other details to consider — cost, comfort, shape, size, how it holds up to pets and stains — it can be understandably overwhelming.

Like any major piece of furniture, it can vastly improve the look of your home if it’s great or make everything look a bit awkward if it doesn’t fit in just right. One brand that’s made strides as an innovative couch company is Burrow, which is all about creating couches and other furniture and decor — storage, tables, rugs, throws, pillows and more — that ship to your door in boxes (for free!) and tick everything on your list. 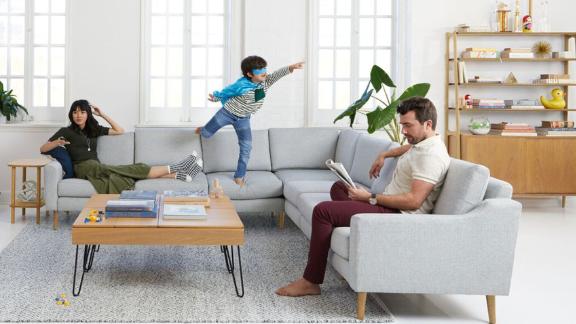 Burrow’s couches come in various sizes and shapes so it’s easy to find one that can work in your space. According to the company, they’re also stain-resistant and even allegedly petproof. So naturally, we had to give one a shot. Ahead, we put a Burrow couch to the test to see what all the fuss is about.

Burrow feels like a furniture company from the future. It doesn’t ship its couches — no matter how large — in one enormous box, but instead in several far more normal-size ones that aren’t hundreds of pounds each. Its instructions are meant to be intuitive and require very little mental strain, and its furniture is supposed to continue looking great for a very, very long time.

The material that its couches are made of is said to hold up against stains and even pets — cat scratches and all the accidents that having a puppy around may bring. Burrow boasts about “spilling red wine and spaghetti sauce” on the furniture and testing the fabric’s scratchproofness with a “custom 3D-printed animal claw.” 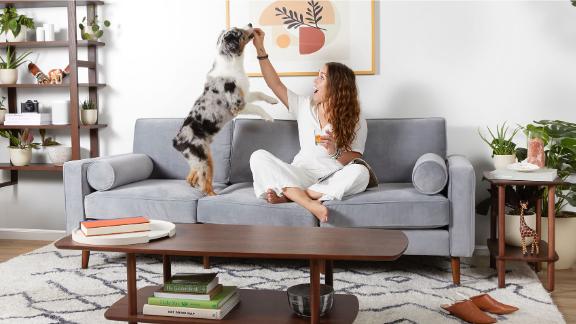 All Burrow pieces are said to be durable in terms of weight and regular wear and tear too, like multiple people of various weights sitting on it for a period of time. “We test sturdiness by dropping a 300-pound weight on it thousands of times,” the site claims.

The couches are entirely customizable, meaning you can pick everything from the pillows, to the shape of the arms, to the fabric (faux leather, woven fabric and even velvet), to the color and finish of the legs (wood or metal). Oh, and there’s even a phone charger in each of the sofas. Clearly it’s a company that takes what it makes seriously, but what’s it like to build a Burrow couch and then live with it?

Unboxing and building a Burrow couch

I’ve put together lots of hellacious pieces of furniture in my life. The kind that take an entire weekend, the kind that are shipped with the wrong tools, the kind that are sent with too few screws and bolts, which forces you to either go to a hardware store yourself or have a half-assembled piece of furniture in your home for a week until the right items are shipped to you. And if you live in a city, there’s the additional nightmare of receiving a box tremendously large and heavy that you then have to lug up or down a flight of stairs or two — and somehow shove into the tiny door of your apartment. When receiving the biggest piece of furniture in my apartment to date, I was prepared to clear the weekend for what may have been a baffling and frustrating experience.

But that’s not what happened at all. First of all, the couch I received — the Slope Nomad Sofa Sectional, which comes with a chaise lounge on one side, in crushed gravel fabric — was shipped in six boxes, all sized so I alone could physically maneuver them down a flight of stairs and into my door. (And I’m just 5 feet tall and haven’t worked out properly in months.) 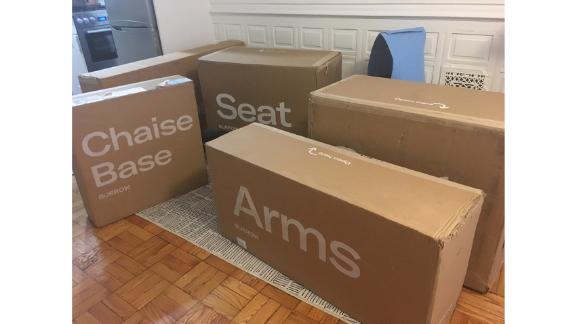 Each of the seats came in its own box, and you just flipped them open to reveal the attached backs. There was a box for the separate ottoman that makes the chaise, which can be moved to whatever side of the couch you please, a box for the arms and a box for the cushions. None were too bulky or awkward to slide around my apartment, and since each piece was encased in a piece of plastic, it was easy to get each of the pieces out of the boxes, which was a relief. I also thought it was sweet that the boxes were labeled so you knew the best order in which to open each of them as you assembled the couch. 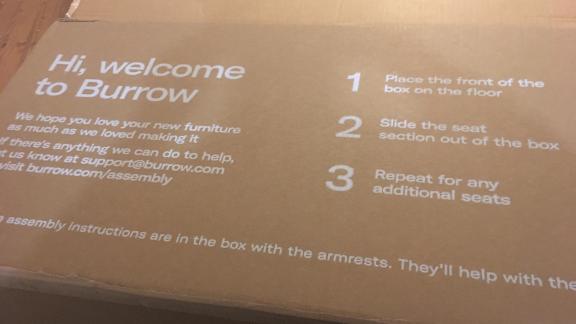 The instructions on the Burrow box
PHOTO: Rachel Lubitz 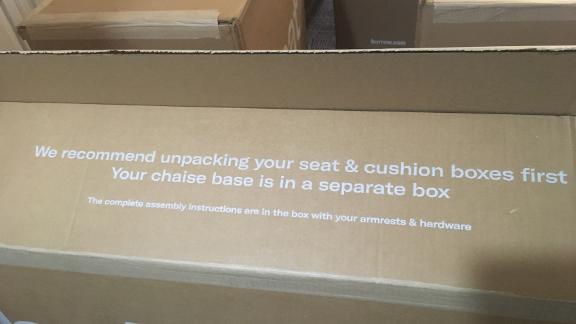 One of the boxes for the Burrow couch
PHOTO: Rachel Lubitz

Then on to the extremely easy-to-read instructions that lead you step by step in a book that was no more than 12 pages with lots of pictures. 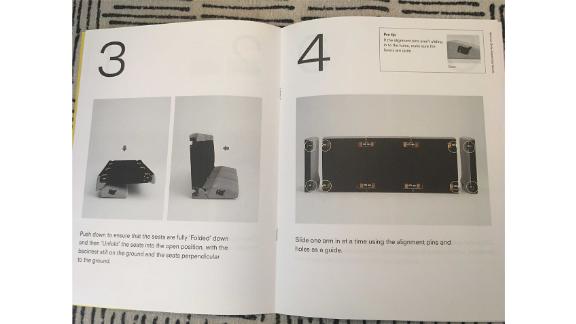 The instructions to put together the Burrow couch
PHOTO: Rachel Lubitz

You don’t need a single tool — just your hands — to slide and click the seats of the couch together, pull down latches and screw in things like legs. I successfully put it together alone in under an hour, no sweat.

How it holds up

I have to admit I was skeptical about the catproof thing. Surely it couldn’t hold up to my cat, a 2-year-old feline named Eartha who still scurries around my apartment like a kitten with an intent to destroy everything in her path — and especially anything covered in fabric that I would like to look nice. But four months in, it remarkably has.

Eartha has dug her claws into every square foot of this couch every day for the past four months and all you can see as a result is some very minor fuzziness on one of the arms. A co-worker had a similar experience with a Burrow loveseat she’s had for more than two years now, and with two cats to boot. She’s just seen some fuzziness in the areas her kitties most love to dig their claws into. We’d recommend the marbled gray color that we both have, which camouflages any damage nicely. Really, you would never, ever notice it if I didn’t point it out to you. 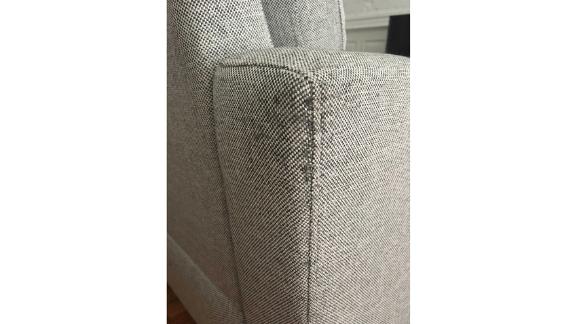 The extent of the cat damage to the Burrow couch
PHOTO: Rachel Lubitz

Then there’s the stain resistance of the fabric, which I absolutely love. I have spilled coffee, tea, soda, marinara sauce, alfredo sauce, vodka sauce (I eat a lot of pasta), all kinds and colors of hot sauce and even chili-infused olive oil on this couch. I’ve had a 10-month-old puppy happily track in dirt and also drool all over it. With a few swipes of either a wet cloth or some generic stain remover, it all came out within minutes. I’ve even used one of those stain-removing pens — yes, even if they have bleach — and stains have lifted in seconds.

As for regular wear and tear, after months I haven’t seen any dips in the form of the couch or noticed any creaking or really change at all after sitting on it for hours on end watching Netflix, napping on it and even having a friend sleep on it for a few nights. It still looks exactly as it did on the first day I unboxed it, and feels just as comfortable.

For further proof, this is the couch on the first day I received it: 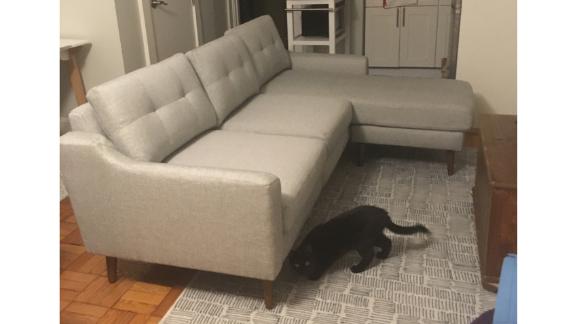 The Burrow couch when I first received it
PHOTO: Rachel Lubitz

And this is the couch now: 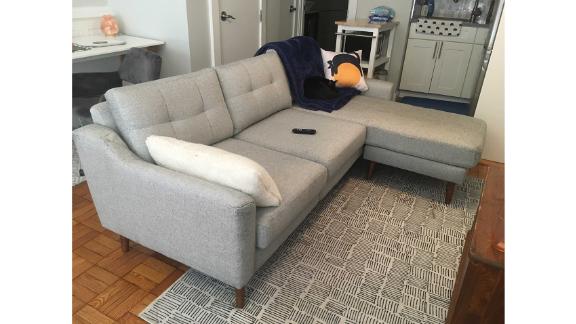 My Burrow couch after four months of use
PHOTO: Rachel Lubitz

A note, however, is that the couches we’ve had personal experience with were both in Burrow’s woven fabric. Insofar as the faux leather option, we would venture to guess it isn’t as durable in the face of pets, but according to a close friend with one, it’s just as easy to clean. We also haven’t had experience with Burrow’s velvet fabric yet since it was released after we tested.

All in all, this is a couch I expect to have for years, and easily the best couch I’ve ever owned. It’s durable, remains surprisingly petproof and is versatile enough that I know it’ll fit in with many apartments to come. If you’re looking for a quality, customizable couch that’s easy to assemble and that you’ll have for more than just one home, this is it.