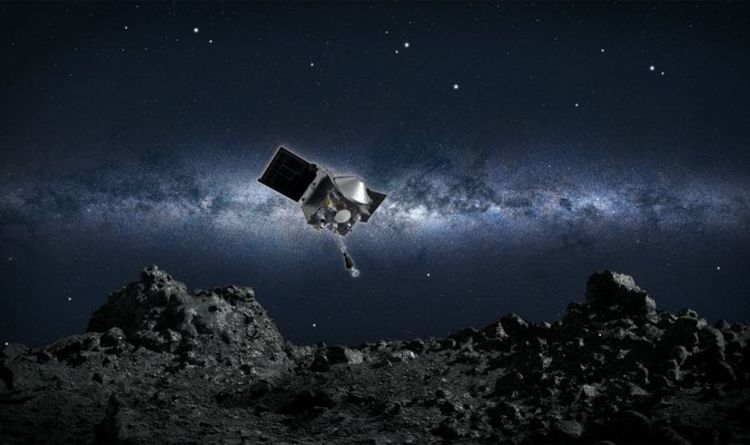 NASA’s OSIRIS-REx spacecraft has been studying the asteroid Bennu since 2016 and has made some startling discoveries. The most recent finding on the gigantic 492-metre asteroid is evidence of an ancient river.

Scientists have found carbon-bearing, organic material is widespread on the asteroid’s surface.

On Earth, a similar process occurs through millions of years of flowing rivers.

What this suggests is Bennu was once part of a larger body, most likely a planet, where flowing water was in abundance.

NASA is set to collect samples from Bennu this month, which will be returned to Earth in 2023, and the space agency will analyse the evidence to see if there are any organic compounds – a sign of life.

Dante Lauretta, OSIRIS-REx principal investigator at the University of Arizona in Tucson, said: “The abundance of carbon-bearing material is a major scientific triumph for the mission.

“We are now optimistic that we will collect and return a sample with organic material – a central goal of the OSIRIS-REx mission.”

By analysing images from OSIRIS-REx’s visible and infrared spectrometer, scientists discovered “veins of carbonate” on the surface of Bennu.

The research, published in the journal Science, said: “If the veins on Bennu are carbonates, fluid flow and hydrothermal deposition on Bennu’s parent body would have occurred on kilometre scales for thousands to millions of years.”