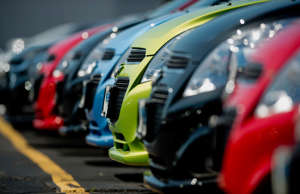 The U.S. auto industry’s streak of strong sales is screeching to a halt.

Auto sales are expected to decline by at least 15.3% to 14.4 million vehicles in 2020 as the coronavirus wreaks havoc on the economy, according to a forecast released Wednesday by research firm IHS Markit.

In March alone, vehicle sales are expected to decline by 35.5% compared with March 2019, according to a separate forecast released Wednesday by car research site Edmunds.

Start the day smarter. Get all the news you need in your inbox each morning.

The COVID-19 pandemic poses the biggest threat to the auto industry since the Great Recession, which helped plunge General Motors and Chrysler into bankruptcy.

In the years following the financial crisis, the auto industry got back on its feet as sales hit record levels, soaring from a low of 10.4 million in 2009 to more than 17 million from 2015 through 2019.

Related: Why most auto dealers are open for business during coronavirus

Globally, auto sales are expected to fall by more than 12% in 2020 to 78.8 million vehicles, according to the forecast conducted by Colin Couchman, executive director of global autos demand forecasting for IHS Markit.

That would top the 8% peak-to-trough decline during the Great Recession.

In the U.S., automakers are doling out aggressive incentives to try to keep sales humming, with some offering to make several months of payments for new car buyers. Others are offering long-term 0% loans.

Most dealers are also keeping their doors open for now, saying they provide an essential service for people who still need vehicles to get around. Some have been forced to shut down showrooms while keeping their service departments open.