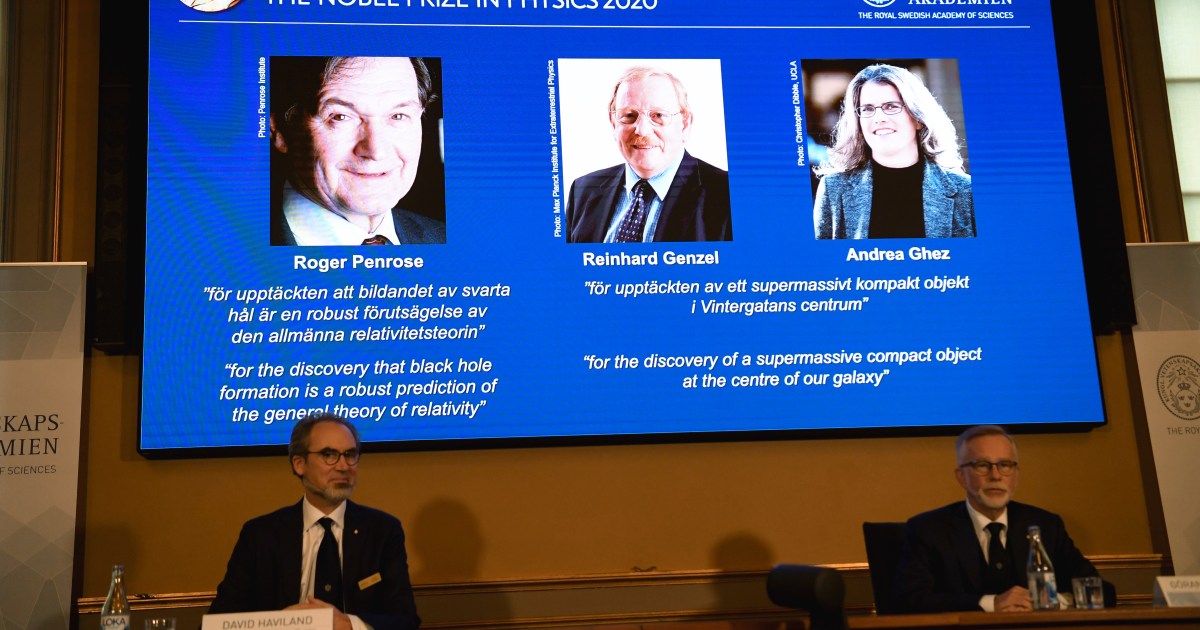 The trio won the 2020 Nobel Prize for physics for their discoveries about one of the most exotic phenomena in the universe, the black hole, the award-giving body said [EPA]

Three physicists have won this year’s Nobel Prize for physics for discoveries related to black holes.

Briton Roger Penrose, a professor at the University of Oxford, will receive half of this year’s prize “for the discovery that black hole formation is a robust prediction of the general theory of relativity”.

It is common for several scientists who worked in related fields to share the prize.

“The discoveries of this year’s Laureates have broken new ground in the study of compact and supermassive objects,” said David Haviland, chair of the Nobel Committee for Physics.

Last year’s prize went to Canadian-born cosmologist James Peebles for theoretical work about the early moments after the Big Bang, and Swiss astronomers Michel Mayor and Didier Queloz for discovering a planet outside our solar system.

The prestigious award comes with a gold medal and prize money of 10 million Swedish kronor ($1.12m), courtesy of a bequest left 124 years ago by the prize’s creator, Swedish inventor Alfred Nobel. The amount was increased recently to adjust for inflation.

On Monday, the Nobel Committee awarded the prize for physiology and medicine to Americans Harvey J Alter and Charles M Rice and British-born scientist Michael Houghton for discovering the liver-ravaging Hepatitis C virus.

The other prizes are for outstanding work in the fields of chemistry, literature, peace and economics.