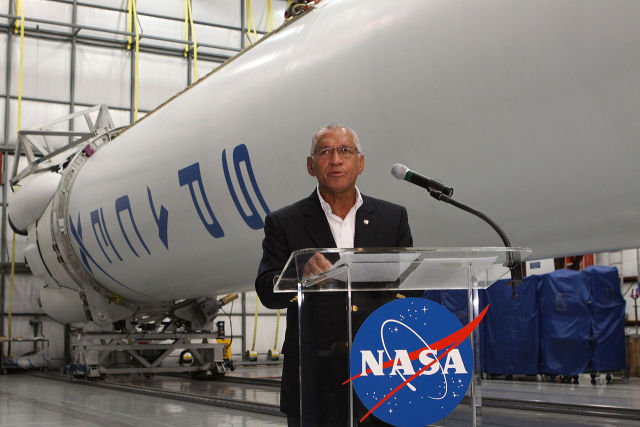 125 with 91 posters participating, including story author

Charlie Bolden, a four-time astronaut, served as NASA administrator from mid-2009 through early 2017. During that time, he oversaw the creation and initial development of the agency’s large Space Launch System rocket.

Although some NASA officials such as then-Deputy Director Lori Garver were wary of the rocket’s costs—about $20 billion has now been poured into development of a launch vehicle based on existing technology—Bolden remained a defender of the large rocket, calling it a lynchpin of the agency’s plans to send humans beyond low-Earth orbit, perhaps to the Moon or Mars. He also dismissed the efforts of commercial space companies like SpaceX to build comparable technology.

When I sat down with Bolden for an interview in 2014 at Johnson Space Center, I asked why NASA was investing so much in the SLS rocket when SpaceX was using its own funds to develop the lower-cost Falcon Heavy rocket. His response at the time: “Let’s be very honest. We don’t have a commercially available heavy-lift vehicle. The Falcon 9 Heavy may some day come about. It’s on the drawing board right now. SLS is real.”

Since that time, a lot has changed. In February, 2018, SpaceX launched the Falcon Heavy rocket for the first time. It has since flown successfully two more times, and it will play a role in NASA’s future exploration plans. Meanwhile, the SLS rocket, originally due to launch in 2017, is now delayed until at least the end of 2021.

As a result of this, Bolden appears to have changed his mind. In an interview with Politico published Friday morning in the publication’s Space newsletter, Bolden was asked what might happen during the next four years.

“SLS will go away,” he said. “It could go away during a Biden administration or a next Trump administration… because at some point commercial entities are going to catch up. They are really going to build a heavy lift launch vehicle sort of like SLS that they will be able to fly for a much cheaper price than NASA can do SLS. That’s just the way it works.”

Bolden remains a popular and influential voice in the space community, but he no longer has a direct say in US space policy. Perhaps because he no longer has to answer to Congress for NASA budgets, he is also free to speak his mind. In any case, his comments reflect the general sentiment in the space community—at least outside of the traditional contractors like Boeing and Northrop Grumman who directly benefit from SLS development—that the SLS rocket will eventually go away.

View of SLS outside the bubble

The Falcon Heavy is not as capable as the SLS rocket, but its success has clearly demonstrated that private companies can build large, powerful rockets. Moreover, it’s not just SpaceX, but also Blue Origin with its New Glenn booster, that seeks to build heavy lift rockets with private money. And although they are rivals, SpaceX’s Elon Musk and Blue Origin’s Jeff Bezos both agree that rockets need to be capable of reuse to be viable. The SLS will cost about $2 billion to launch and then fall into the ocean.

If you’re wondering what commercial space proponents really think about the SLS rocket due to its cost and expendability, it’s this, which comes from a senior official at a new space company:

“If Santa Claus arrived, and said, ‘I have good news. It now works and you can launch tomorrow. Everything’s done. You’re going to have a launch tomorrow.’ … It still isn’t getting us to the Moon. Even if they achieve everything they aim for, it still does not get people to the Moon. It certainly does not get a base on the Moon and absolutely doesn’t get humans to Mars.”

When Congress conceived of the Space Launch System rocket in 2010 and directed NASA to build it, they were making two bets. First, they bet the new space companies such as SpaceX would fail. This was a reasonable bet back then, as SpaceX had lost most of the rockets it had tried to launch into space. Second, they bet that traditional companies like Boeing would be better at building big rockets.

The Congressional lawmakers who created SLS—it began with Florida Senator Bill Nelson and Texas Senator Kay Bailey Hutchison, and they were soon joined by Alabama Senator Richard Shelby—lost both of those bets. So now, NASA is building a large, expendable rocket that has cost taxpayers tens of billions of dollars. Congress remains as committed as ever, both in budgets and public statements of support. However, the more that new rockets fly, the more difficult this support will be to maintain.

Ironically, NASA and the SLS prime contractor Boeing are no longer competing with the Falcon Heavy. SpaceX beat them 2.5 years ago. Rather, NASA is competing with SpaceX’s next rocket, the Super Heavy booster that will loft Starship into orbit. SpaceX has not even built a single segment of its Super Heavy rocket—which is larger than SLS, more powerful, vastly cheaper, and reusable—but it’s possible that the vehicle makes an orbital launch before the decade-old SLS in 2021.