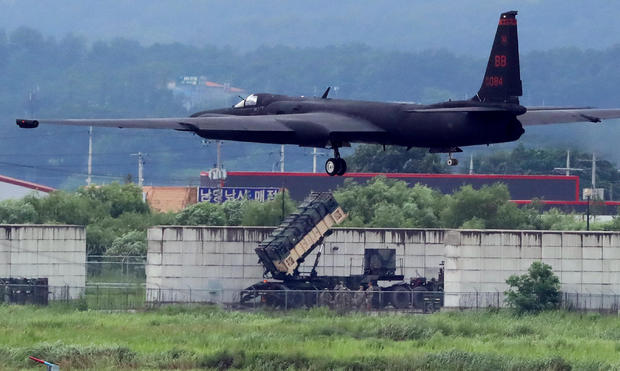 A U.S. Air Force U-2 Dragon Lady takes part in a drill at Osan Air Base in Pyeongtaek, South Korea, August 21, 2017. Lee Sang-hak/Yonhap via STRINGER / REUTERS

Beijing — China verbally protested the alleged incursion of a U.S. Air Force U-2 spy plane into a no-fly zone imposed during live-fire military exercises in the country’s north on Wednesday. Beijing test fired two missiles as an apparent warning to the U.S. military in response, including one described by the South China Morning Post newspaper as an “aircraft carrier-killer.”

In a statement issued late Tuesday, the Ministry of National Defense said the alleged U-2 flight had “seriously interfered in normal exercise activities” and “severely incurred the risk of misjudgement and even of bringing about an unintended air-sea incident.”

“This was a naked act of provocation,” the ministry said, quoting spokesperson Wu Qian. China has lodged a stern protest and demanded the U.S. cease such actions, Wu said.

The statement did not give details on the time and place of the drills, but the information matched exercises the Maritime Safety Administration said started Monday and would run through Sept. 30 over the Bohai Gulf east of Beijing.

Chinese officials did not mention the test firing of two missiles on Wednesday, but a U.S. defense official confirmed to CBS News national security correspondent David Martin the report by the Hong Kong-based South China Morning Post that the two ballistic missiles had been launched.

The newspaper said one of the missiles was a DF-21d, which it said has been described by Chinese state media as the “world’s first anti-ship ballistic missile.” Both of the missiles landed in the sea in an area designated by China for the ongoing military exercises, according to the paper.

Relations between the U.S. and China have sunk to their lowest in decades amid disputes over myriad issues including trade, technology, Taiwan and the South China Sea.

The high-altitude U-2 reconnaissance planes were flown over China, the former Soviet Union and other countries in the Communist bloc during the Cold War and upgraded versions continue to support U.S. missions.

China is also holding naval drills in the South China Sea, which it claims virtually in its entirety but over which five other governments also exercise claims. China objects to all U.S. military activity in and over the strategic waterway, especially “freedom of navigation operations” during which U.S. Navy ships sail near to Chinese-held islands.

Another naval exercise is planned from Thursday to Sunday in the East China Sea despite warnings issued over Typhoon Bavi, which is affecting the Korean Peninsula.

China claims Taiwan is its territory and threatens to use military force to bring under its control the island that is a self-governing democracy and close U.S. ally.

The eastern command of the People’s Liberation Army will “stay on high alert and take all necessary measures to fight against provocations and protect national sovereignty and territorial integrity,” the ministry quoted command spokesperson, Senior Col. Zhang Chunhui, as saying.