Taiwanese President Tsai Ing-wen said Saturday that the island democracy is strengthening its defenses against a potential Chinese invasion, but also called for “meaningful dialogue” with Beijing, which claims the country as its own territory.

Tsai—leader of the pro-independence, liberal Democratic Progressive Party and re-elected for a second term in January—took a soft, conciliatory tone in her speech to mark Taiwan’s National Day. The address came after a month of Chinese military exercises in the Taiwan Strait, which separates the two countries.

But Chinese state-backed media was dismissive of Tsai’s appeal to diplomacy, with the nationalistic Global Times newspaper leading the criticism. The newspaper said Tsai had tried to “fool” the world with her speech, and declared that the risk of war has risen “sharply” in recent months.

The Chinese Communist Party claims ownership of Taiwan under its “One China” policy, and has vowed to take control of the island by force if diplomatic means fail. Taiwan—officially called the Republic of China—has been independent since the end of the Chinese Civil War as the last bastion of the defeated nationalist forces.

Tsai said Saturday that her government “will not act rashly” and is “committed to upholding cross-Straits stability.”

She said she is “willing to work together to facilitate meaningful dialogue” with Beijing, despite recent tensions over the coronavirus pandemic, China’s suppression of pro-democracy activists in Hong Kong, its oppression of minority Muslim groups in Xinjiang, and ongoing military drills in the Taiwan Strait.

But Global Times—owned by the People’s Daily newspaper, which is the official publication of the CCP—said the regional situation “has been seriously deteriorating” in an editorial published Sunday.

Global Times accused Tsai of “utilizing the idea of facilitating dialogue as an ‘olive branch’ as a delaying tactic, attempting to deceive the international community for sympathy,” and dismissed her administration as “a gaggle of opportunistic politicians.”

The newspaper, often used to air the more belligerent sentiment from within the CCP, lauded China’s recent military exercises in the area “as a clear warning against moves from forces which seek ‘secession,'” a reference to the pro-independence movement in Taiwan.

Global Times also published footage of a recent People’s Liberation Army amphibious landing drill in the Taiwan Strait, describing the exercise as evidence of “the mainland’s strong capability and firm will against Taiwan secessionists and push for reunification.”

“The exercises featured concentrated deployments of unmanned aerial, surface and ground vehicles, which will significantly boost the PLA’s efficiency in seizing the control of an island,” the report added.

“The Chinese mainland has clearly gained the upper hand,” the newspaper’s editorial read. “It is making full combat-level preparations for possible military conflict to strike Taiwan secessionist forces. It is not just a bluff.”

The U.S. has an implicit commitment to help defend Taiwan against Chinese invasion per the 1979 Taiwan Relations Act. Washington does not officially recognize Taiwan, but has long supported the island’s independence through arms sales, much to Beijing’s annoyance.

National Security Advisor Robert O’Brien said last week that the Taiwanese should “turn themselves into a porcupine” because “lions generally don’t like to eat porcupines,” in reference to Chinese pressure.

Global Times accused Taipei of “fully coordinating with the new policy of the U.S. to contain the Chinese mainland.” It added: “Tsai authorities have turned completely hostile toward the Chinese mainland, and this issue can no longer be resolved through dialogue. The malevolent force might have to be subdued through military means.” 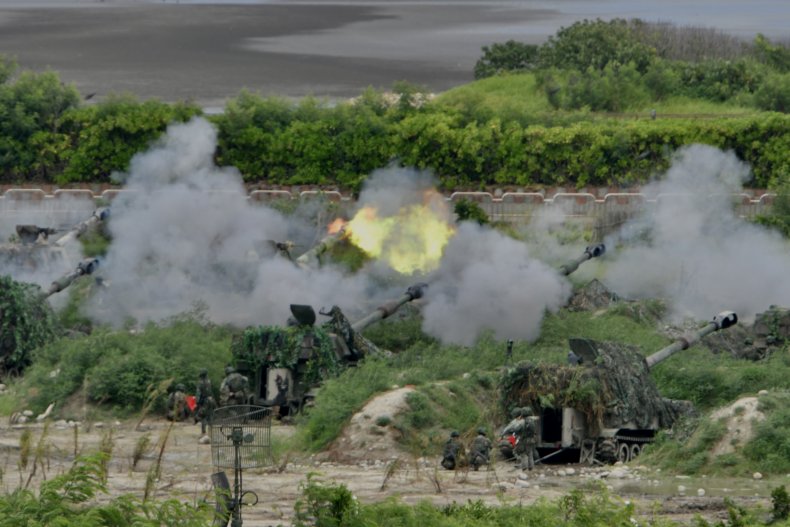