The building crumbled around 9:40 a.m. Saturday in a village in Xiangfen county in the province of Shanxi, about 400 miles (630 kilometers) southwest of Beijing, China’s Ministry of Emergency Management said in a statement.

Hundreds of rescuers searched the rubble and broken slabs of concrete, using sniffer dogs, cranes, and high-tech sensors. After daylong rescue efforts, 29 people were confirmed dead and another 28 were injured, seven of them seriously, officials said. 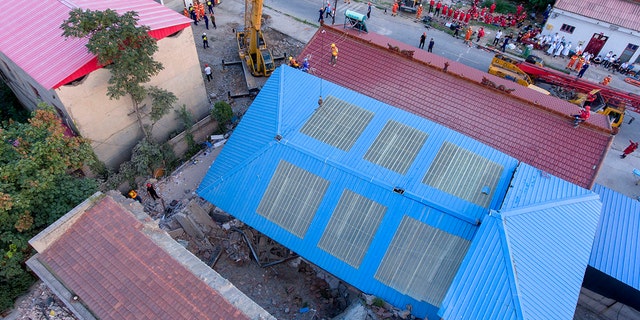 It was not immediately clear what caused the collapse.

The Shanxi provincial government appointed a team to investigate the accident, Reuters reported.

While China has seen major improvements in industrial safety, building standards are sometimes ignored, particularly in rural areas such as Xiangfen county. The region lies in the heart of China’s coal country, where thousands of miners have died in explosions, collapses, and floods over the years. 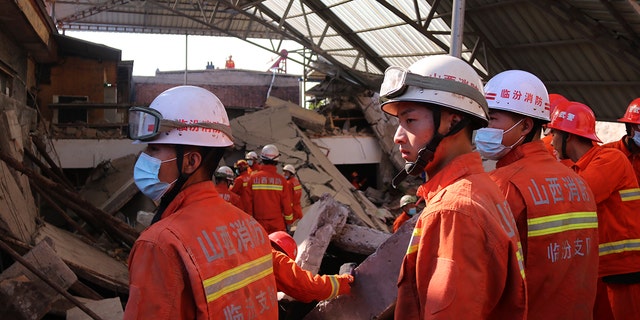 Rescuers search for victims in the aftermath of the collapse of a two-story restaurant in Xiangfen county in northern China’s Shanxi province on Saturday, Aug. 29, 2020. (Chinatopix Via AP)

Residents told Chinese media outlet The Paper that the restaurant was originally a one-story building constructed over 20 years ago with prefabricated panels, the South China Morning Post reported. The building has since undergone several additions, including a second floor and underground level.

Provincial authorities launched inspections of all public buildings on Saturday, the outlet reported, citing the China News Service. Buildings that do not meet safety requirements or found built with illegal construction would be forced to closed until the proper standards were met.