Colleges across the U.S. sent students home after outbreaks. N.J. kids just moved in. Are we next? – NJ.com

Find all of the most important pandemic education news on Educating N.J., a special resource guide created for parents, students and educators.

In the last few weeks, universities and colleges from New York to California have suspended in-person classes due to clusters of coronavirus cases among students.

On Friday, Temple University and SUNY Oneonta became the latest universities to opt to do the entire semester online following outbreaks. One of the first to do so was the University of North Carolina at Chapel Hill, which saw an outbreak a week into classes grow to infect over 1,000 students.

Meanwhile, in New Jersey, college students were welcomed back to numerous colleges and universities. Thousands of them moved into dormitories, albeit with some capacity limits and new rules.

So what is the risk that New Jersey schools could see outbreaks like those at other universities?

“There is absolutely the potential for an outbreak,” said Robert Kelchen, an associate professor of higher education at Seton Hall University who has been tracking schools’ decisions this fall.

But Kelchen said he thinks the risk is a bit lower here due to a number of factors.

“Most universities in New Jersey have most of their students fairly local and that’s an advantage because the virus transmission rates here are among the lowest in the country,” he said. “And also there aren’t as many big party schools in the state compared to elsewhere.”

Experts agree, anytime you have people living together in congregate housing like dorms, there is a greater risk of infectious disease spread. At UNC-Chapel Hill, the chancellor said the outbreak began when students engaged in off-campus activities and brought it back to residence halls, where hundreds were infected. 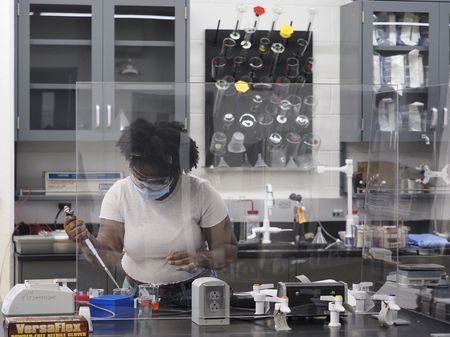 So far, no New Jersey college or university has reported any clusters of cases specifically related to on-campus housing. The most cases reported publicly are at Rowan University, where the 52 cases include 23 students who have been on-campus and 29 who haven’t been to campus.

Some schools, including Rutgers University, The College of New Jersey and Princeton University, are almost all online and seriously limiting on-campus housing. Rutgers has about 10% of students living on campus, while TCNJ has only about 50 students.

But other public and private schools invited students back to dorms, saying they are giving students what they want: as close to a traditional college learning experience as possible. There is also the reality that after the financial losses that began in the spring, they could use the room and board fees.

The Office of the Secretary of Higher Education gave schools guidance on some housing aspects, including that they must restrict use of dorm common areas, limit visitors and student gatherings, clean communal bathrooms at least twice daily and set aside rooms for students who test positive and need to isolate.

But when it came to dormitory density, the only rule from the state was that capacity could not be 100%. Several colleges and universities planned to have dorms as much as 90% full this semester, although some schools found fewer students than expected actually moved in.

“Having fewer people living in the dorms helps,” said Stephanie Silvera, an epidemiologist and professor at Montclair State University. “But these are people who are on average 18 to 22 years old, who we know are developmentally more likely to engage in risky behavior… You just need one person to go to a party and come back to the dorm.” 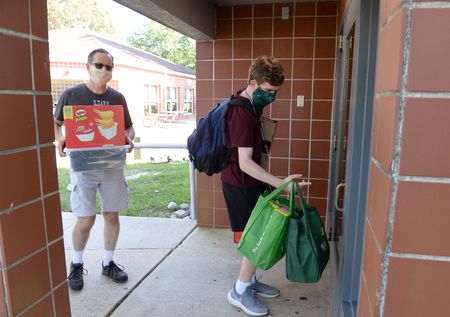 How many students are actually living on campus?

For some schools, the density cap they initially set for residence halls turned out to be moot.

Fewer students opted to live on campus at numerous institutions, something several university spokesmen attributed to the fact that many students opted to stay home when they found out most or all of their classes would be online. It’s also possible they were just nervous about communal living in the time of COVID-19.

Of the state’s public universities, Rowan University will have the most students on its Glassboro campus with about 5,000 students, most of whom will have a roommate. The university aimed for 80% and ended up with 63% occupancy.

At Montclair State University, capacity in dorms was capped at 67% but only 3,200 beds, or 62%, were filled. Most students have singles, but doubles were granted upon request. Kean University, which limited the number of beds by half to 1,186 beds, also gave everyone single rooms.

Stockton University and New Jersey Institute of Technology both planned for 85% capacity, but ended up with 64% and 68% respectively. That means roughly 2,200 students on Stockton’s two campuses and 1,300 students at NJIT.

Other schools saw even fewer students than expected choosing on-campus housing. Seton Hall capped capacity at 88% but ended up assigning only 1,420, or about half its beds. William Paterson University also filled only half its beds, about 1,200, though it planned for 70% capacity. Fairleigh Dickinson University’s two campuses originally planned for 73% capacity but filled just 600 of its 2,712 beds, or 22%.

Rutgers University typically hosts about 19,000 students on its campuses, but this year only 1,875 will live on campus — most of whom are graduate, international or out-of-state students and those who are housing and food insecure. 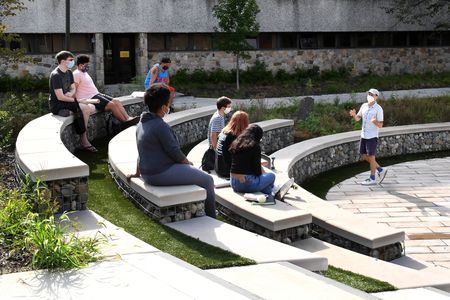 Every college and university in the state had to submit a plan to the Office of the Secretary of Higher Education detailing its reopening strategy, from requiring mask-wearing to ensuring dining halls are socially-distant.

Many of the plans have similar elements, like bans on guests and gatherings and requirements for online health screenings and participating in contact tracing.

But the state left much of the specifics up to the schools, so it’s not surprising that their plans for how they will bring students back and mitigate risk vary greatly.

Take testing, for example. Kean University will have regular testing of all students on campus. NJIT has a wastewater testing protocol, which aims to identify cases in residence halls before the virus can spread much.

Rowan University’s reopening plan says frequent, universal testing is “not based in science and not feasible in terms of available resources” so it will test symptomatic students and their close contacts, and implement random voluntary testing.

Joe Cardona, a spokesman for Rowan University, said that the university’s housing plan was carefully crafted with a focus on giving students the best experience.

“We felt that we could do it safely, as safe as can be in the situation, so we said let’s move forward,” he said. “We have experts who analyzed the data that’s coming out, whether it’s international organizations and local health providers in the state, and we decided this is what’s right for us.” 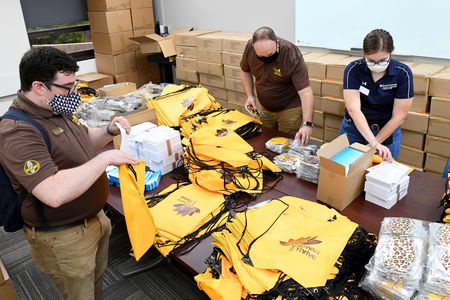 Rowan University staff assemble “wellness kits,” including thermometers and masks, that were given to students living on campus.Courtesy Rowan University

Some schools appointed committees to advise on the plans, often including a range of deans, administrators and health experts. Schools say they were focused on students’ experience and educational needs, but critics have questioned how much the financial crunch is driving decision making.

Richard Wolfson, an education professor at Montclair State and president of AFT Local 1904, said he thinks university officials were more focused on money than science.

He also said it is concerning that Silvera, the only faculty member on the university’s reopening advisory committee with expertise in epidemiology, resigned from the body because she felt her input wasn’t being taken seriously.

Montclair State spokesman Joe Brennan said the decision to have students in dorms “was made for educational reasons, not financial reasons.”

“Many of our students perform better when they are on campus,” he said. “At home they may not have up-to-date technology, reliable internet access, or a quiet, private place for studying. On campus, they have the educational and social support structures they need to succeed.”

Finances are a “contributing factor” for schools deciding whether to bring students back to live on campus, Kelchen said.

“Colleges lost billions of dollars when they had to send students home in March and it would be a struggle to afford to do so again,” he said.

At the same time, having dorms filled to half or two-thirds capacity is not a slam dunk financially. In normal years, most institutions’ budgets are built around occupancy rates of 90% or higher “to maintain fiscal viability,” according to the Association of College and University Housing Officers.

The state didn’t dictate much about housing density to colleges, beyond saying dorms couldn’t be full and that schools should try to maximize the number of single rooms. Nicole Kirgan, a spokeswoman for the Office of the Secretary of Higher Education, said stakeholders and the office’s Higher Education Restart Advisory Group requested a “flexible restart framework.”

“We also recognize that on-campus residential housing is very different from campus to campus, but prioritizing student health and safety across institutions remains our goal,” she said.

The office consulted with state and federal health experts about congregate housing situations, she said. The CDC has issued guidance for higher education but also didn’t specify how full is too full for dorms.

The state’s residents will see soon enough if the plans at these institutions are sufficient to prevent serious outbreaks in residence halls.

Kelchen said he believes most students are being responsible and careful, but a quick outbreak of 100 or so cases could spur institutions — or the governor — to rethink plans for students on campus.

“The question is, can colleges bring that back under control without it getting into the broader community,” he said.

Our journalism needs your support. Please subscribe today to NJ.com.

Rebecca Everett may be reached at reverett@njadvancemedia.com. Tell us your coronavirus story or send a tip here.