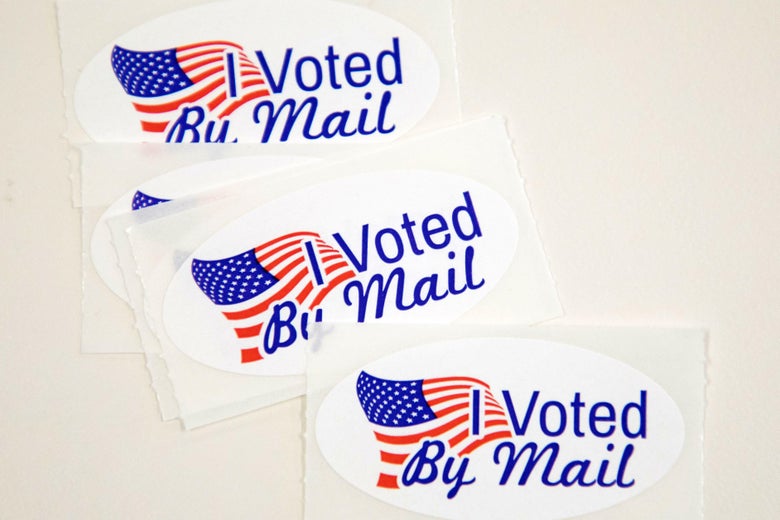 Stickers that read “I Voted By Mail” sit on a table waiting to be stuffed into envelopes by absentee ballot election workers at the Mecklenburg County Board of Elections office in Charlotte, NC on September 4, 2020. LOGAN CYRUS/Getty Images

Colorado Secretary of State Jena Griswold accused the United States Postal Service of misleading American voters and decided to do something about it. Griswold said on Saturday that she filed a lawsuit against the Postal Service, hours after she accused it of sending information that could be “confusing” to voters. Griswold says in the lawsuit that the USPS has sent out information to Colorado voters that include “false statements.” The state also filed a temporary restraining order against the Postal Service to block it from mailing any more of the postcards to homes in the state.

51 days until the election. Just filed a lawsuit against the @USPS for sending misinformation about mail ballots to millions of voters. Was that on your 2020 bingo card?

The Postal Service “intends to mail an official notice to all Colorado voters that provides false statements about voting in Colorado,” reads the lawsuit. “These false statements will disenfranchise Colorado voters, including its uniform military and overseas voters; mislead them about Colorado’s election procedures; infringe Colorado’s constitutional rights to conduct its elections; and interfere with the secretary of state’s ability to oversee Colorado elections.”

We also just filed a temporary restraining order against @USPS. Their postcards containing wrong election info have been sitting in a warehouse in Denver, and they refuse to not send them. So we’re asking a judge to stop them!

Griswold wrote a Twitter thread late Friday in which she accused the USPS of sending out the same postcard about absentee voting to homes across the country even though different states have different rules. “For states like Colorado where we send ballots to all voters, the information is not just confusing, it’s WRONG,” Griswold said in a tweet late Friday. “I will do everything in my power to stop @USPS from sending misinformation to voters.”

I just found out the @USPS is sending this postcard to every household and PO Box in the nation. For states like Colorado where we send ballots to all voters, the information is not just confusing, it’s WRONG. (Thread) pic.twitter.com/RoTTeJRJVl

Griswold shared a copy of the postcard on Twitter. “To protect Colorado voters and our election system, our team worked late into the night to file suit against #USPS,” Colorado Attorney General Phil Weiser wrote on Twitter. The lawsuit claims that the postcard has several pieces of incorrect information for Colorado voters. Griswold says secretaries of state from other states have reached out and are considering filing their own lawsuits.

Griswold claims that in order to avoid just this type of situation, secretaries of state had asked Postmaster General Louis DeJoy to review the postcard before it was sent out to voters but he refused. “This may have started off as a well-intentioned effort by @USPS, but their refusal to listen to election experts combined with the recent postal slowdown in some parts of the country is beyond suspect,” Weiser wrote.

The USPS pushed back against the criticism, saying the postcard is part of a broad campaign to “educate the public” about the Postal Service and mail-in ballots. “The non-partisan campaign neither encourages nor discourages mail-in voting,” a USPS spokesperson said in a statement Friday night, “rather, it is designed to reach and inform all voters about the importance of planning ahead if they plan to vote by mail.”

This is not the first time Colorado has been at odds with the USPS and marks the latest instance of concern among Democrats that Postal Service leaders are not properly preparing for what is expected to be a huge surge of mail-in ballots for November’s election. Just a few days ago, Colorado joined 13 other states filed a lawsuit calling on a judge to block the Postal Service “from implementing changes to the mail service that interfere with Americans’ daily lives and the November 2020 election.” The lawsuit claims DeJoy “violated federal law when he implemented radical changes at the Postal Service with very little notice, causing irreparable harm, including delays in delivery of time-sensitive materials from medications to legal notices to ballots.” Last month, Griswold slammed Trump’s opposition to increase funding to the postal Service, characterizing it as “voter suppression.”