China’s biggest event on the political calendar, the annual session of the National People’s Congress, is always a tightly choreographed legislative pageant aimed at conveying the strength of the ruling Communist Party.

Expect even more pomp and propaganda this year.

The event, which starts Friday morning in Beijing, is a chance for China to show the world that it has tamed the coronavirus epidemic, in the face of growing international criticism over its early mishandling of the outbreak.

It will all be wrapped in the policies and plans for the Communist Party. The leadership will lay out its agenda for the country’s biggest challenges — including the threat of higher unemployment, coronavirus outbreaks and security in Hong Kong — and the delegates will give their ceremonial stamp of approval.

Here’s what you need to know.

It’s a logistical challenge that is even more complicated. 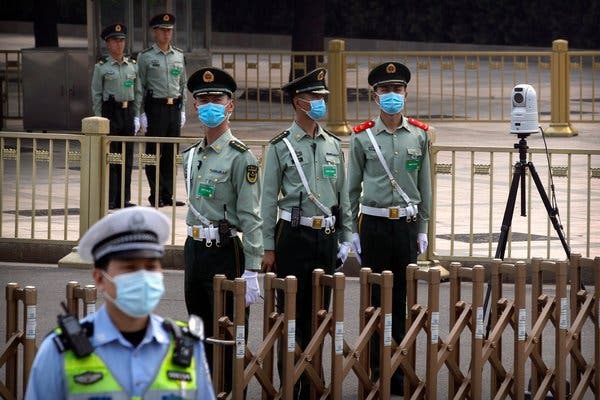 Security at Tiananmen Square in Beijing on Thursday.Credit…Pool photo by Andy Wong

The congress is a logistical nightmare even in normal times.

Traffic is snarled as about 3,000 delegates stream into Beijing, the capital. Security checks blanket the city. Every detail of the event is carefully crafted, down to how uniformed waiters serve tea to China’s leaders seated on a stage.

Now add the complexities of the coronavirus. The congress was already delayed for weeks because of the epidemic.

It will be an affair designed for the social distancing age. Delegates have been made to take nucleic acid tests for the virus before being allowed to travel to Beijing. Masks will be required, windows will be opened to improve ventilation and plastic dividers will sit atop dinner tables.

The government is preventing many journalists from attending the congress, citing safety concerns. Most interviews will be conducted by video.

The party wants to declare victory in the ‘People’s War.’

China faces growing criticism around the world for its early attempts to conceal the outbreak in Wuhan. Many governments are demanding an investigation into the origins of the virus. Relations with the United States have soured, raising the specter of a new Cold War.

At home, the party retains broad public support for curbing the spread of the outbreak, but critics have urged it to admit its early missteps and reflect on the pitfalls of its penchant for secrecy and control.

“When decisions lead to policy failure, not only should the course be corrected, those responsible must acknowledge their mistakes, appeal in all humility for public forgiveness and be held accountable,” wrote Xu Zhangrun, a law professor in Beijing who has been punished for criticizing China’s leader, Xi Jinping. “Without this as a bottom line, we will all be confronted by the worst possible kind of rulership, one under which people are forced to live as if in a foreign land.”

But such voices will not be heard inside the ornate Great Hall of the People, where the congress will take place, and where the mood will likely be positive as Chinese leaders celebrate the country’s progress in reducing infections.

The congress will provide party leaders a forum to declare victory in what Mr. Xi has described as a “people’s war” against the virus — a chance to beat back criticism from abroad and rally the public behind him.

“They want to remind people in China, ‘Just think how lucky you are that you have Xi Jinping and the Communist Party governing you,’ ” said Steve Tsang, the director of the China Institute at the School of Oriental and African Studies in London. “The message is: ‘Imagine what suffering you would have if you have Boris Johnson or Donald Trump as your leader.’

New national security laws will be considered for Hong Kong.

During the session, the congress is likely to approve a broad outline for new national security laws that would give the Communist Party more authority in Hong Kong.

The process would effectively circumvent the Hong Kong government, undercutting the relative autonomy granted to the territory under a political formula known as “one country, two systems.”

China announced its push for the new laws on Thursday. It is likely to reignite the fear and anger over the erosion of freedoms that distinguish the city from the rest of the country and led to last year’s widespread antigovernment protests.

The coronavirus outbreak has muted the protests in Hong Kong, where infections have remained low, but some expect the protests to ramp up again this summer.

The legislative push in Beijing marks the most aggressive step by the party to exert its influence over the former British colony since it was reclaimed by China in 1997. The move would likely allow Beijing to take direct aim at the protests, which posed a challenge to the party and Mr. Xi.

Reassurances will be made about the economy.

The economy will be front and center at the congress as investors look for reassurances that China’s leaders have a plan to restart growth.

With export orders stalled and a dip in retail sales raising fears of a possible second downturn this summer, many are looking to Beijing to signal that it has a plan to increase government spending to offset the slowdown.

The threat of mass unemployment is especially unnerving for the party, which has stayed in power for decades in part by delivering economic prosperity and stability.

“The massive loss of jobs is bad for all governments, but for the Chinese government it is a question of regime survival,” said Diana Fu, an associate professor of political science at the University of Toronto.

Professor Fu said that to avoid unrest as the slowdown continued, the government would need to move forward with plans to expand the social safety net.

“If college graduates, the urban middle class, and China’s 300 million migrant workers cannot find jobs quickly enough, who will they blame?” she said.

A big focus of the meeting will likely be Mr. Xi’s plans to eliminate extreme poverty in China, a politically popular proposal that the party is pushing forward, despite the outbreak. Mr. Xi is looking to declare victory in that campaign by the end of this year.

The pandemic casts a shadow over the gathering.

A convoy of buses with delegates in Beijing on Thursday.Credit…Nicolas Asfouri/Agence France-Presse — Getty Images

The pandemic will hang over the entire congress, which is expected to be about a week long, several days shorter than usual.

The coronavirus killed more than 4,000 people in China, though official figures are considered an underestimate.

On Thursday, in preparation for the meeting, Mr. Xi joined delegates to the Chinese People’s Political Consultative Conference, an advisory body to the central government, in holding a minute of silence to remember the victims of the pandemic.

Despite the crisis, many traditions will remain the same.

Delegates, who represent a variety of backgrounds, including business executives, religious leaders and celebrities, will bring proposals — though there is no guarantee that such bills will go anywhere.

A lawyer from the southwestern city of Chongqing, for example, is calling for the government to grant single women the right to freeze their eggs, a practice currently banned in China. Pro-Beijing delegates from Hong Kong will propose enacting national security laws in the semiautonomous city, which has seen large and sometimes violent antigovernment protests over the past year.

Security inside the Great Hall of the People on Thursday.Credit…Leo Ramirez/Agence France-Presse — Getty Images