Here’s what you need to know:

N.Y. Daily Death Toll Drops, But Could Be a ‘Blip,’ Cuomo Says

With coronavirus cases rising, Gov. Andrew Cuomo of New York said the state’s daily death toll saw a drop for the first time since the outbreak. But he cautioned it was unclear what the numbers indicated.

Positive cases are up 8,000, total of 122,000 cases. Number of patients discharged, total discharged is 12,000, 1,700 discharged in one day. Number of deaths is up. That’s the bad news. It’s 4,159. And we pray for each and every one of them and their families. And that is up. And that is the worst news. But, the number of deaths over the past few days has been dropping for the first time. What is the significance of that? It’s too early to tell. Interesting blip, maybe, in the data or hopeful beginning of a shift in the data and the number of cases. Total number of new hospitalizations is 574, which is obviously much lower than previous numbers. That’s partially a function of more people being discharged. By the data, we could be either very near the apex, or the apex could be a plateau and we could be on that plateau right now. We won’t know until you see the next few days. Does it go up? Does it go down? But, that’s what the statisticians will tell you today. 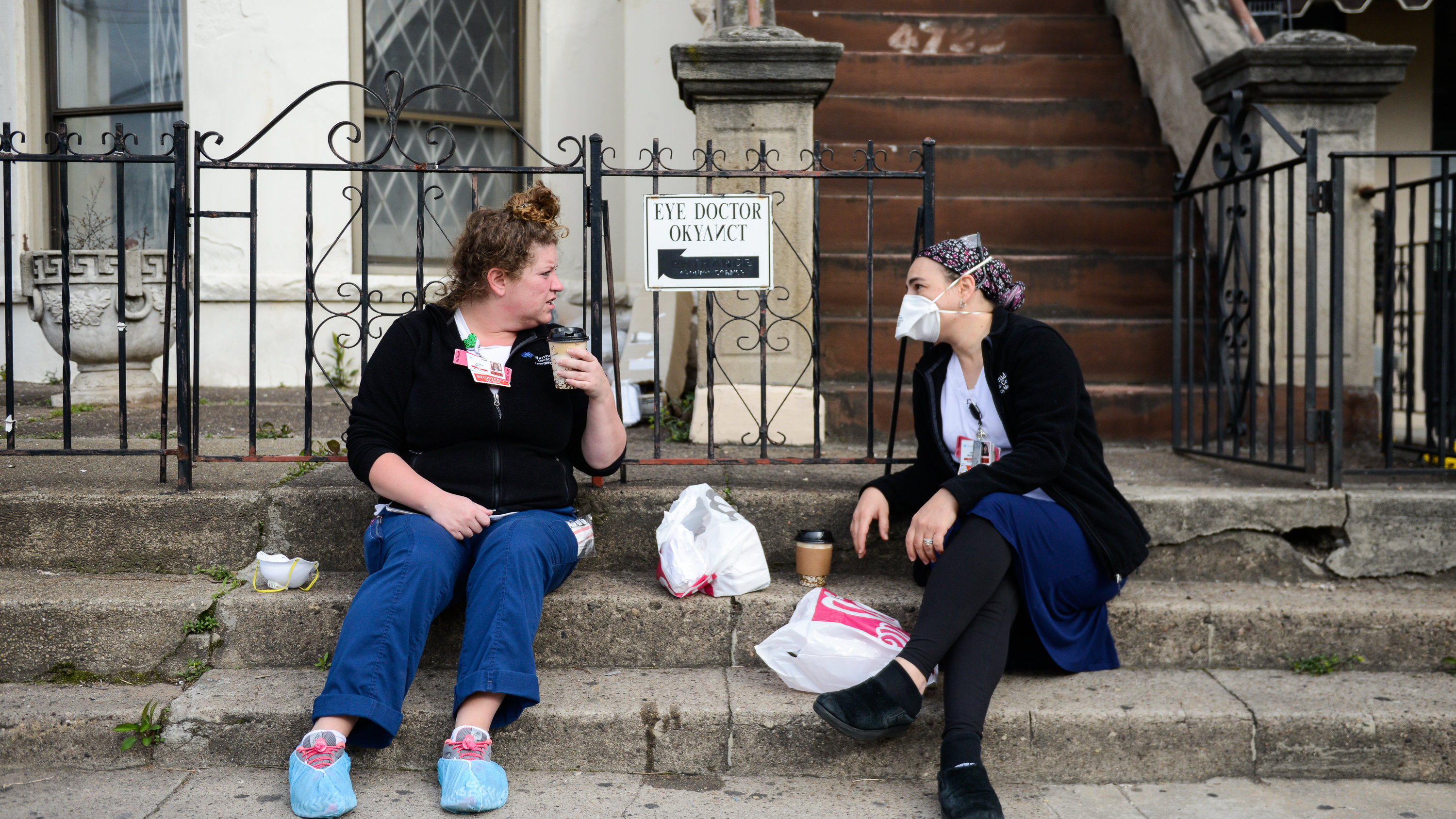 With coronavirus cases rising, Gov. Andrew Cuomo of New York said the state’s daily death toll saw a drop for the first time since the outbreak. But he cautioned it was unclear what the numbers indicated.CreditCredit…Marian Carrasquero for The New York Times

New York State has now topped 4,000 deaths from the coronavirus, Gov. Andrew M. Cuomo said on Sunday. But the governor pointed to early indications that the crisis could be plateauing, though he cautioned against jumping to any conclusions.

The number of deaths in the state has reached 4,159, Mr. Cuomo said. But, notably, there were slightly fewer fatalities on Saturday than on Friday. In addition, the number of new hospitalizations on Saturday was significantly lower than in previous days.

“You could argue that you’re seeing a slight plateauing in the data, which obviously would be good news,” Mr. Cuomo said at his daily briefing in Albany. But he noted that it was too soon to say whether the changes in the numbers were indicative of a trend.

Mr. Cuomo also said he would seek to shift patients from overloaded hospitals to other facilities with lighter workloads and more equipment.

“I can’t say to a hospital I will send you all the supplies you need, all the vents you need,” he said. “We don’t have them. You are going to have to shift and deploy to different locations based on the need of that location.”

Responding to concerns from residents in other parts of the state who were concerned that they would be left vulnerable if the state redeployed ventilators and other equipment away from their area. “I don’t see any other operational model,” he said. “You cannot handle this without your brothers and sister.”

So far, the governor said, the state has not redeployed any ventilators or equipment.

When a reporter asked about Mr. Trump saying he would like to see professional sports reopen soon, Mr. Cuomo gently disagreed. “I would love to see sports back, cope with cabin fever,” the governor said. But, he added, policymakers needed to “follow the science” and “let the professional doctors or health care professionals tell you when it’s safe to reopen and that’s when you reopen.”

Here are the latest statistics from Mr. Cuomo’s briefing: 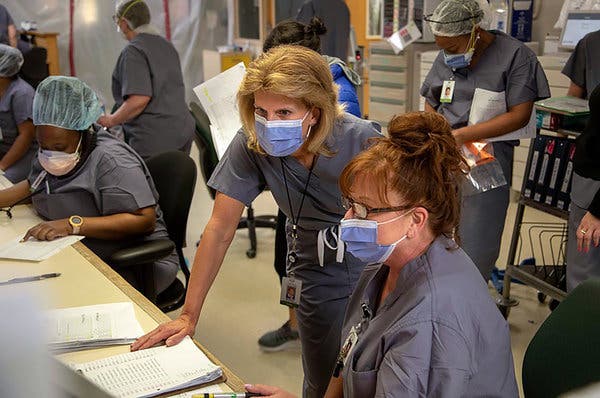 Twelve doctors at her hospital and the chief executive were sickened with the coronavirus. A colleague had died. Patients as young as 19 were being placed on ventilators.

But Michele Acito, the director of nursing at Holy Name Medical Center, in the hardest-hit town in New Jersey’s hardest-hit county, felt like she was holding up.

The disease that has crippled New York City is now enveloping New Jersey’s densely packed cities and suburbs. The state’s governor said on Friday that New Jersey was about a week behind New York, where scenes of panicked doctors have gripped the nation.

Hospitals in the state are scrambling to convert cafeterias and pediatric wings into intensive care units. Ventilators are running low. One in three nursing homes has at least one resident with the virus.

At Holy Name in Teaneck, just across the Hudson River from Manhattan, two doctors are among the 150 patients being treated for the virus.

The ages of the 41 people on ventilators one day last week ranged from 19 to 90.

One of them was Edna Acito, Ms. Acito’s mother-in-law.

The store signs of a closing New York.

All along the empty streets of Manhattan, the messages reach out from the newly darkened storefronts. The notes express empathy, resolve, concern, even humor — a reflection of New York’s spirit.

After Gov. Andrew M. Cuomo ordered all nonessential businesses in New York to close last month, many storefronts had messages for their customers. We looked at some of those voices in waiting around the city.

The 300,000 N95 masks arrived at the Jacob K. Javits Convention Center at a crucial moment, as the city experienced perhaps its worst day in the crisis, reporting 305 new deaths on Friday alone. Health workers across the city and state have complained of a shortage of crucial supplies they need to stay safe and treat patients, with some organizing protests at their hospitals.

The team had received a shipment of over 1 million face masks from China earlier in the week after the Massachusetts governor and the team’s owner teamed up to buy the supplies. The rest will go to hospitals in Massachusetts.

New York’s 1970s-era software is being overwhelmed by the thousands of newly unemployed.

Mohammed Saiful Islam got a taste of how antiquated the technology that runs New York State’s unemployment-insurance system is when he had to go to a Staples store in the middle of a pandemic to fax his pay stubs to Albany.

Mr. Islam, a Lyft driver who lives in Queens and has been idled by the outbreak, is among more than 450,000 New Yorkers who have tried, often in vain, to apply for unemployment benefits in the past three weeks.

As he and many others discovered, the state’s archaic systems were woefully unprepared for the deluge of claims. In Mr. Islam’s case, he said it took him four days to reach someone who could explain what he had to do to complete the application process.

State officials admitted as recently as last summer that there were problems with the technology used for such applications, describing New York’s unemployment-insurance systems as relics from the heyday of mainframe computers.

The software programs that run the systems were “written in the 1970s and 1980s and remain constrained by the technology of that era,” officials wrote while seeking bids as part of a planned modernization project.

In March, when hundreds of thousands of workers whose jobs had suddenly evaporated started trying to log onto the Labor Department website or call its phone lines, the systems failed.

Would-be applicants’ frustration grew as their computer screens froze repeatedly and their calls went unanswered for days. Some attempts to apply for benefits yielded a pop-up message that suggested using Netscape, a browser that effectively no longer exists.

Mr. Islam, who had never applied for jobless benefits in the 35 years since he immigrated from Bangladesh, said he was taken aback to hear that he had to find a fax machine to complete his claim.

But he put on a face mask and gloves and warily trudged off to a Staples store. Late this week, he was still waiting to hear how much he would receive, and when.

Are you unemployed because of the coronavirus outbreak?

More than 800,000 residents the New York region, including New Jersey and Connecticut, have applied for unemployment benefits in the last two weeks as the coronavirus pandemic has brought the economy to a virtual standstill.

If you are an employer or a worker who is unemployed, go here to share your story. A reporter or editor may contact you. Your information will not be published without your consent.