Berlin — Germany’s students and teachers have gradually returned to a more or less normal academic routine over the last couple weeks, but with the federal health agency reporting rising coronavirus infections, schools are in a tough position.

Just a few days after a number of German states reopened their schools, some were forced to close again, either partially or entirely, or to require some students and teachers to quarantine.

Two weeks after the new school year started in the capital Berlin, 38 schools have sent some students and teachers home because of confirmed COVID-19 cases.

In most cases, however, the schools had only one student or teacher with an infection, and in all of the cases the infections are believed to have come from outside the schools. While a couple closed for a day to wait for test results on some students or staff, none of Berlin’s schools have shut back down completely, and the vast majority in the region — more than 800 — have reported no cases.

Crucially, two weeks in, testing has shown no evidence of anyone contracting the coronavirus within a school. 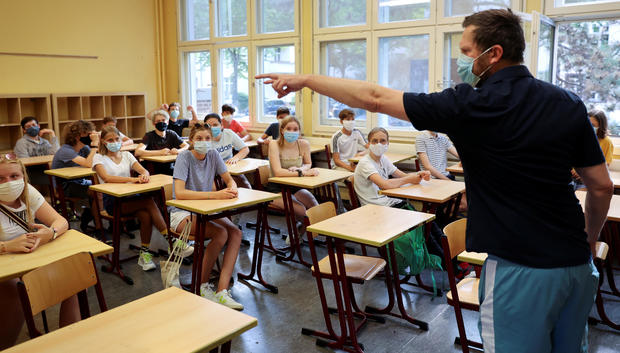 Pupils at the protestant high school “Zum Grauen Kloster” attend class on the first day after the summer holidays, amid the coronavirus pandemic, in Berlin, Germany, August 10, 2020. FABRIZIO BENSCH/REUTERS

“So far, these are isolated cases and not outbreaks,” Valerie Kirchberger, a paediatrician and coordinator of Berlin’s testing strategy, led by the Charité university hospital, told a local newspaper. “That reassures me.”

“Almost two weeks after the start of the school year, we can see that the schools themselves are not a hot spot. Infections are usually carried into schools from outside,” Berlin State Education Minister Sandra Scheeres said in a statement.

Instead, returning summer holidaymakers are believed to be behind the recent spike in the national infection rate — one reason mandatory testing has been introduced for anyone returning from regions deemed high-risk.

Germany’s politicians widely agree that students must be allowed to return to schools, and United Nations Secretary-General Antonio Guterres has warned that if governments don’t prioritize that in-class learning, the could face “a catastrophe for an entire generation.”

But many educators, and parents, are still nervous.

Germany’s national teachers’ union, the GEW, sees a return to normal school operations as high-risk, partly because government health authorities haven’t yet inspected all schools to check their anti-virus measures and hygiene plans.

But Lisa Kandler, an elementary school teacher in Berlin, told CBS News that she’s not seen any severe COVID-19 cases among children, and she’s not panicking.

“For us teachers, I don’t think the risks are higher than anywhere else. It would have been very difficult for us to continue teaching online, especially those children who just started first grade. Introducing them to school life like that and keeping schools shut is not a good alternative.”

Parent opinions appear divided. Some doubt safe schooling is even possible with the pandemic still actively spreading. Others have voiced concern, however, about the fact that schools remained shut for weeks while bars and restaurants were allowed to reopen their doors.

But Adina Holle told CBS News that when she heard her 9-year-old son Jonas could go back to school, “it was a great relief.”

“It would have been simply impossible to continue home-schooling him while we parents have to work from home,” she said. “The hygiene measures in schools might not be ideal, but isolating children much longer and keeping them away from learning and playing with others must be avoided.”

As in the U.S. and elsewhere, there’s been a fierce debate in Germany over the role children and young people play in spreading the coronavirus. Both advocates and sceptics of school opening can find arguments to back their positions in recent scientific studies.

Doctor on concerns about returning to school 05:10

Research carried out at schools in the state of Saxony in May and June suggest a low risk of infection. Another study, carried out in Baden-Württemberg, also found that children are at much lower risk of contracting the disease than their parents. A study in South Korea drew the conclusion that, while smaller children are rarely infectious, teenagers can be as infectious as adults.

Likewise in the U.K., where schools are set to reopen next week, the government was encouraged by a study showing little evidence that the virus was being transmitted in schools.

“The risks to children from COVID are very low and the risks of school closures we know are very serious,” Russell Viner, president of the Royal College of Paediatrics and Child Health and a member of a key British government advisory group, told The Sunday Times in reference to the research, which involved some 3,000 schools.

“I think we should be reassured by the admittedly quite scarce and incomplete data we have. But I think we’re in situation of uncertainty. And we either sit and damage our children a whole generation further, or we act on what is a small amount of reassuring data,” he said.

In contrast, U.S. researchers investigating an outbreak at a summer camp concluded that children of all ages can become infected, and that they do play a significant role in transmission of the virus.

Likewise, a study published last week by scientists at the Massachusetts General Hospital and Mass General Hospital for Children found that children can actually carry a much higher level of virus in their bodies than adults, even if they don’t develop symptoms, and thus they, “are a possible source of spreading this virus, and this should be taken into account in the planning stages for reopening schools.”

But the calculus isn’t just about the risks of coronavirus infections.

Jonas Schmidt-Chanasit, a virologist at the University of Hamburg, told CBS News that even if a feared “second wave” of infections forced Germany to order businesses closed again, keeping day cares and schools open for children should be a top priority.

“We cannot ignore the fact that domestic violence increased during the pandemic. Children need the routine and the safety of day-to-day school life, especially children who are already neglected by their parents or who are behind in their development,” he said.

The Charité hospital is conducting a long-term study at 24 schools and 12 day care centers in Berlin, testing the same group of people for both active coronavirus infections and for antibodies at regular intervals. It is also providing free COVID-19 tests for all day care and school employees, even if they have no symptoms.

Officials hope that data will soon reinforce the decision to get kids back in classrooms. In the meantime, social distancing has become an essential part of school life.

Playgrounds are divided into different sections and classes are kept apart. In some states face masks are mandatory at all times, while in others kids only have to put them on when they walk through hallways or use playgrounds.