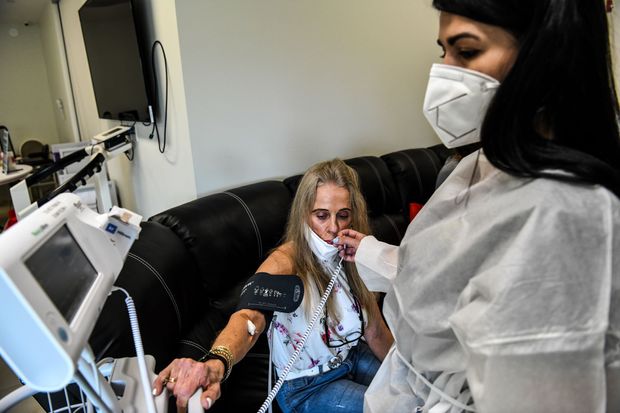 Many Americans are hesitant about taking a coronavirus vaccine. A volunteer was examined during a Covid-19 vaccine study in Hollywood, Fla., in August.

Several drug makers developing Covid-19 vaccines plan to issue a public pledge not to seek government approval until the shots have proven to be safe and effective, an unusual joint move among rivals that comes as they work to address concerns over a rush to mass vaccination.

A draft of the joint statement, still being finalized by companies including Pfizer Inc., PFE -0.11% Johnson & Johnson JNJ -0.64% and Moderna Inc. MRNA -3.45% and reviewed by The Wall Street Journal, commits to making the safety and well-being of vaccinated people the companies’ priority. The vaccine makers would also pledge to adhere to high scientific and ethical standards in the conduct of clinical studies and in the manufacturing processes.

The companies might issue the pledge as soon as early next week, according to two people familiar with the matter. The statement would join a growing number of public assurances by industry executives that they aren’t cutting corners in their rapid testing and manufacturing of the vaccines.

“We believe this pledge will help ensure public confidence in the Covid-19 vaccines that may ultimately be approved and adherence to the rigorous scientific and regulatory process by which they are evaluated,” the draft statement says.

It’s far from business as usual at the Indianapolis headquarters of Eli Lilly, with only a sixth of the pharma company’s employees working on-site to develop potential Covid-19 treatments. WSJ’s Peter Loftus takes us inside. Photo: Eli Lilly

Many Americans are skeptical or hesitant about taking a Covid-19 vaccine, in large part as a result of concerns that vaccine development, or potential authorizations, are being rushed. Vaccine development usually takes years, yet Covid-19 shots are progressing at a rapid pace as companies and countries rush to stop the spread of the coronavirus.

Now, spurred on by concerns over whether any such regulatory decision could come before a vaccine is fully vetted by regulators, scientists and industry executives are making unusually public assurances about commitment to their products working safely.

The companies’ draft statement says the drugmakers will submit applications for government emergency-use authorization or licensure of vaccines based on “substantial evidence of safety and efficacy” from Phase 3 clinical trials conducted under Food and Drug Administration guidance. Phase 3 studies, which are the final stages of testing, are designed to prove whether the shots can reduce rates of symptomatic Covid-19 disease compared with people without vaccination.

Several vaccines are in—or will soon start—large clinical trials of at least 30,000 people, with potential for interim results in the coming months, and possible emergency-use authorization or outright approval. Last week, the Centers for Disease Control and Prevention, which is expected to be involved in distributing vaccines, notified U.S. states that they should be ready to launch Covid-19 vaccination campaigns by November. An FDA meeting of outside experts to discuss Covid-19 vaccines was also scheduled for late October.

That timeline, just before the Nov. 3 presidential election, raised concerns among some scientists and other experts that the Trump administration would rush a vaccine to bolster President Trump’s re-election prospects. The U.S. government has pledged to deliver 300 million doses by January 2021 and is readying distribution.

The FDA has said it won’t green light a Covid-19 vaccine unless it is proven to be 50% effective compared with a placebo.

A vaccine FDA decision in the coming weeks would come on the heels of controversy of two high-profile emergency-use authorizations.

Its recent authorization of convalescent plasma to treat Covid-19 patients faced accusations of politicization, and criticism for not being based on a placebo-controlled study. The emergency-use authorization of hydroxychloroquine, an antimalarial touted by Mr. Trump, which was rescinded over concerns of safety and efficacy, also drew criticism.

As the coronavirus continues to spread around the globe, companies and academic labs are racing to develop a vaccine that would help society get back to normal. But there could also be costs to moving too quickly. WSJ’s Daniela Hernandez explains. Photo illustration: Laura Kammermann

Pfizer Chief Executive Albert Bourla said the company expects to have enough data in October to file for an emergency-use authorization if the study results are positive. For Pfizer and Moderna’s vaccines, subjects must return several weeks later to get a second dose, leaving just a few weeks of evaluation for even the first subjects enrolled for a coming regulatory filing.

Paul Offit, director of the Vaccine Education Center at Children’s Hospital of Philadelphia, who is on the FDA vaccine-advisory committee, said in an interview Thursday that it seemed unlikely there would be enough data to demonstrate efficacy of the Covid-19 vaccines in late-stage testing by the end of October. He expected that wouldn’t happen before early next year.

Government officials have in recent days tempered expectations about the timing of a vaccine.

Get a coronavirus briefing six days a week, and a weekly Health newsletter once the crisis abates: Sign up here.

Moncef Slaoui, lead adviser of the White House’s Covid-19 vaccine-development program, told Science Magazine this week that he would resign if Trump officials pushed for an emergency-use authorization he didn’t back. Mr. Slaoui, a former GlaxoSmithKline PLC executive, said on National Public Radio on Thursday that it was unlikely the trials’ data would be done by October.

Drug companies and executives have issued statements and spoken at forums intended to bolster trust in the vaccine-development process in recent days.

“We all understand the need to move with urgency given the pandemic, but we will not sacrifice safety under any set of circumstances,” Merck & Co.’s CEO Ken Frazier said Thursday at an event hosted by the International Federation of Pharmaceutical Manufacturers and Associations, a trade group. Merck said in July it planned to start the first human study for one of its experimental vaccines by the end of September, and a second one to enter testing by the end of this year.

At the same forum, Mr. Bourla, Pfizer’s CEO, said the company would never submit any vaccine for authorization or approval before “we feel it is safe and effective.” He also said Pfizer hasn’t felt any political pressure to rush a vaccine out. “We will not cut corners,” Mr. Bourla said.

The Biotechnology Innovation Organization, another trade group, also Thursday published an open letter to the industry stating principles for developing Covid-19 vaccines and treatments, and for assessing the release of data from the continuing clinical trials.

The letter also says, “Political considerations should be put aside by Republicans and Democrats.”

Write to Peter Loftus at peter.loftus@wsj.com and Jared S. Hopkins at jared.hopkins@wsj.com