The swirling remnants of Hurricane Delta are heading northward, bringing the threat of severe weather on Sunday to areas across the Southeast that have also been hit with flooding.

The National Weather Service (NWS) Weather Prediction Center (WPC) said that Delta, now a post-tropical cyclone, will continue to weaken as it spreads northward along the East Coast.

The remnants of Delta have triggered heavy rainstorms across the Southeast, which prompted flash flood and tornado warnings in the Atlanta area and other parts of Georgia.

Funnel clouds were spotted on Saturday and there were sightings of possible tornadoes, but only fallen trees and other storm damage were reported.

One of the storms on Saturday heavily damaged a homeless shelter in Covington, located east of Atlanta.

Shelter officials told FOX5 there were 40 people in the shelter at the time as the storm moved through, causing a portion of a wall to collapse.

Shelter director Clara Let said those who were staying there will be taken to a nearby gym for the short-term, but expressed concern over the long-term impacts.

“They do not have other shelters here. We are the only shelter,” she told FOX5. “They get three meals a day and they have their own sleeping area.”

Emergency officials said low-lying roads in parts of Atlanta and its suburbs were inundated by heavy rains and there were reports of downed trees.

WHAT IS A FLASH FLOOD: HERE’S WHAT YOU NEED TO KNOW

The Atlanta Fire Department said it responded to “over a dozen calls” for vehicles stuck in floodwaters. 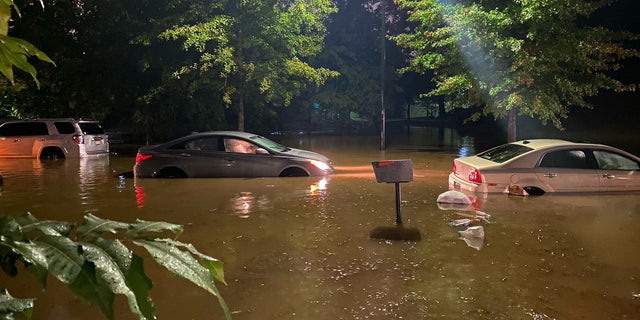 Several vehicles were stuck in floodwaters after Hurricane Delta’s remnants triggered rainstroms in the Atlanta area on Saturday, according to fire officials. (Atlanta Fire Department)

“Take the time to find an alternate route when faced with standing water,” the agency said.

The WPC said Sunday that areas from to the Southeast to the Mid-Atlantic are expected to see heavy rain and thunderstorms, with the greatest amounts expected to fall from the Carolinas to New Jersey.

“The chance for flash flooding is particularly evident over the Southern Appalachians on Sunday and Monday,” the WPC said.

Flash, urban and small stream flooding is forecast for parts of Georgia, the Carolinas, and Virginia with the Calcasieu and Vermillion river basins in Louisiana in danger of moderate to major river flooding in the coming week.

A few brief tornadoes are also possible in the Carolinas on Sunday, with several storms triggering tornado warnings throughout the morning.

Officials will spend the day investigating tornado reports across Georgia. One of the areas that saw impacts was Coweta County, where Newnan High School was damaged.

Officials confirmed to FOX5 there were no injures, but several downed trees and power lines.