At the southern stop, he brought back up his defense of keeping statues – including Confederate monuments – in place.

‘I signed a very important edict recently. Three months ago they were ripping down statues. I said you can rip them down but you’re going to serve 10 years in jail if you do. And as soon as I did that, incredibly you haven’t heard about statues coming down, have you? Statues or monuments, he continued. 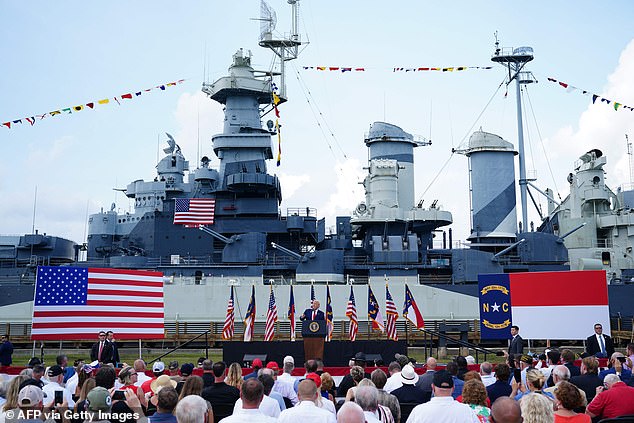 Trump spoke in front of the Battleship North Carolina in Wilmington, North Carolina, on September 2, 2020, the 75th anniversary of the end of WWII 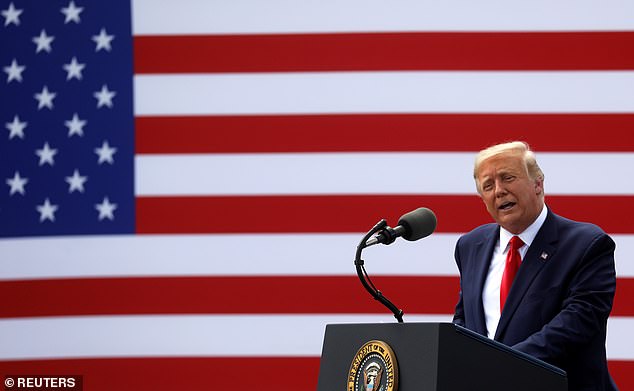 As he talked about the U.S.’s fight against fascism, he continued to go after rioters in cities who took to the streets in the aftermath of the shooting of Jacob Blake.

‘American warriors did not defeat fascism and oppression overseas only to watch our freedoms be trampled by violent mobs here at home,’ he said.

And when he joked about a World War II veteran’s age who was in the audience, he also used the opportunity to knock his Democratic rival, Joe Biden.

Trump’s remarks at the battleship were quick, as he tried to give Wilmington its distinction before a storm rolled through. Claps of thunder interrupted his remarks.

‘I want to thank you for being so nice to me,’ Trump told the crowd, which included Hershel ‘Woody’ Williams, a medal of honor recipient who flew down from Washington, D.C. on Air Force One. He called it a ‘tremendous honor’ to give the distinction to Wilmington.

The move marked the 75th anniversary of the end of the second World War. 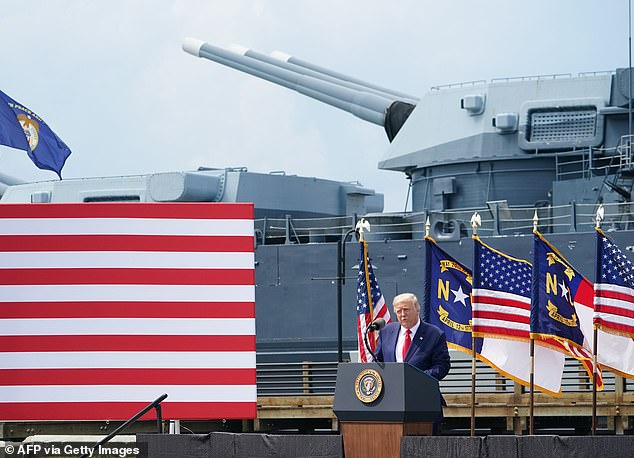 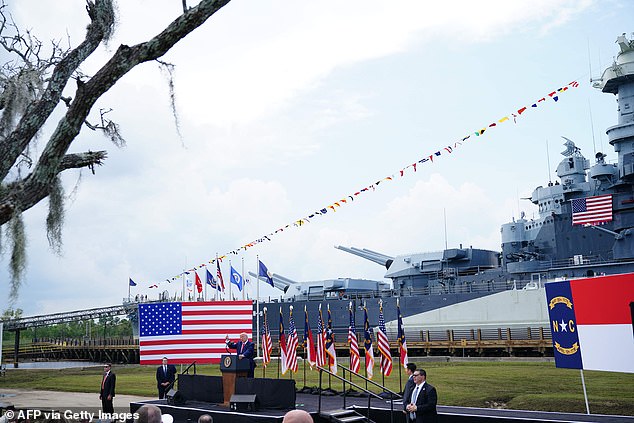 ‘American warriors did not defeat fascism and oppression overseas only to watch our freedoms be trampled by violent mobs here at home,’ said Trump, a day after visiting Kenosha, Wisconsin 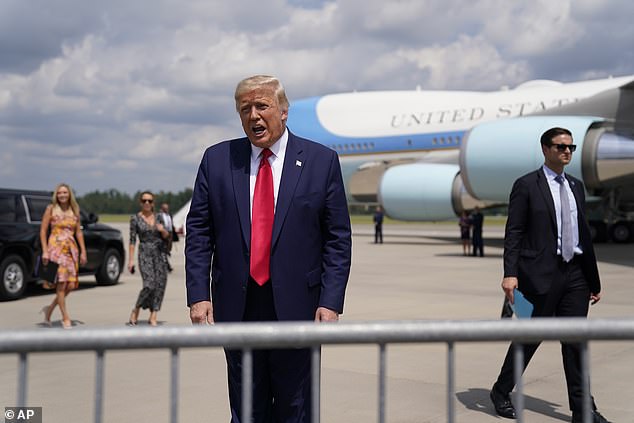 President Trump spent significant time greeting a crowd of hundreds at the Wilmington airport, going up and down the line and addressing them twice

Battleship North Carolina was the lead ship of the North Carolina battleships that were constructed in that era and saw action during World War II and also particpated in ‘Operation Magic Carpet,’ which brought American servicemembers home.

On Monday, White House press secretary Kayleigh McEnany told a reporter not to read too much into the fact that a city in North Carolina, which Trump needs to win the 2020 election, was selected.

‘No, there’s not a political purpose in this visit. This president is visiting to commemorate a great site in American history,’ she said.

But Trump spent significant time greeting supporters at the Wilmington airport, speaking twice and going up and down the line.

‘We’re rounding the curve on the China virus, vaccines are happening, therapeutics are happening,’ he told the crowd, who weren’t social distancing, with very few in masks.

His daughter-in-law Lara and her parents greeted Trump on the tarmac and he boasted to the crowd that his granddaughter was named ‘Carolina,’ after Lara Trump’s home state.

He also said he planned to win all the southern states plus New Hampshire and Minnesota.

‘It’s a disgrace what’s happening up there,’ he continued, an apparent reference to the protests and unrest that happened following the Memorial Day death of George Floyd.

He then brought up Kenosha, Wisconsin, where Jacob Blake was shot.

‘We straightened up that mess,’ he said. ‘What a horrible situation.’

As he arrived, Trump also greeted Sen. Thom Tillis, who’s in a tough political fight against Democrat Cal Cunningham to retain his seat.

Tillis got in hot water Thursday for removing his mask at the president’s Republican National Convention speech at the White House after uploading a picture to social media of him wearing it.

On Wednesday, Tillis took off his mask and then had it in his hand as the president arrived.

WILMINGTON AT WAR: WHY NORTH CAROLINA CITY IS BEING HONORED FOR WWII ROLE

With a population of just over 120,000, other cities might lay claim to bigger roles in World War II than Wilmington, North Carolina – but the ‘Port City’ played an outsized part in defeating Nazi Germany and the Japanese empire.

As FDR’s administration prepared for war in 1940, the city was chosen as the site for a new shipyard to be built by the Newport News Shipbuilding and Drydock Company.

The city was on deep water, close to main railroads, with plenty of free space and a ready workforce. The aim was modest – 25 Liberty ships by 1943.

The Liberty ships were not fighting vessels, but cargo ships used by the Navy and merchant marine and mass produced from a British design to rapidly augment the tiny existing fleet. 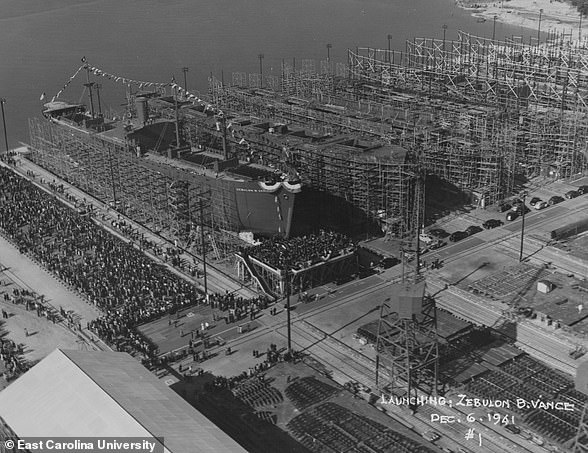 Transformation: Hours before Pearl Harbor, this was the scene at the newly-built Wilmington shipyard, where the first Liberty ship completed there, the S.S Zebulon B. Vance, was about to be launched. A total of 242 ships followed 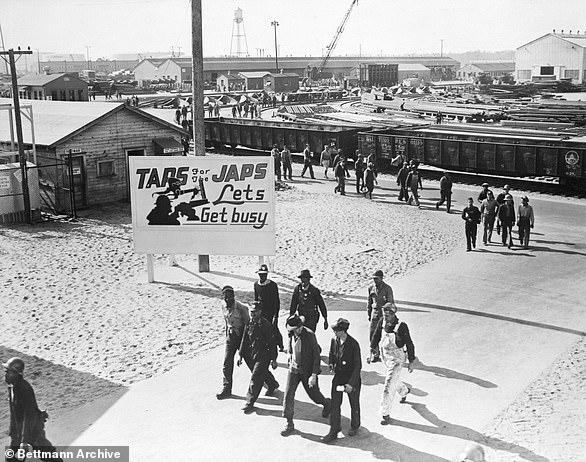 Wartime scene: This picture from February 1942 urged workers to use their hammers to make ‘Taps for The Japs’ on the steel of ships. The shipyard estimated that month that 18 million tons of shipping were being built in Wilmington at the time

As construction started, the orders went up, and hours before Pearl Harbor, the first ship was launched. A total of 242 followed – an astonishing achievement for a city which had never launched a Naval vessel before.

Its 126 Liberty ships and 177 larger vessels saw action in both the Atlantic and Pacific theaters. Four ships were scuttled off the Normandy beaches to help form a breakwater, and one was lost in the Pacific.

Liberty ships were not equipped to fight as full-scale warships but did carry anti-aircraft guns and other weapons.

But one of Wilmington’s ships, the Virgnia Dare, named for the first white child born on American soil, was credited with taking down seven Luftwaffe planes when it was part of a convoy from Scotland to the Russian Arctic port of Archangelsk in 1943.

Wilmington was transformed: the federal government expanded the airfield into a full-scale airport, built new roads, a vast bulkhead across the river, upgraded water and sewage systems for the workforce and even funded new schools.

By 1943 24,000 people were working at the shipyard, many of them women, and some of them African-American; the Jim Crow South had previously not allowed its black citizens into shipbuilding jobs.

The shipyard was not the only sign of war. Tens of thousands of troops passed through, and each weekend 35,000 servicemen came from nearby bases including Fort Bragg and Camp Lejeune for R&R.

North Carolina’s bases were home over the war to two million troops in training, more than any other state. 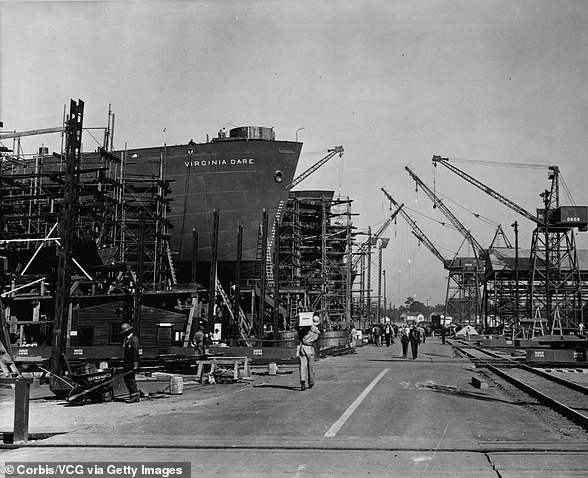 Credited with kills: The Virginia Dare, one of the Wilmington yard’s Liberty ships, was part of a convoy from Scotland to the Russian Arctic, when it shot down seven Luftwaffe planes

There were even Germans: three prisoner of war camps were built close to the city starting in 1943 with captured members of the Nazi forces in North Africa.

And there is a persistent claim – never proven or entirely debunked – that the nearby Ethyl-Dow chemical plant at Kure Beach was shelled by a German u-boat in July 1943.

That was the only night the shipyard went entirely dark, with locals claiming they heard artillery fire at the plant. The Navy investigated but never found any evidence Germans were nearby, or any shells – but the rumor has persisted.