Dr. Alveda King on John Lewis’ funeral: The left will ‘grab at any opportunity’ to politicize – Fox News

The left will “grab at any opportunity” to twist an occasion like the funeral of civil rights icon John Lewis into “a political moment,” Dr. Alveda King stated Friday.

In an interview on “Fox & Friends,” King said that she should have expected former President Barack Obama to “grab at” the chance.

“I have chosen not to politicize the death of Congressman Lewis, but to remember him as a peaceful, nonviolent warrior and encourage everyone to resolve our conflicts peacefully,” she remarked.

“Now, I know this is a celebration of John’s life. There are some who might say we shouldn’t dwell on such things. But that’s why I’m talking about it,” Obama explained to the attendees at Ebenezer Baptist Church in Atlanta. “John Lewis devoted his time on this Earth fighting the very attacks on democracy and what’s best in America that we are seeing circulate right now.”

He then launched into a discussion, hitting a plethora of topics including the Voting Rights Act, granting statehood to the District of Columbia and Puerto Rico, turning Election Day into a national holiday, implementing automatic voter registration, getting rid of the Senate’s filibuster, and nationwide civil unrest following the death of George Floyd.

However, according to King, Obama distorted history when he “took us back to the 1960s.”

Early on in his speech, Obama reflected on the life of young activist Lewis, who had been beaten by state troopers during the 1965 Selma-to-Montgomery march known as “Bloody Sunday.” 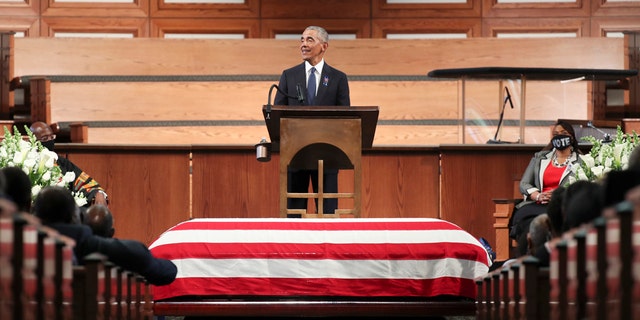 “Today, when the National Guard goes in — sent by the president for example — or state troopers, they are trying to protect the people of America in every community. And, to save lives and protect people,” she said. “There is a totally distinct difference.”

As he grew up, Lewis fought against oppression in other ways, leading to a five-term career representing the state of Georgia.

King said drawing parallels without naming names and alleging that there is “an effort to undermine the voting process,” was an incorrect characterization of the current administration’s message ahead of the November presidential election.

“You know, actually President Trump is saying: ‘People, please pay attention. We do want you to vote. Use your absentee ballots. Go to the polls.’ He has even encouraged, you know, people to be poll watchers and poll workers and that kind of thing,” she said.

“President Trump is not trying to suppress the vote,” King asserted.  “We do want people to vote safely. And, we need the voting process to be fair. And so, to politicize the funeral of a peaceful warrior — I mean, I guess they grabbed at an opportunity to be political,” she concluded.