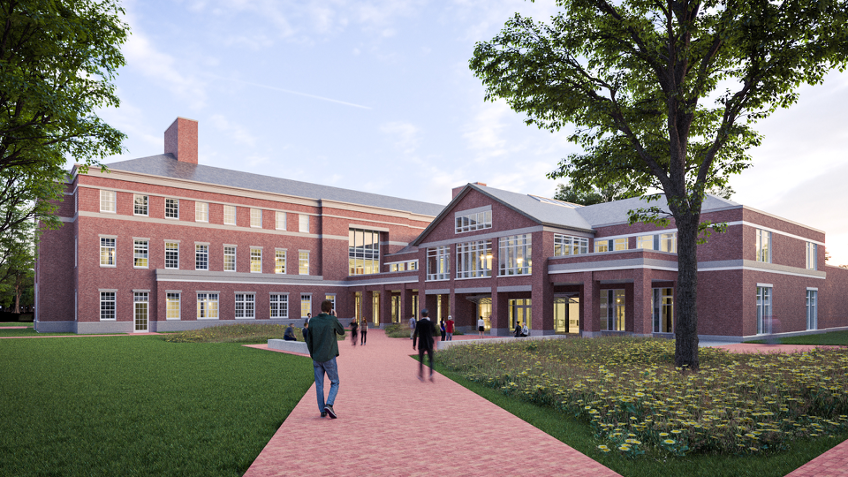 This rendering shows the first two buildings planned for Elon University’s new Innovation Quad. Elon hopes to start construction on Founders Hall (right) and IQ Two (three-story building at left) in 2021. The buildings will be located on the east side of campus near Elon’s existing science building.

ELON — Elon University has named the first of two buildings for a planned new science and technology section of its campus.

The private university said this week that the first building on its Innovation Quad will be called Founders Hall to honor Elon presidents and others who helped shape the 131-year-old institution. The naming announcement follows a donation from long-time Elon supporters Furman and Susan Moseley.

The new Innovation Quad on the east side of campus will be the new home of Elon’s engineering and physics departments and serve as a hub for existing and new STEM programs. Elon said it hopes to start construction in 2021 on the first two buildings in the new quad, which eventually could include more academic buildings, residence halls and other facilities to serve as business incubators and design hubs for students and faculty members regardless of academic discipline.

Founders Hall, one of the new quad’s first two buildings, will go up atop a parking lot north of Elon’s science building. The 20,000-square foot facility will have design labs for engineering, a virtual reality classroom and large workshops to create designs and product prototypes.

The quad’s second building, known for now as IQ Two, will have classrooms, labs, faculty offices and group study rooms in its 40,000 square feet. Located next to Founders Hall, the three-story building will be used for study and research in biomedicine, physics, astronomy, biophysics and mechanical and environmental engineering.

The donors to the Innovation Quad project are a Seattle couple well known as Elon.

Furman Moseley is a 1956 graduate who attended Elon on a football scholarship. He’s the retired chairman of Simpson Paper Co., a privately held forest products company in Washington state that’s now part of Green Diamond Resource Co. of Seattle. Susan Moseley is president of a Seattle charitable foundation. The Moseley name is on Elon’s student center, and the couple has donated money for several other major university projects.

The donation announced this week also includes additional money for the Susan Scholarships, an endowment the couple created in 2007. The fund provides four annual $15,000 scholarships to young women who couldn’t otherwise afford to attend Elon.

Elon declined to disclose the amount of the Moseley’s latest donation. A spokesman called it “one of the largest gifts” in university history.

The donation from the Moseleys puts the total of Elon’s current fundraising campaign at $195 million. With the Elon LEADS campaign, the university wants to raise $250 million by mid-2022.