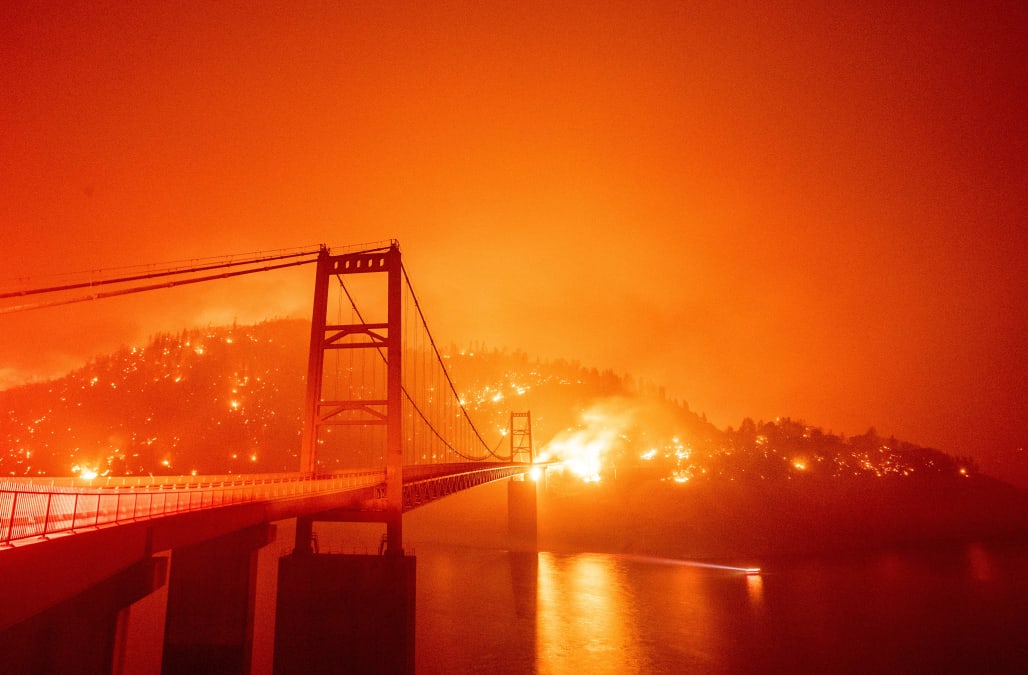 SHAVER LAKE, Calif. (AP) — Wildfires raged unchecked across parts of the Western U.S. on Wednesday amid gusty and dry conditions, but forecasters said some weather relief was in sight that could help firefighters who have been overwhelmed by the blazes.

In California, winds stoked unprecedented numbers of fires that have forced rescues and evacuations. In Washington, more acres burned in a single day than firefighters usually see all year. Fires also forced people to flee in Oregon and Idaho.

A temperature plunge of as much as 60 degrees, caused by a dramatic intrusion of polar air, helped contain wildfires that spread in Colorado and Montana in hot, windy weather.

“The significantly colder airmass is helping reduce critical fire conditions across the West, however most of West coastline and adjacent counties have Red Flag warnings in effect for part of today,” the National Weather Service said.

Diminishing winds were possible by Thursday, “bringing some relief to the ongoing fires and fire weather threat,” forecasters said.

In California on Tuesday, 14 firefighters were forced to deploy emergency shelters as flames overtook them and destroyed the Nacimiento Station, a fire station in the Los Padres National Forest on the state’s central coast, the U.S. Forest Service said.

They suffered burns and smoke inhalation, and three were flown to a hospital in Fresno, where one was in critical condition.

Over the past three days, helicopters were used to rescue hundreds of people stranded in the burning Sierra National Forest, where a fire has destroyed 365 buildings, including at least 45 homes. About 5,000 buildings were threatened, fire officials said.

Flames threatened the foothill community of Auberry between Shaver Lake and Fresno.

In Southern California, fires burned in the mountains of Los Angeles, San Bernardino and San Diego counties, with the potential for the region’s notorious Santa Ana winds to push flames out of wilderness and into communities.

People in a half-dozen foothill communities east of Los Angeles were being told to stay alert because of a fire in the Angeles National Forest.

The U.S. Forest Service on Monday decided to close all eight national forests in the southern half of the state and shutter campgrounds statewide.

More than 14,000 firefighters are battling fires. Two of the three largest blazes in state history are burning in the San Francisco Bay Area, though they are largely contained after burning for three weeks.

California has already set a record with nearly 2.3 million acres (930,800 hectares) burned this year — surpassing a record set just two years ago — and the worst part of the wildfire season is only beginning.

The threat of winds tearing down power lines or hurling debris into them and sparking a wildfire prompted Pacific Gas & Electric, the state’s largest utility, to shut off power to 172,000 customers in Northern California last weekend. More outages were expected Wednesday, with power not expected to be completely restored until Wednesday night.

To the south, the Southern California Edison utility warned that about 55,000 customer accounts may lose power while San Diego Gas & Electric said 16,700 customers were at risk of a preemptive outage.

In the Sierra National Forest east of Fresno, dozens of campers and hikers were stranded at the Vermilion Valley Resort after the only road in — a narrow route snaking along a steep cliff — was closed Sunday because of the so-called Creek Fire.

Well before dawn Tuesday, the sound of helicopter blades chopping through the air awoke Katelyn Mueller, bringing relief after two anxious nights camping in the smoke.

“It was probably the one time you’re excited to hear a helicopter,” Mueller said. “You could almost feel a sigh of relief seeing it come in.”

The use of military helicopters to rescue a large number of civilians for a second day — 164 before dawn Tuesday and 214 people from a wooded camping area on Saturday — is rare, if not unprecedented.

“This is emblematic of how fast that fire was moving, plus the physical geography of that environment with one road in and one road out,” said Char Miller, a professor of environmental analysis at Pomona College who has written extensively about wildfires. “Unless you wanted an absolute human disaster, you had to move fast.”

Numerous studies in recent years have linked bigger wildfires in America to global warming from the burning of coal, oil and gas, especially because climate change has made California much drier, making plants more flammable.

“The frequency of extreme wild fire weather has doubled in California over the past four decades, with the main driver being the effect of rising temperature on dry fuels, meaning that the fuel loads are now frequently at record or near-record levels when ignition occurs and when strong winds blow,” Stanford University climate scientist Noah Diffenbaugh said in an email.