Yum China has raised more than $2bn from a secondary share sale in Hong Kong, marking the latest “homecoming” listing by a major US-listed Chinese company.

On Friday the fast food-chain operator sold almost 42m shares at HK$412 ($53.16), according to the company, which represented a discount of almost 5 per cent to the closing level of its New York-listed stock a day earlier.

Total proceeds of HK$17.3bn ($2.2bn) would be spent on expanding the company’s restaurant network and investing in “digitalisation,” it said.

Yum China, which operates KFC, Pizza Hut and Taco Bell restaurants in the country, is the latest big-ticket Chinese company with a listing in the US to sell shares in Hong Kong as relations between Beijing and Washington reach their worst state in decades.

Some local traders and strategists were sceptical that Yum would receive as warm a reception from investors as other companies that recently carried out secondary share placements in the city, such as NetEase, a gaming group, and online retailer JD.com. Both have both benefited from a global rally in technology stocks since their debuts in June.

Yum’s Hong Kong shares are due to start trading next Thursday. 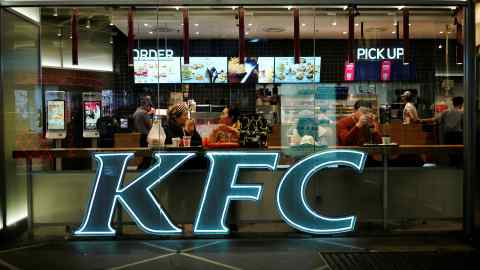 “Five to seven per cent over its pricing in Hong Kong is achievable [on its first trading day], but more than that? I don’t think so,” said Dickie Wong, head of research at Kingston Securities.

“If investors want to buy [Yum China], they can simply buy it in the US”, he added. “Hong Kong investors are focused more on ‘new economy’ stocks.”

Andy Maynard, a trader at China Renaissance Securities, agreed that Yum might not be met with the same “furore” as JD.com or NetEase, which are up 32 per cent and 15 per cent, respectively, since their Hong Kong listings. He noted that there was a lot of pressure on Yum’s network of restaurants in “the current Covid environment”.

The Trump administration has proposed forcing Chinese companies to delist from the Nasdaq and New York Stock Exchange unless US regulators are given access to the work papers from audit reports. The Senate passed legislation in May to the same effect.

That has spurred some of the largest Chinese groups listed in the US to launch back-up offerings in Hong Kong in case they are forced to delist. NetEase raised almost $3bn in Hong Kong, while JD.com sold shares worth almost $4bn.

The homecomings are a boon for the city’s financial industry and Hong Kong Exchanges and Clearing, the dominant exchange operator, in particular. China Renaissance Securities estimates that 32 New York-listed Chinese companies with a total market capitalisation of almost $200bn could be eligible for a secondary share offering in the Asian financial hub, given their ownership and governance structures.

US-China tensions have also convinced some major tech companies to avoid listing in New York entirely. Ant Group, the Chinese payments company controlled by Alibaba, is expected to offer up to 15 per cent of its shares in Hong Kong and Shanghai in an initial public offering that could raise $30bn, making it the world’s largest IPO.

Alibaba, which last year raised almost $13bn with its own share offering in Hong Kong, was added to the territory’s benchmark Hang Seng index last month in a shift investors said reflected the growing dominance of mainland Chinese tech groups in the city.