Pence made an appearance at an outdoor event in Boulder City, Nev., on Thursday after the campaign agreed to limit attendance to a state-mandated capacity of 250. The Secret Service and campaign were supposed to enforce a mask mandate, but many attendees didn’t wear face coverings.

“Boulder City has been able to maintain a low infection since the beginning of the Covid-19 pandemic because of compliance and people’s willingness to follow the state directive,” said Lisa LaPlante, communications manager for Boulder City. “It is disappointing to see that some people in the crowd opted to go maskless.”

Some experts believe Pence should be in quarantine under CDC guidelines because he’s still within the incubation window for coronavirus infection after a Sept. 26 White House event for Supreme Court nominee Amy Coney Barrett. Multiple attendees of that event later tested positive for Covid-19. Pence has tested negative, and was cleared by federal health officials to participate in Wednesday night’s debate with Sen. Kamala Harris (D-Calif.).

A Pence event in Maricopa County, Ariz., Thursday still took place despite local officials discouraging gatherings of more than 10 people. A state executive order still limits indoor and outdoor gatherings to 50 people, but it does include exceptions.

Elsewhere, officials in North Carolina’s Guilford and Union counties say they didn’t get a heads up that Eric Trump was holding campaign stops at a farm and a metal manufacturing plant on Thursday. The president’s son attended the first presidential debate in Cleveland last week, where he was photographed without a mask and sitting near others who later tested positive, including first lady Melania Trump. He has since tested negative.

In Naples, Fla., where former Trump campaign manager Corey Lewandowski and former Florida attorney general Pam Bondi will speak at a Veterans of Foreign Wars post on Thursday, local health officials were unaware of the event until they were contacted by POLITICO. Lewandowski on Friday told CBS he was self-isolating after attending a Trump Minnesota fundraiser.

Public health experts have said the Trump campaign should be actively limiting crowds and encouraging social distancing and masks, especially because of Trumpworld’s ongoing bout with the coronavirus.

“Big rallies just shouldn’t happen,” said Georges Benjamin, the executive director of the American Public Health Association. For big and small events, both campaigns should coordinate with local authorities, he said, particularly as Trump officials are “coming from an environment where there’s been a major outbreak.”

The Trump campaign said it provides masks and encourages their use, in addition to temperature checks and abundant hand sanitizer. At outdoor events for Pence and Eric Trump on Thursday, chairs were spaced out. 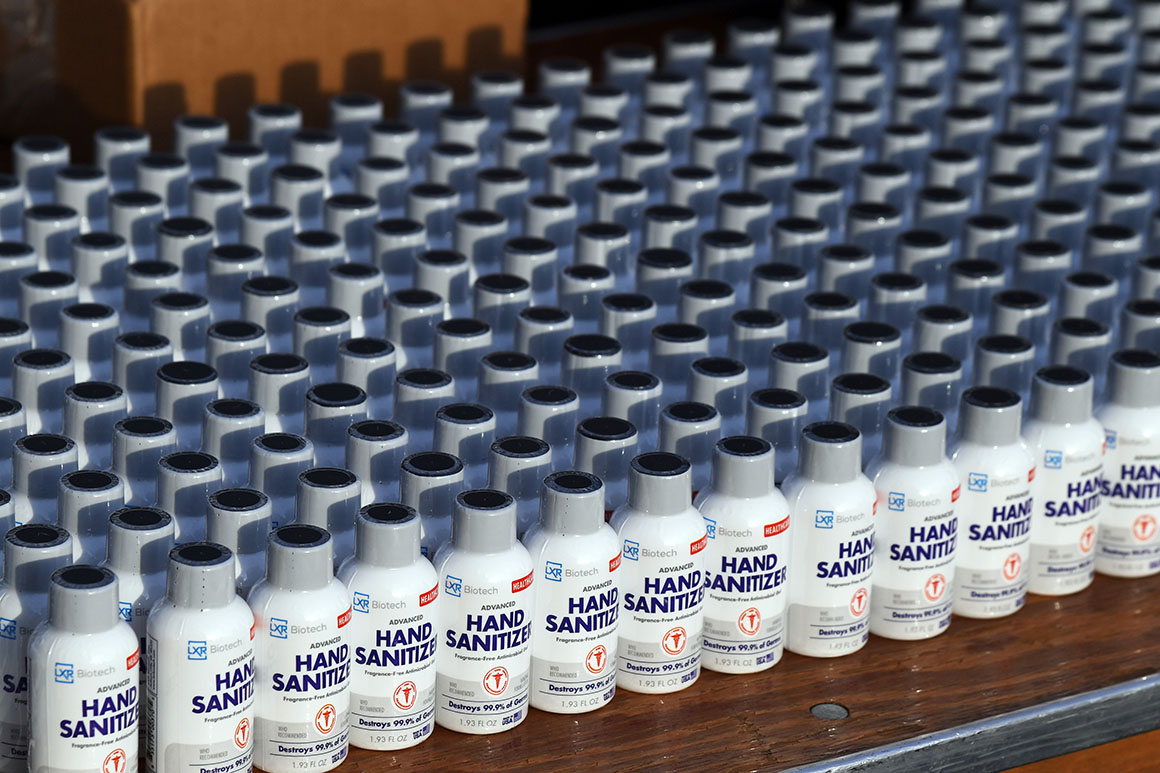 Bottles of hand sanitizer are set up for attendees arriving at a rally for Vice President Mike Pence at the Boulder City Airport on October 8, 2020 in Boulder City, Nevada. | Ethan Miller/Getty Images

The campaign’s event registration also includes a note at the bottom aimed at protecting the campaign and the venue from being sued if an attendee tests positive.

And events in the past have featured tightly packed crowds of supporters, most not wearing masks, and long lines of people waiting to get in. The White House celebration of Barrett’s nomination provided a similar scene, with VIPs bunched together in the Rose Garden. Trump has also held several indoor rallies during the pandemic — including mass events in Oklahoma and Nevada — over the objections of local health officials.

Biden’s campaign did not say what preparations are being made with local officials in advance of the events. But its events tend to be much smaller, with more mandated social distancing. According to a campaign spokesperson, masks are required at events and the campaign adheres to the capacity limits in each state.

Local officials worry about a repeat of last week, when health officials in Minnesota, New Jersey and Washington, D.C., scrambled to figure out who may have been exposed to the virus at a series of presidential events leading up to the disclosure of Trump’s positive test last Friday. In some cases, there’s been little cooperation from the White House, aggravating local officials trying to prevent broader outbreaks.

A Trump campaign spokesperson insisted that the campaign has worked to provide local and state health departments with any information they’ve sought when they’ve reached out for contact tracing help.

But in New Jersey, the Republican National Committee only provided the email addresses of guests who mingled both indoors and outdoors with Trump at a fundraiser at his golf course hours before he disclosed his positive coronavirus test. Local health officials were left without phone numbers and email addresses that would have helped them quickly alert attendees of their exposure to the virus.

And in Washington, D.C. the White House refused officials’ requests for days following the Rose Garden event, withholding information on who tested positive and what, if any, contact tracing they had conducted. It wasn’t until Wednesday, 11 days after the event, that the city’s mayor said she had connected with the White House’s medical office. On Thursday, the city sent out its own notice urging all White House staff to quarantine and seek testing, citing its “preliminary understanding that there has been limited contact tracing performed to date.”

“We have been unable to get the information we need to protect D.C. residents,” complained Del. Eleanor Holmes Norton (D-D.C.). “The White House could be making the virus more serious here, and they’re not giving us the kind of advance warning we need.”

Public health officials stress that time is of the essence when containing outbreaks. The District of Columbia health department generally aims to contact everyone who tests positive within one day so it can establish who else they may have exposed and encourage their close contacts to isolate.