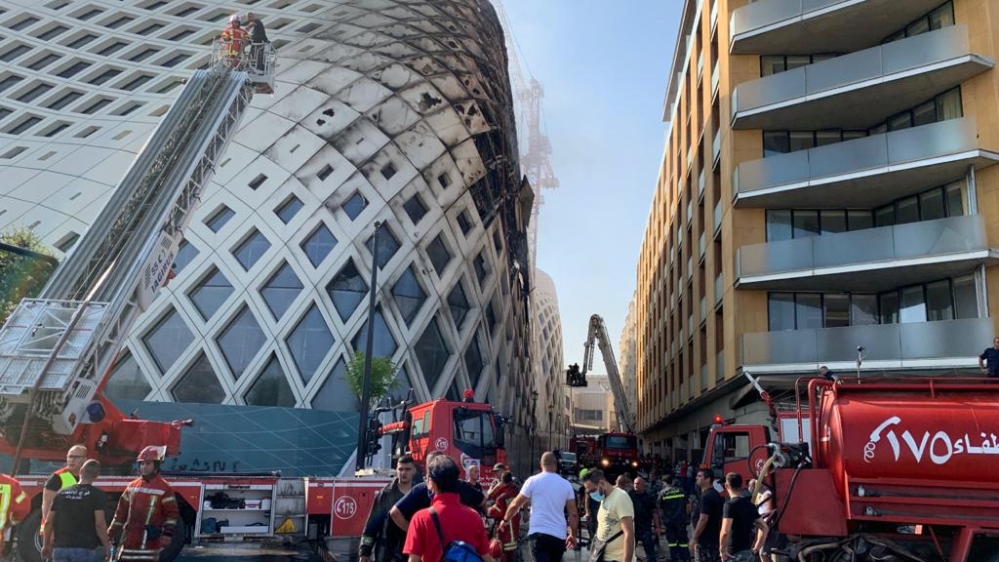 A fire has broken out in a downtown Beirut building near the city’s port where an explosion last month killed nearly 200 people, wounded thousands and left the city’s residents traumatised.

It was not immediately clear what caused the fire in one of the city’s best-known buildings that was the work of the late Iraq-born British architect, Zaha Hadid.

The oval-shaped building was still under construction and sits on the main road that passes by the port.

“It’s terrible. It’s unbelievable,” said Joe Sayegh, 48, who had been on a jog through the city before coming to the scene. “Every day we have a problem.”

Lebanese broadcaster al-Jadeed earlier showed images of smoke billowing from the building, located near Beirut Souks, a 100,000-square-metre shopping mall in the centre of the city.

Good morning – in today’s news from #Lebanon, a huge fire erupted in the Beirut souks, in one of Zaha Hadid’s signature design buildings. pic.twitter.com/Ahs1pIc0bf

A civil defence official said they extinguished the fire, adding that an investigation will be opened. There were no immediate reports of injuries.

“We received a call that there is a fire near Majidieh mosque. When we first arrived the fire was very strong. This is a building under construction known as the oval building in Beirut’s markets,” said Fadi Mazboudi, member of the fire brigade department.

“Thank God, firefighters and the civil defence were able to put the fire under control as fast as possible despite the limited capabilities.”

It was the third fire in the area within a week following two recent fires at the port of Beirut, including a huge one on Thursday that raised panic among residents. Another blaze earlier this month was extinguished quickly. The causes of those fires are unclear.

Beirut’s residents are still shaken by the fire that led to an enormous blast on August 4, killing nearly 200 people, injuring 6,500 and causing damage worth billions of dollars.

The explosion of around 2,750 tonnes of ammonium nitrate stored at the port for six years also left a quarter of a million people homeless.

The cause of the explosion and the fire that led to it are still under investigation. The blast led to the government’s resignation six days later.

Lebanon is gripped by an unprecedented economic crisis and financial collapse, blamed on decades of mismanagement and corruption by an entrenched political class.

France is pressing Lebanon to form a new government to tackle endemic corruption and implement reforms to unlock aid. But many Lebanese remain sceptical that Lebanon’s political elite can chart a new course.

“With these people, if they are the same people, nothing will change,” Sayegh said.