Firefighters get a ‘toehold’ on fire in Santa Cruz Mountains, but progress may not last – The Mercury News 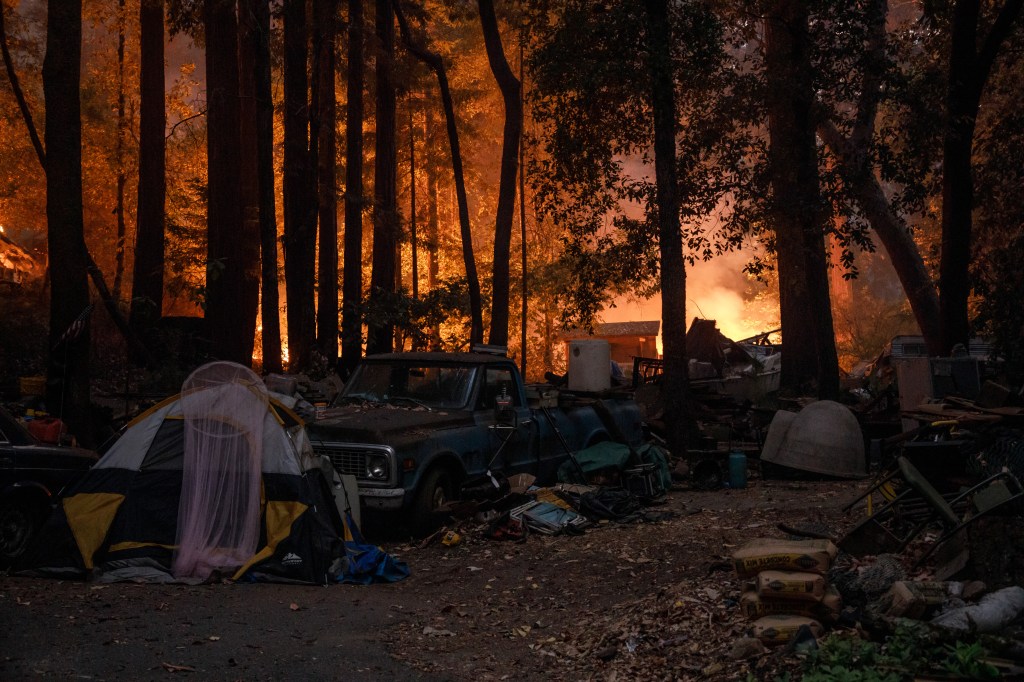 Firefighters reported progress for the first time Saturday in containing the collection of fires raging across Santa Cruz and San Mateo counties, but warned that the trend could quickly change with weather conditions.

Calmer winds, lower temperatures and moisture from the marine layer allowed crews to form stronger fire lines from Davenport to La Honda against the 63,000-acre CZU Complex fire, Cal Fire officials said in a 6 a.m. briefing Saturday. The blaze is about 5% contained and has destroyed 97 structures.

The weather “gave us an opportunity to get a hold of, and get some lines constructed, and get a little bit of a toehold into this incident,” said Cal Fire Battalion Chief Mark Brunton, adding, “A really big win for us yesterday, fantastic job by our folks.”

Crews in La Honda and Pescadero to the north and Davenport to the south reported fires were spreading but managed to keep firm control lines against the flames, Brunton said. Along Highway 9, the blaze made a small push into Boulder Creek.

The fire officially grew by 6,000 acres since Friday, although some of that increase is thanks to more accurate mapping, officials said.

Still, the progress could quickly fade. The National Weather Service issued a “fire watch” from Sunday to Tuesday as thunderstorms move northward — potentially causing another round of dry lightning strikes. The marine layer is also expected to subside as temperatures rise.

Firefighting resources also remain limited, said Deputy Fire Chief Jonathan Cox, especially in the Ben Lomond and Bonny Doon area, where some locals have refused to evacuate in favor of trying to save their homes. Crews are stuck waiting on help from out of state after Gov. Gavin Newsom called on Arizona, Oregon, Washington, Texas, Nevada and New Mexico to provide engines.

“It could be days,” Cox said. “We’re seven days into this, and we’re getting out-of-state resources just trickling in.”

The North Bay’s LNU Complex fire meanwhile grew by about 12,000 acres overnight to 314,207 acres across Napa, Solano, Sonoma, Lake and Yolo counties and is 15% contained as of Saturday morning. A total of 560 structures have been destroyed with another 30,500 threatened.

The SCU Complex has burned 291,968 acres across Santa Clara, Alameda, San Joaquin and Stanislaus counties — an increase of about 17,000 acres overnight — and was 10% contained as of Saturday morning. It has destroyed five structures and threatens 20,065 more.