Florida has announced a ban on alcohol consumption at its bars after its daily confirmed coronavirus cases neared 9,000. The Florida agency that governs bars announced the ban on Twitter Friday just moments after the state’s Department of Health reported 8,942 new confirmed cases – topping the previous record of 5,500 set on Wednesday.

State officials have attributed much of the new outbreak to young adults flocking to bars after they reopened in most of the state about a month ago, with many of them ignoring social distancing restrictions aimed at lowering the virus’s spread.

More than 24,000 new cases have been reported since Saturday, accounting more than a fifth of the 111,724 cases confirmed since March 1. The department had not updated its death total, which still stood at 3,327.

The seven-day average for positive tests dropped slightly to 13.4%, down 1 percentage point from Thursday but still triple the rate of 3.8% of June 1. 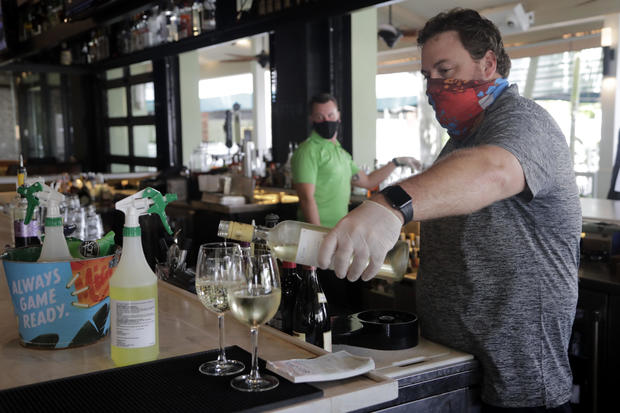 Bartender Jesse Phillips wears a protective mask and gloves as he pours wine at the Riverside Hotel’s Boathouse restaurant during the coronavirus pandemic, May 26, 2020, in Fort Lauderdale, Fla.  Lynne Sladky / AP

Florida is one of several states seeing spikes in new cases, leading to changes. On Thursday, Texas Governor Greg Abbott announced the state’s reopening has been halted.

“The State of Texas will pause any further phases to open Texas as the state responds to the recent increase in positive COVID-19 cases and hospitalizations,” reads a press release from the governor’s office.

Businesses in the state that were already permitted to open under its previous phases of reopening can “continue to operate at the designated occupancy levels and under the minimum standard health protocols provided by the Texas Department of State Health Services,” according to the statement.