The twisted plot in the tawdry tale of Jerry Falwell Jr. and a former Miami pool boy took yet another turn Wednesday after Giancarlo Granda called the former Liberty University president “a predator” and claimed Falwell Jr. sent the now 29-year-old a picture of a student exposing herself and had participated in three-way video calls earlier this year.

Granda also pushed back on allegations that he was blackmailing the couple.

“The Falwells would have you believe that I seduced Becki [Falwell] into an affair without Jerry’s knowledge and then spent the intervening seven years trying to extort them,” Granda told NBC’s “Today” show Wednesday. “Of course, the truth is, they approached me. She invited me into their hotel room.”

Fallwell Jr. did not immediately return Fox News’ requests for comment on Wednesday.

Granda said he was engaged in a long-term relationship with Falwell Jr. and his wife, Becki, in which Granda engaged in sexual acts with Becki while Falwell Jr. looked on.

Falwell Jr. has refuted that claim and pinned the blame on his wife. He said he was hyper-focused on Liberty University after taking over as president in 2007 and that it likely led to his wife’s indiscretion.

“During that time, I kind of neglected my wife and kids because I was so immersed in Liberty and making sure it was successful, and that’s probably what caused Becki’s mistake,” he told NPR.

He also said Granda became obsessive and that the situation turned into a “fatal attraction” and that Granda had threatened to expose the affair.

Falwell Jr. claimed that the threat triggered an emotional roller coaster for his family ahead of his resignation from the high-profile collegiate post. He also claimed they were “suffering in silence” while “simultaneously trying to manage and deal with this increasingly threatening behavior, which only worsened over time.” 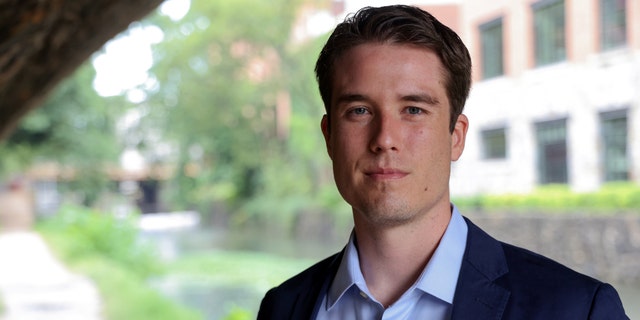 Giancarlo Granda, who was befriended by Liberty University President Jerry Falwell Jr and his wife Rebecca while he was working as a pool attendant at a luxury Miami Beach hotel. (Reuters)

The Falwells met Granda when he was 20 years old and working as a pool attendant at the Fontainebleau Miami Beach hotel in March 2012.

“Becki and I developed an intimate relationship and Jerry enjoyed watching from the corner of the room” Granda said in an interview with Reuters. He described the meet-ups as frequent — “multiple times per year” — and said they took place at hotels in Miami and New York and at the Falwells’ home in Virginia.

The fallout from Granda’s allegations, as well as a series of other personal scandals, clouded Falwell Jr.’s chances of ever returning as president of the conservative Christian college in Virginia.

JERRY FALWELL JR. MAY BE OWNED $10.5M BY LIBERTY UNIVERSITY

On Tuesday, Falwell confirmed that he resigned from his post.

The Lynchburg, Va.-based university was founded by Falwell Jr.’s late father, the Rev. Jerry Falwell Sr., and abides by a strict conduct code that states sexual activity is only permitted between one man and one woman within marriage.

Falwell Jr.’s departure comes after he agreed earlier this month to take an indefinite leave of absence for posting a picture of himself with a young woman on a yacht whose zipper was undone. She was his wife’s assistant.