On Nov. 8, 2019, Jenkins pleaded guilty to conspiracy to violate federal law, conspiracy to possess with intent to distribute a controlled substance and two counts of visa fraud.

Three months before sentencing, Jenkins wrote a letter to Anderson asking for leniency for his co-defendants who served in the Orangeburg County Sheriff’s Office. They are among nine people who have pleaded guilty to various charges in the case. 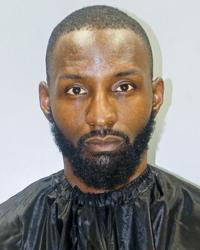 Jenkins praised the former deputies for carrying themselves with respect and dignity throughout their law enforcement careers.

“During our time of incarceration, I personally observed them admonish their involvement in this crime, sir, and ask God for forgiveness. I honestly believed that temptation of fast money was the door for evil to enter,” he wrote.

“My relationship with Hunter was one in which I viewed him as a big brother or uncle figure. I wanted to be a member of his fraternity. Hunter was really my only male source of guidance on a daily basis. I trusted him even when my soul was not,” Jenkins wrote.

Hunter pleaded guilty to conspiracy to possess with intent to distribute cocaine and methamphetamine and four counts of visa fraud. He has not yet been sentenced.

Jenkins said, “My career in law enforcement has been marked by the loss of fellow officers in the line of duty, awards and recommendations from across our county. It was truly a privilege to serve our community and as I have said to so many of those citizens how deeply sorry I am in letting them down and have asked for forgiveness and prayers for me and my family.”

For the past year, Jenkins has been working at a HVAC plant.

“I wake up every morning thanking God for the opportunity to continue to provide for my family and daughters,” he said.

Jenkins wrote that he’s found camaraderie with his work team there.

“They have accepted me even when the local newspapers show me in a negative view. I can always depend on them for hugs and words of encouragement. I have found that I have been able to share my faults with some of the young black males that I work with when I have seen or hear them doing actions that will negatively affect them. Being able to encourage friends that I have in law enforcement to do their jobs the right way and not to fall into the type of disarray that I did will always be a priority of mine. With the current state of police and community relations, I look forward to sharing my story with other officers who think this could never happen to them, your honor,” he wrote.

“He became my hands and my feet,” she said of her son, “I don’t think I could’ve made it if not for LaCra. He was what every mother would wish for in a son when life throws a heartbreak your way.”

In March 2019, the defendants were indicted in various schemes.

One involved the fabrication of documents that allowed some foreigners to remain in the United States longer than otherwise allowed.

The scheme turned into a sting operation by the Federal Bureau of Investigation.