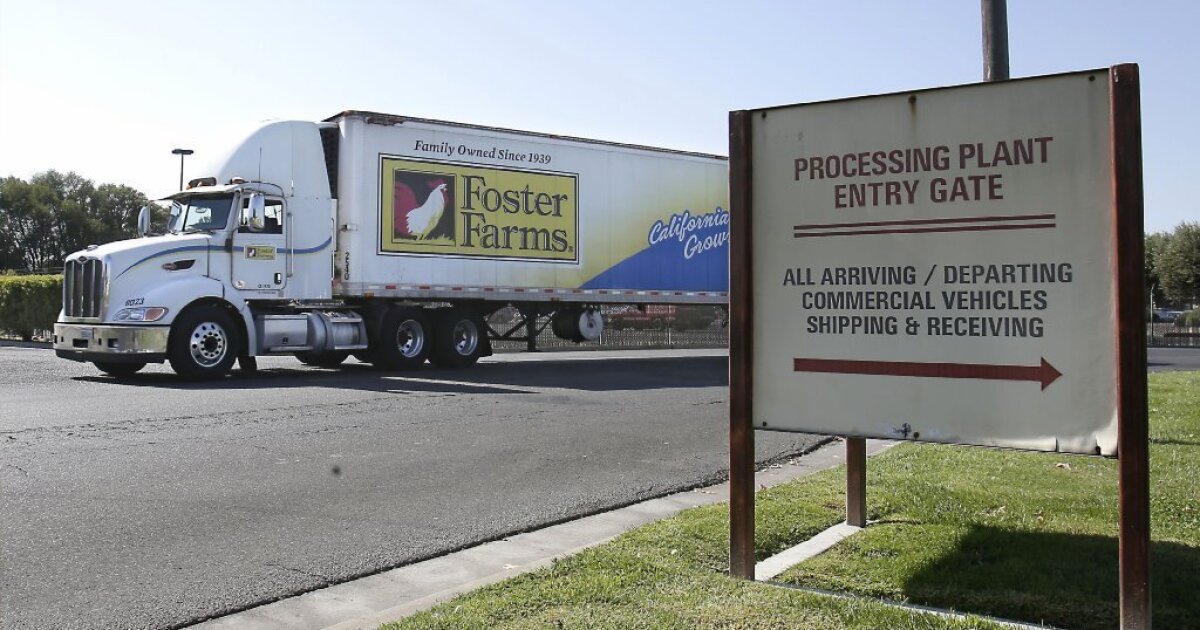 Foster Farms announced Saturday that it would comply with a Merced County health department order and temporarily close one of its poultry plants in Livingston, Calif., the site of a coronavirus outbreak that has left eight workers dead.

The outbreak at the Central Valley facility has persisted for at least two months, according to the Department of Public Health. Officials said the company did not complete the widespread testing of employees that the county first recommended and then ordered.

The company said in a statement that it would close the plant Tuesday evening and not resume operations until the evening of Sept. 7, following a deep cleaning of the facility and new rounds of testing for all employees. In addition to the eight workers who have died of complications from COVID-19, at least 392 plant employees have tested positive, health officials said, making the outbreak one of the worst in the state.

Outbreaks are ongoing and widespread throughout multiple buildings at the Livingston facility, Merced County officials said. Of about 2,600 workers at the Livingston facility, 13.7% of workers have received a positive test result based on worker self-reporting. Authorities expressed concerns that the outbreak could be much worse, since universal testing of workers has not been completed.

An earlier order issued by the county health officer required the Foster Farms processing plant to close until it was able to reopen safely, but the county delayed enforcement for 48 hours after receiving a call from the U.S. Department of Agriculture. A revised order, made public Saturday, said the plant building would be shut for at least six days starting Tuesday, but parts of the complex that are not experiencing outbreaks can remain open.

Before any employees can return to work in the building, they will need to test negative twice within seven days, according to the county.

“We agree that the best approach to ensuring the future safety of our Livingston plant workers is to begin anew with a clean slate,” Foster Farms said in its statement. “The testing program will ensure that all workers first reentering the plant on Sept. 7 will be free of COVID-19.”

The company said it would continue to work with health officials to improve social distancing and other safety measures at the plant. It noted that the fatal outbreak occurred despite Foster Farms “having promptly implemented a comprehensive set of employee protective measures that strictly adhere to [Centers for Disease Control and Prevention] guidance.”

“We are gratified that 239 of our coworkers have been cleared to return to work and grieve with the families and loved ones of those who died,” the statement said.

Workers have been worried about how the outbreak has been handled and the delays in closing the facility, according to Edward Flores, a sociology professor with the UC Merced Community and Labor Center.

“Where is [the Occupational Safety and Health Administration] in all of this?” Flores said. “The hundreds of cases and the eight deaths constitute an imminent hazard, and that’s grounds for shutting down the facility. Why did it take this many people getting infected and dying, and still, they’re delaying the closing of the plant?”

There also has been criticism of the county’s transparency in managing this outbreak. Earlier this month, when the Los Angeles Times requested an update on the number of cases related to the Foster Farms outbreak, a spokesman said the county was not releasing those numbers “to avoid potentially violating [Health Insurance Portability and Accountability Act] laws.”

Ana Padilla, executive director of the UC Merced Community and Labor Center, said it was disappointing that the county did not immediately shut down the facility after issuing the public health order. The changing and conflicting messages from authorities worried workers and contributed “to an already precarious environment that workers are constantly finding themselves in,” Padilla said.

The Merced County Department of Public Health said that, throughout July, it told Foster Farms that widespread testing was needed to control the outbreak, “particularly within the two departments with the highest number of cases.” In late July, the company tested less than 10% of a department with the largest outbreak within the facility, and more than 25% of the employees tested were positive, according to the county.

“However, expanded testing within the department was not completed for an additional three weeks, and subsequently, three fatalities were linked to that department alone,” the county said. On Aug. 5 and 11, the county issued directives requiring immediate COVID-19 testing of all permanent, volunteer and temporary employees who shared air within a facility that had an outbreak.

A statement issued by the county Thursday said the spread of the highly infectious disease had not been contained, “and active outbreaks continue to exist, posing a significant threat to Foster Farms employees and the surrounding community. Furthermore, testing as required by the health directive had not been completed, and it is unclear whether the temporary workers were included in testing.”

“In view of increasing deaths and uncontrolled COVID-19 cases, the decision was made to order the Livingston plant within the Foster Farms Livingston complex closed until acceptable safety measures are in place,” Sandoval said in a statement. “Our charge is to protect the public’s health, even in the face of difficult decisions.”

Despite the public statement by county officials, Foster Farms employees received emails late Thursday instructing them to show up to work for shifts Thursday night and Friday if they were scheduled to do so.

“All active status employees should report to work for their regular shift tonight or tomorrow as scheduled. The plant and all other facilities on the Livingston complex are safely operating,” said the letter, which was reviewed by The Times. “Please continue to wear your face covering and follow other safe practices at work and outside of work.”

Later Thursday night, Mike North, a spokesman for Merced County, said enforcement of the shutdown order was delayed by 48 hours after the county received a call from the U.S. Department of Agriculture’s undersecretary for food safety.

The delay, North said in an email, would “help facilitate logistics associated with any necessary closure.”

In a statement issued Friday, Foster Farms did not address the shutdown order. The company, which is based in Livingston, has described itself as the West Coast’s leading poultry producer.

The workers at the Livingston plant are predominantly Latino and Punjabi Sikh, said Naindeep Singh, executive director of the Jakara Movement, a Central Valley nonprofit aimed at the Punjabi Sikh community. Many of his group’s members work at the Foster Farms plant.

A Times analysis found that of the 12 California counties with the worst COVID-19 case rates per capita over the last two weeks, eight are in the San Joaquin Valley. Merced County has one of the worst rates statewide, reporting 414 cases per 100,000 residents in the last 14 days. By contrast, L.A. County has about 196 cases per 100,000 residents; Orange County, 156; San Francisco County, 134; and San Diego County, 113.

In its statement Saturday, Foster Farms praised Merced County health officials and said, “COVID-19 is not the product of a company any more than it is the fault of a people or a community. It is a scourge that companies like Foster Farms and communities like Merced County can work together to defeat.”