An alleged officer of the Federal Road Safety Corps, was reportedly arrested after eating snacks from a store and refused to pay. 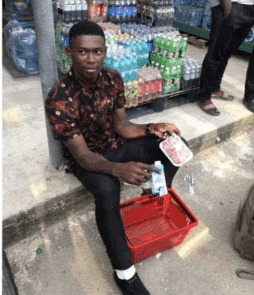 According to the Twitter user, @Kene Ozoekwe who shared the story on the platform, the officer ate snacks from the store and refused to pay, under the guise of being a security personnel.

“So at about 13:32, this fella walked into my store and went to the fridge to grab a drink and started drinking, then he took a 2nd one and went to the chiller and brought out minced meat (which was raw FYI) and started eating it. Then my staff approached him and told him that he had to pay first before consuming anything in the store, besides the meat he was eating was raw! ”

“The lady said when she asked the officer who he was, the man revealed he was a security personnel and he was very hungry. Then he promised to pay for the items and walked to the check out point and proceeded to harass 2 little girls in the presence of their mum.

“That was when I was beaconed on by the lady and my staff to come and help out. First thing the fella said was ‘I am a security personnel’ which of cause triggered my rage and I asked him to follow me out of the building so we could have a “talk”. Then he proceeded to tell me.

“That he was a Federal Road Safety Corps personnel @FRSCNigeria and he was hungry and didn’t have money on him, that was why he did what he did! Omo na were I craze for the guy be that!”

“The lady added that she later handed the FRSC Officer over to the police while lamenting that her the officer owe her N1700. You dey hungry you no even see biscuit #20 bucks chop, na peak yogurt & raw meat you chop

“So the cops came and I narrated the ordeal to them and they took him away before I could. 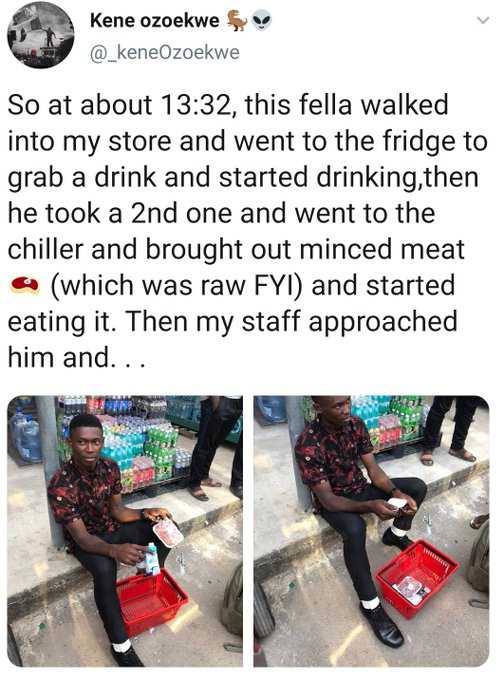 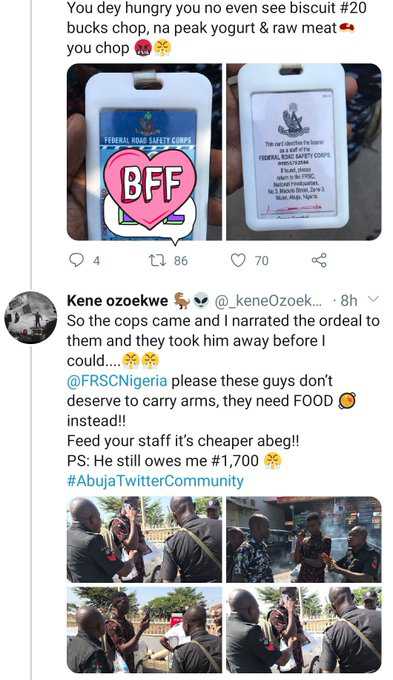