German police forcibly removed far-right protesters and others who stormed the parliament building in Berlin following a protest against the country’s strict coronavirus restrictions.

Police dispersed the protesters after they broke away from a large peaceful demonstration, breached a security barrier and then ran up the steps of the Reichstag late Saturday, according to reports.

The breach involved hundreds of people, some waving the flag of the German Reich of 1871-1918 and other far-right banners. 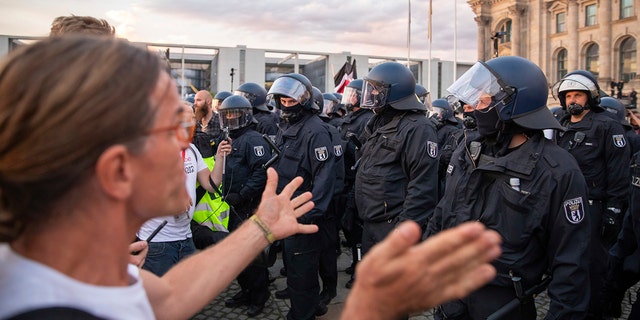 Police officers push away a crowd of demonstrators from the square ‘Platz der Republik’ in front of the Reichstag building during a demonstration against the Corona measures in Berlin, Germany, Saturday, Aug. 29, 2020. (Christoph Soeder/dpa via AP)

“Reich flags and right-wing extremist provocations in front of the German Bundestag are an unbearable attack on the heart of our democracy,” Germany’s president, Frank-Walter Steinmeier, said Sunday. “We will never accept this.”

Robert Habeck, the co-leader of Germany’s Green party, called for a thorough investigation into the incident.

“The fact that Nazis with imperial war flags try to storm the Bundestag recalls the darkest period in German history,” he told the Funke media group.

Scuffles broke out as police drove back the demonstrators with pepper spray. 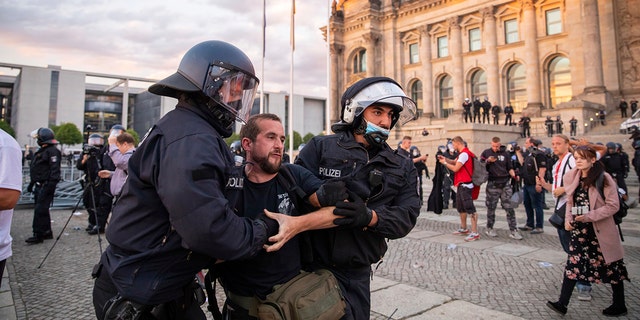 Police officers push away a crowd of demonstrators from the square ‘Platz der Republik’ in front of the Reichstag building during a demonstration against the Corona measures in Berlin, Germany, Saturday, Aug. 29, 2020. (Christoph Soeder/dpa via AP)

Steinmeier said people had the right to express their anger about the coronavirus restrictions and to question them publicly, including with demonstrations.

FRANCE, GERMANY CRITICIZE US FOR TRYING TO LEAD WHO DISCUSSIONS DESPITE WITHDRAWAL

“My sympathy ends where protesters allow themselves to be used by enemies of democracy and political agitators,” he added.

About 300 people were arrested in front of the Reichstag and following an incident at the Russian Embassy, according to police.

German officials condemned those who stormed the building.

The protest had originally been banned, but a court eventually allowed it to go ahead on condition that protesters abided by coronavirus measures such as mask-wearing and social-distancing, the BBC reported.