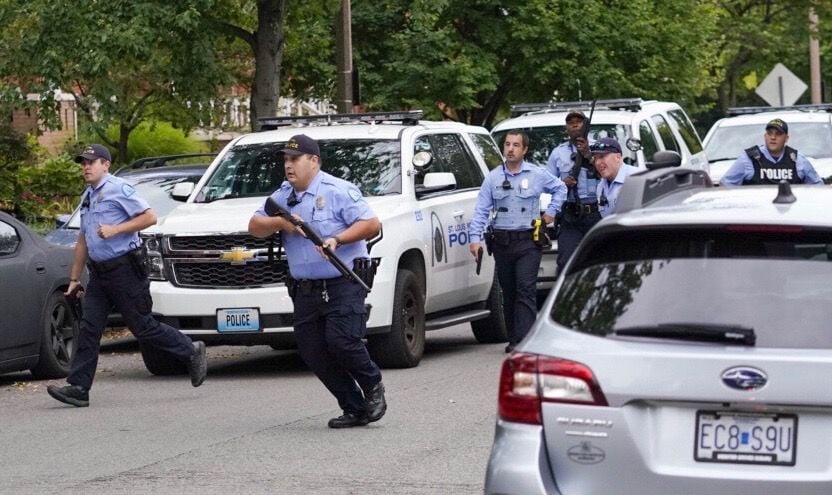 St. Louis Metropolitan police officers arrive on the scene after two SLMPD officers were shot around 5:45 p.m. Saturday, Aug. 29, 2020, in the 3700 block of Hartford in south St. Louis. This is near Tower Grove Park. Both officers have been transported to a hospital, but no word on their conditions. Photo by Matt Miller 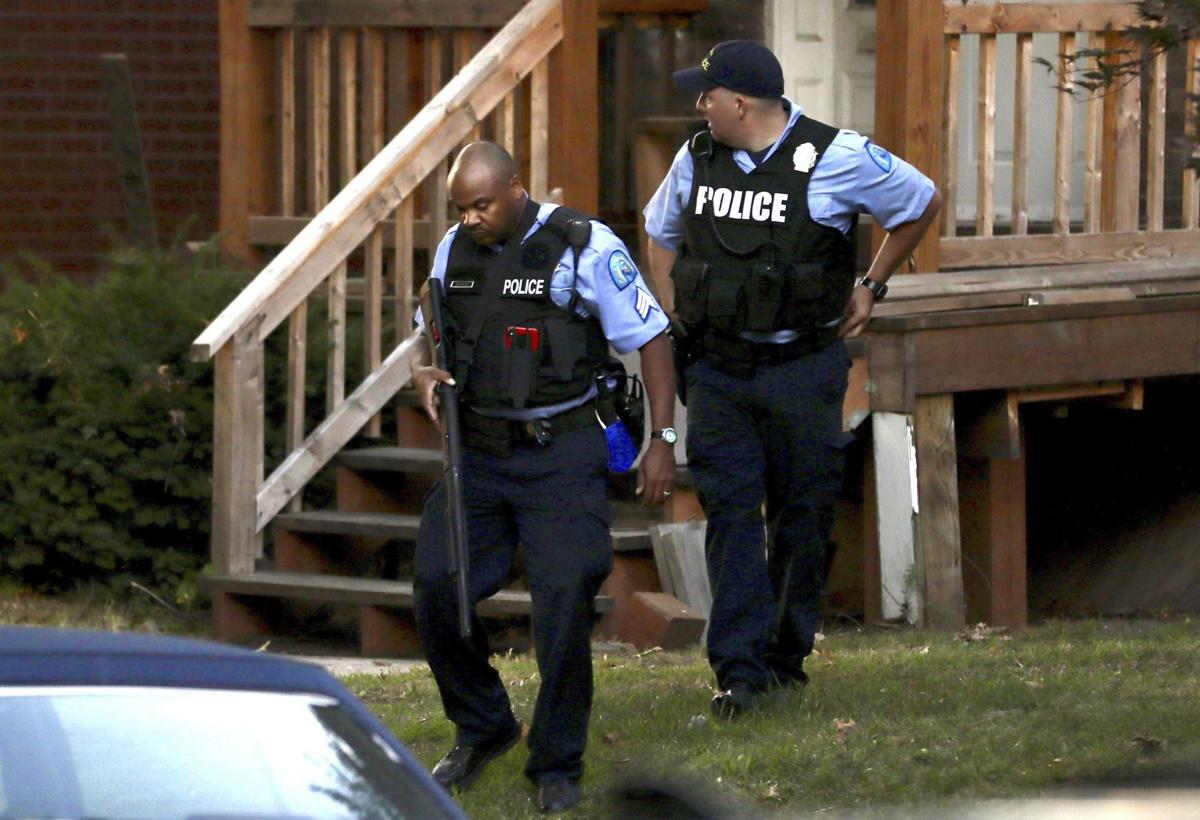 St. Louis Metropolitan police investigate the scene after two SLMPD officers were shot around 5:45 p.m. Saturday, Aug. 29, 2020, in the 3700 block of Hartford in south St. Louis. This is near Tower Grove Park. Both officers have been transported to a hospital, but no word on their conditions. Photo by David Carson, dcarson@post-dispatch.com 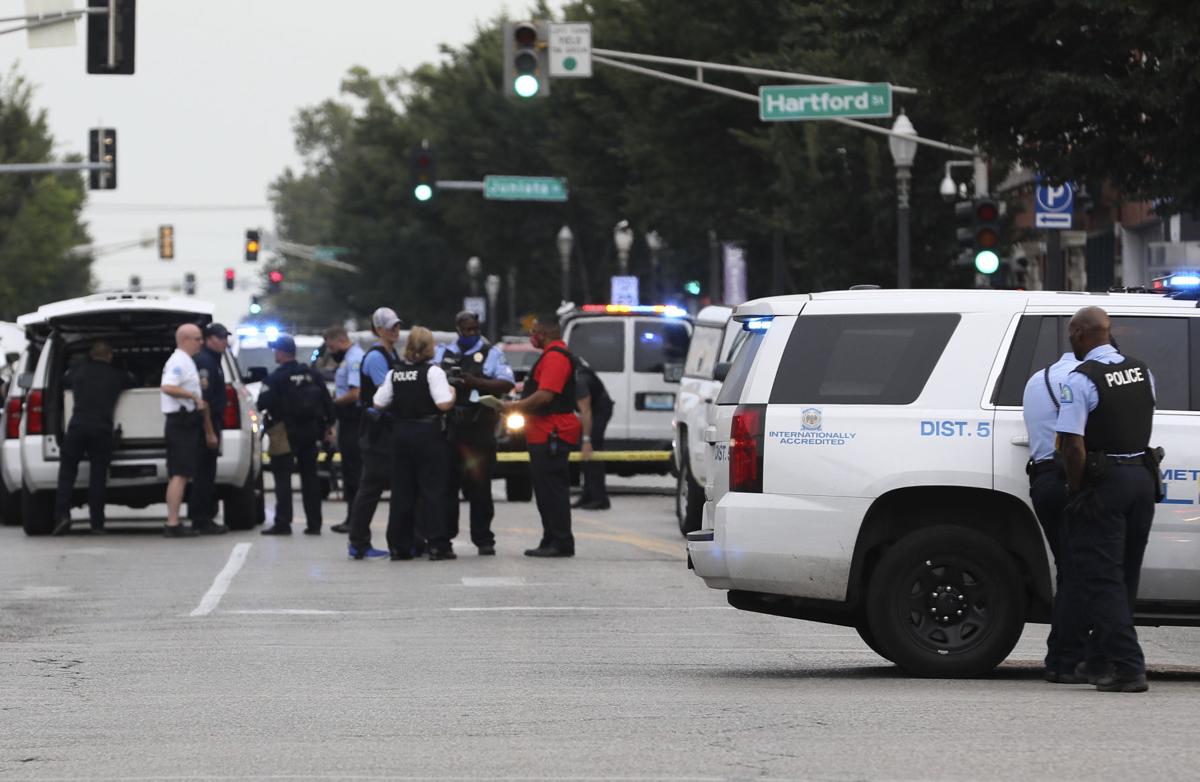 Two officers from the St. Louis Metropolitan Police Department were shot around 5:45 p.m. Saturday, Aug. 29, 2020, in the 3700 block of Hartford in south St. Louis. This is near Tower Grove Park. Both officers have been transported to area hospitals. Photo by David Carson, dcarson@post-dispatch.com 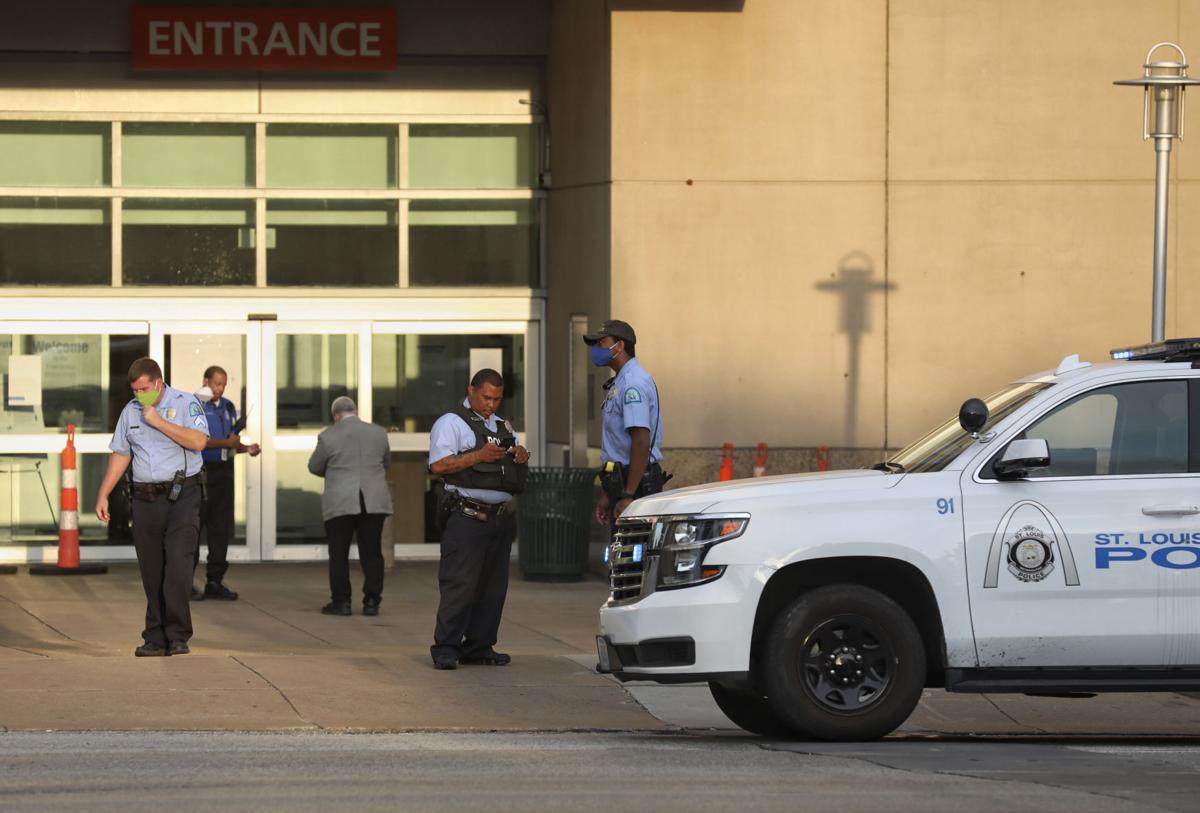 Police gather outside the Barnes-Jewish Hospital emergency entrance on Saturday, Aug. 29, 2020, after two officers from the St. Louis Metropolitan Police Department were shot around 5:45 p.m. in the 3700 block of Hartford in south St. Louis. This is near Tower Grove Park. Officials have not released details on the officers conditions. Photo by Colter Peterson, cpeterson@post-dispatch.com 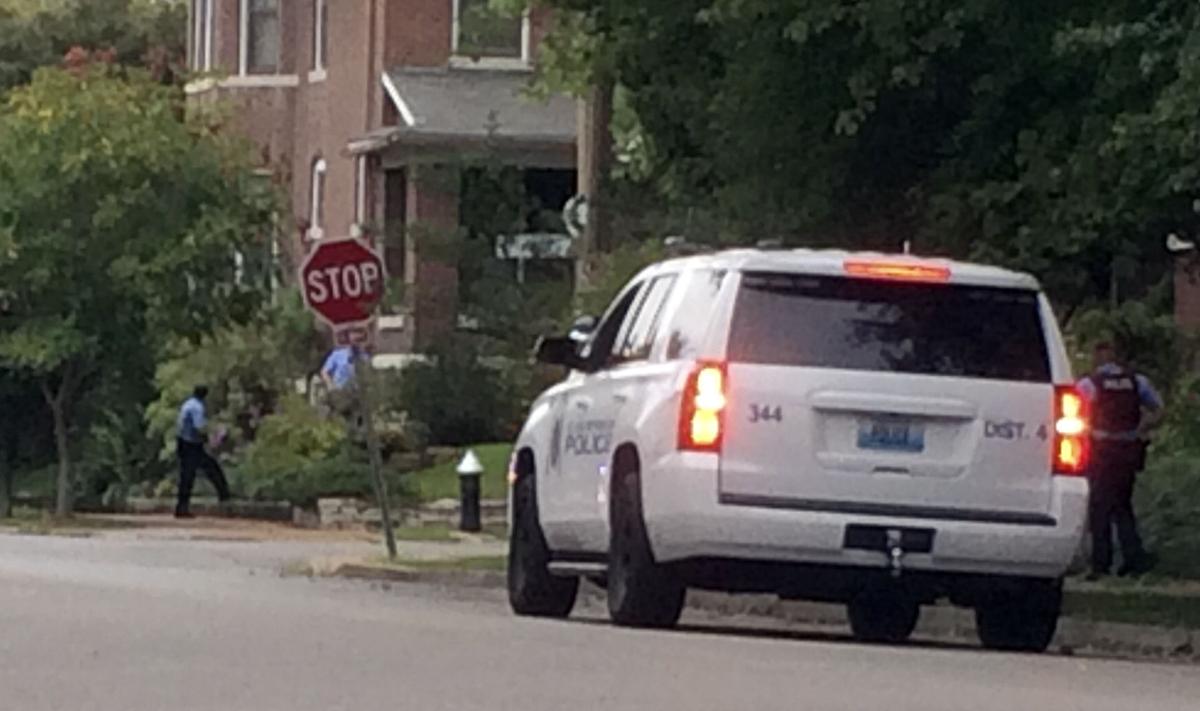 Police officers at the scene on Saturday, Aug. 29, 2020, where two St. Louis officers were shot. Photo by Tod Robberson of the Post-Dispatch 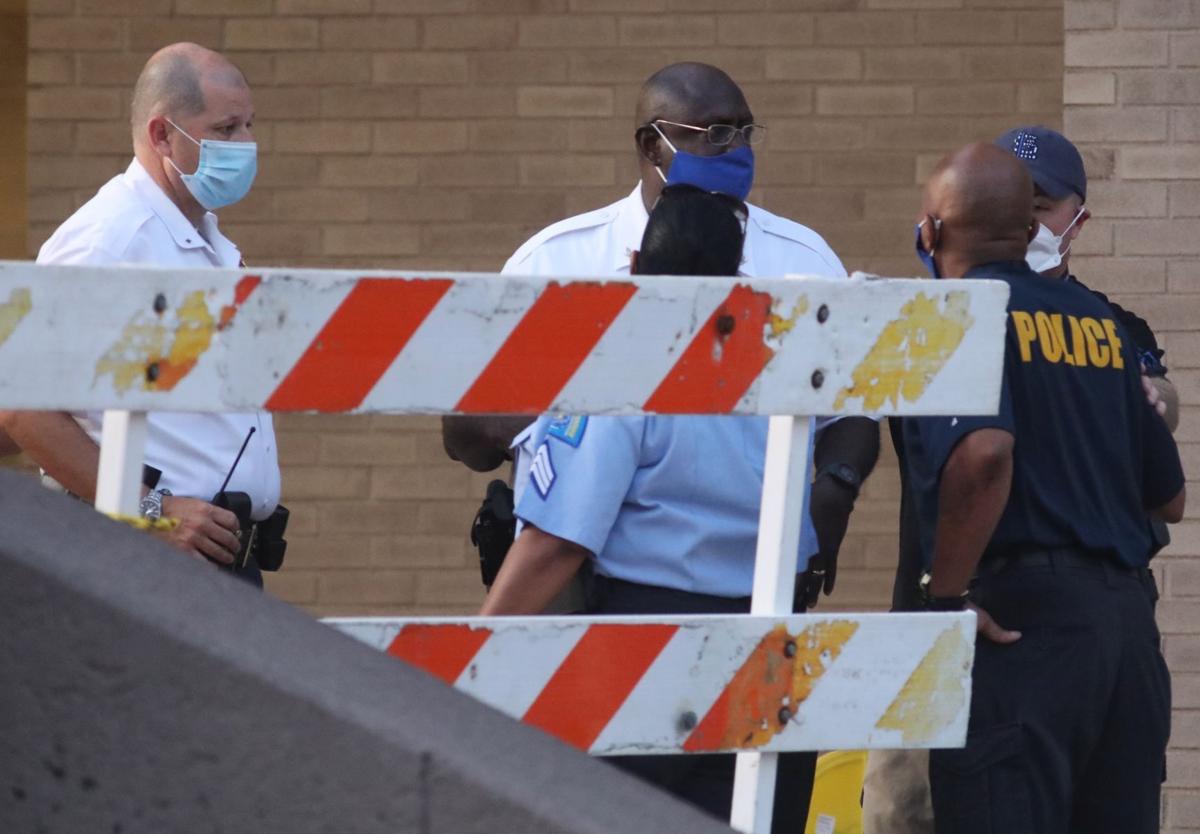 St. Louis Police Chief John Hayden is briefed outside St. Louis University Hospital Emergency-Trauma Center after two officers were shot in the Tower Grove South neighborhood while responding to a call on Saturday, Aug. 29, 2020. Both officers were transported by police to area hospitals. One officer is in “very critical” condition with a head wound and the other officer suffered a gunshot wound to the leg. The officers mark the seventh and eighth officers shot this year. Photo by Colter Peterson, cpeterson@post-dispatch.com 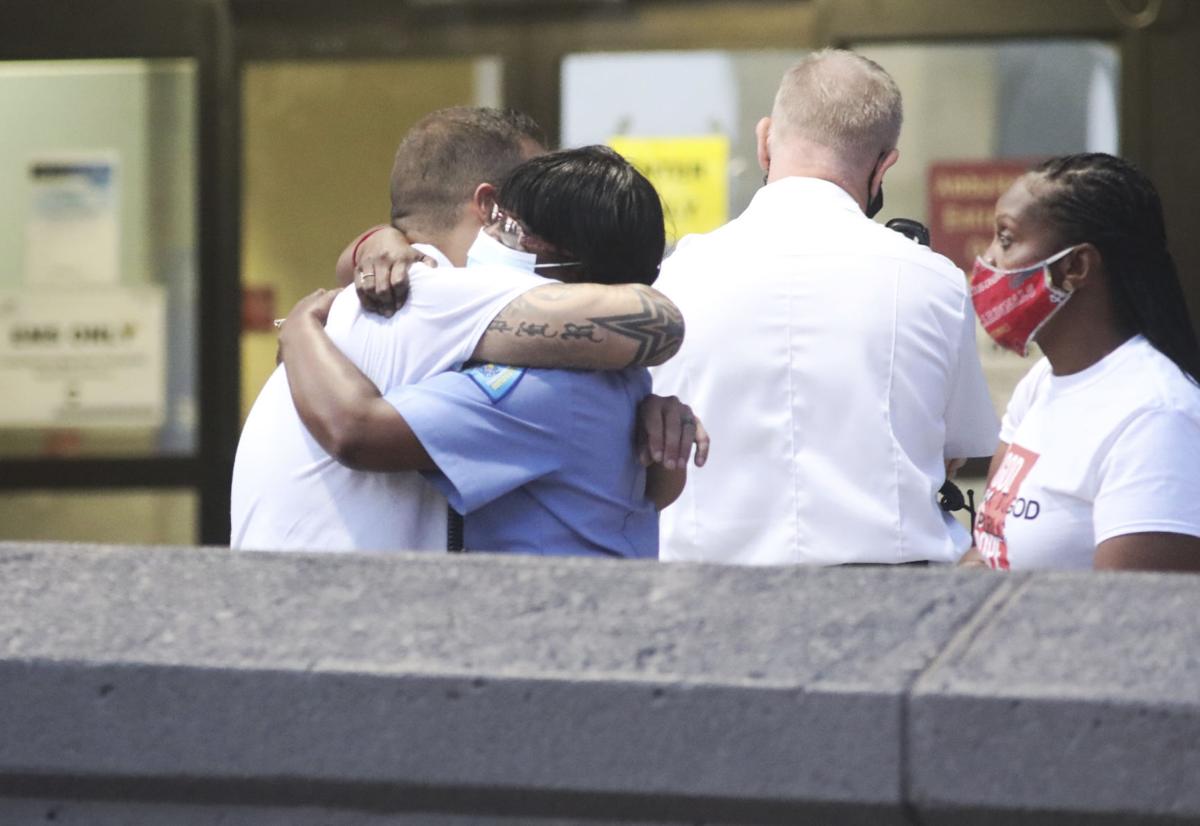 Officers with the St. Louis Metropolitan Police department embrace outside the St. Louis University Hospital Emergency-Trauma Center on Saturday, August 29, 2020 after two SLMPD officers were shot in south St. Louis Saturday evening in the 3700 block of Hartford around 5:45 p.m. This is near Tower Grove Park.  Photo by Colter Peterson, cpeterson@post-dispatch.com 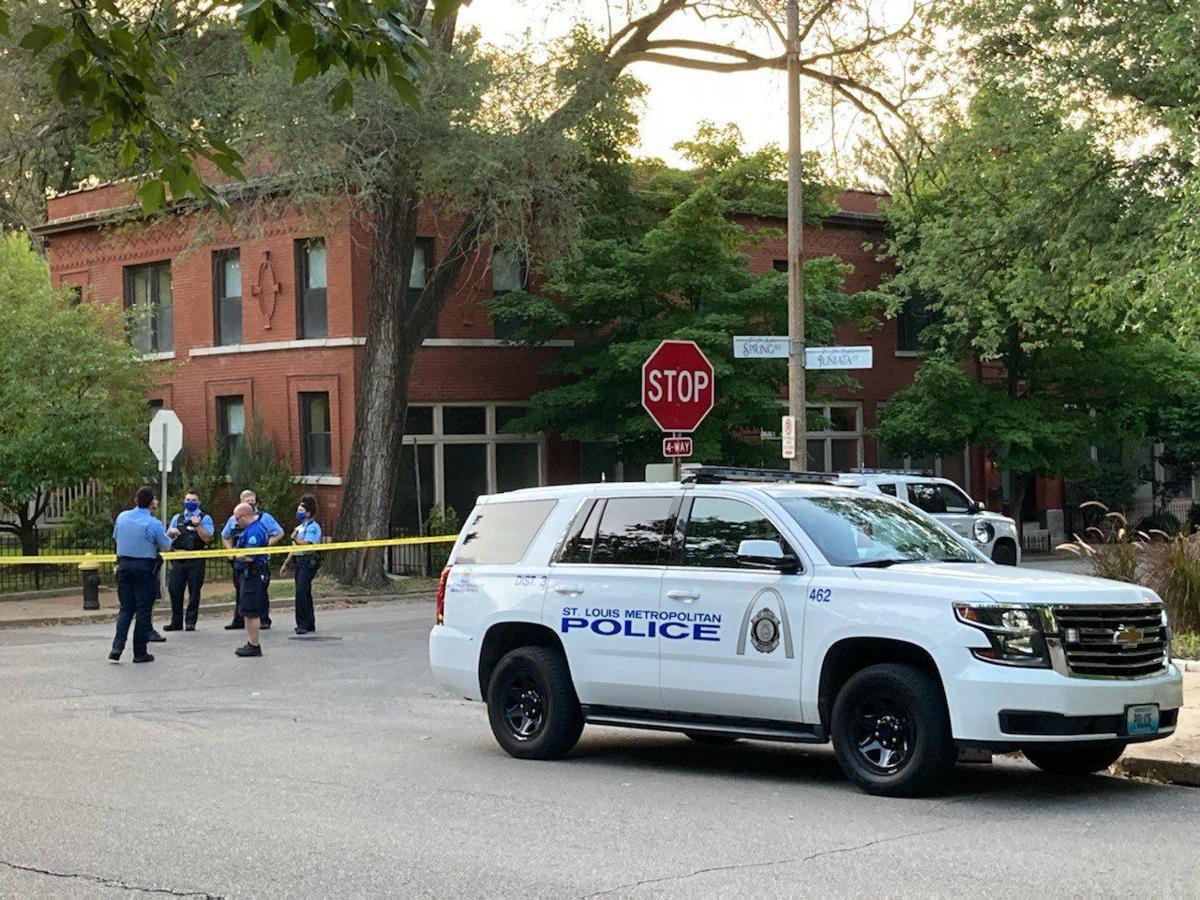 St. Louis police establish a cordon on Saturday, aug. 29, 2020 at the intersection of Spring and Juniata in Tower Grove South as an active shooter kept police and a SWAT team at bay one block away on Hartford St. and Spring. Two police officers were shot. Photo by Tod Robberson

Mimi and Steve Haag pose in front of their home in the 3700 block of Hartford Street the day after a gunman who shot two police officers barricaded himself inside. Photo by Erin Heffernan of the Post-Dispatch.

ST. LOUIS — Tower Grove South homeowners Steve and Mimi Haag are grateful to be alive after a gunman barged into their home Saturday evening, shot two responding St. Louis police officers through a window and barricaded himself inside their house for nearly 12 hours overnight.

“God protected us,” said Steve Haag who was in his home in the 3700 block of Hartford Street with his wife Mimi just before 6 p.m. Saturday waiting for a friend to join them for dinner.

The couple was plunged into the violent series of events when a transient man who frequents the neighborhood told Mimi he had been shot and asked her to call 911. As she spoke to dispatchers, her husband saw another man come to their front door, let himself in and refused to leave.

“I saw then he had a gun,” said Steve Haag. “He was very calm standing there with it in his hand and he just says to Mimi: ‘Ma’am you need to get off the phone.'”

The couple quickly walked out of their backdoor and into an alley and soon saw police officers arrive.

Steve Haag said he was standing about a block away from his home when the man shot responding St. Louis police officers as they approached the house. He said he heard a loud pop and saw one officer motionless on the sidewalk with a gunshot wound.

When another officer ran to give the injured officer aide, he was also shot in the leg, according to Haag and St. Louis police.

The first injured officer was shot in the head and rushed to a hospital where he was listed in critical condition Saturday, according to St. Louis police. That officer remained hospitalized at SSM St. Louis University Hospital Sunday morning in “grave condition,” police said. He is 29 years old and has been with the department for nearly 4 years.

The other officer was released from a hospital, police said Sunday. He is 30 and has been with the department for less than a year.

Steve Haag said it appears the gunman shot the officers who were on a sidewalk from a second-story window in their home.

Haag said the man was dressed normally and had a mohawk hairstyle. He barricaded himself in the house in a standoff with dozens of police officers until officers were able to take him into custody around 5:30 a.m. Sunday. Police did not immediatly say Sunday how he was taken into custody, but said that no officers fired shots.

During the standoff, multiple streets were closed, residents on Hartford were warned to shelter inside and SWAT officers swarmed the neighborhood. Police also put SUVs and officers armed with rifles around the residence where the suspect had retreated.

While inside the house, the gunman cut himself leaving blood splatters in the home, said Steve Haag after going inside to grab a few items despite lingering tear gas inside the residence Sunday morning. Several windows on the home were also broken from tear gar cannisters that were shot inside by police.

Police said the suspect was taken to hospital with injuries, but was released back into police custody Sunday morning. He has not yet been publicly identified.

Police Chief John Hayden told reporters Saturday that police had not found another shooting victim besides the two police officers anywhere around the scene.

The officers were “trying to do their job, that’s all they’re trying to do and they’re suffering under gunfire,” the chief said. Hayden said the incidents are part of “a surge in violence” this summer and asked residents to pray for the officers.

Chief Hayden said the shootings mark the seventh and eighth officers shot in the line of duty in the city since June 1.

Then on July 26, a man driving by a gas station fired at officers and riddled a police car with bullet holes at the Crown Mart gas station at 1515 North 13th Street. One officer suffered a shrapnel wound to the elbow.

The officer was shot in the arm near Convention Plaza and North 10th Street, and was expected to make a full recovery.

In additon to the officers who have been shot, on July 20 an off-duty St. Louis officer exchanged shots with a teenager who tried to carjack him. The officer was working a secondary job as security for Kutis funeral home in the city, in the 2900 block of Gravois Avenue.

Steve Haag, the homeowner who escaped shortly before the officers were shot Saturday, said their brings his attention to the sacrifice police officers make in the line of duty and hopes the city will support the department.

“I come from a law enforcement family,” he said. “And I know these officers were here to protect us, and now one is still fighting for his life because of it. I am so grateful for what they did.”

Shake off your afternoon slump with the oft-shared and offbeat news of the day, hand-brewed by our online news editor, Mandy St. Amand.