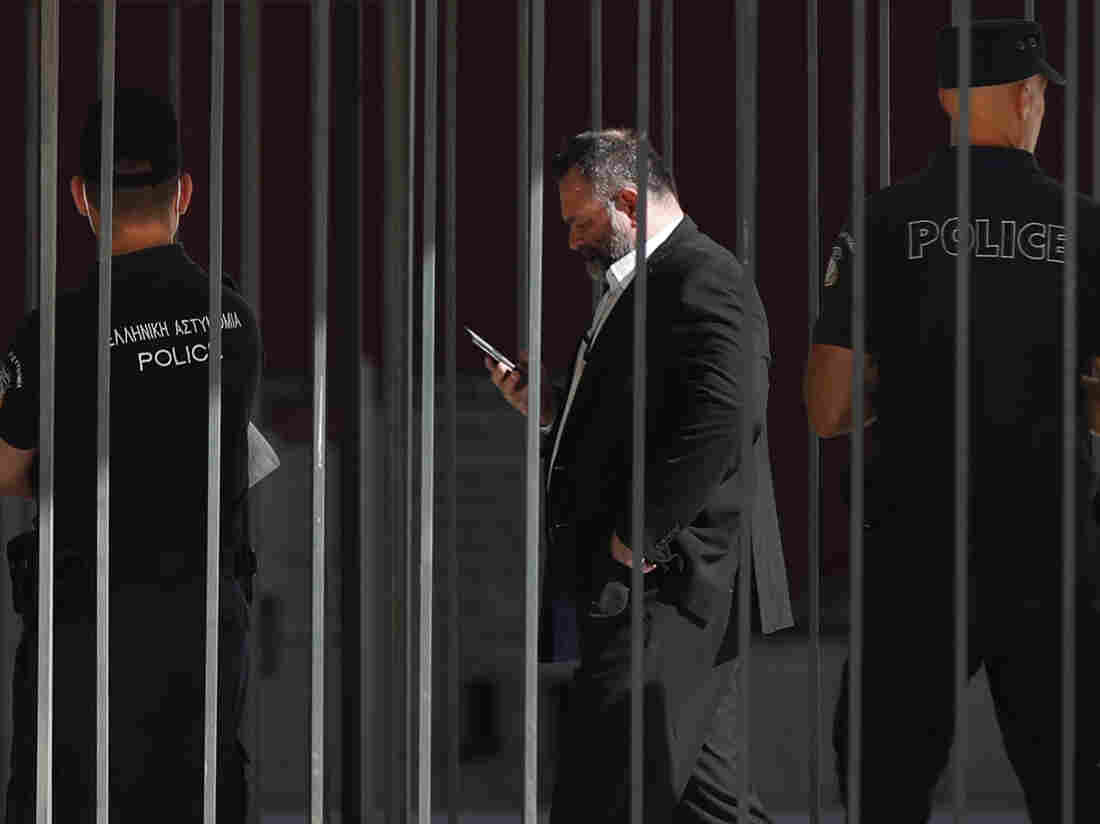 A Greek court has sentenced Nikos Michaloliakos and another former Golden Dawn leader, Ioannis Lagos (seen here), to 13 years in prison, after finding the party to be a criminal organization. Thanassis Stavrakis/AP hide caption 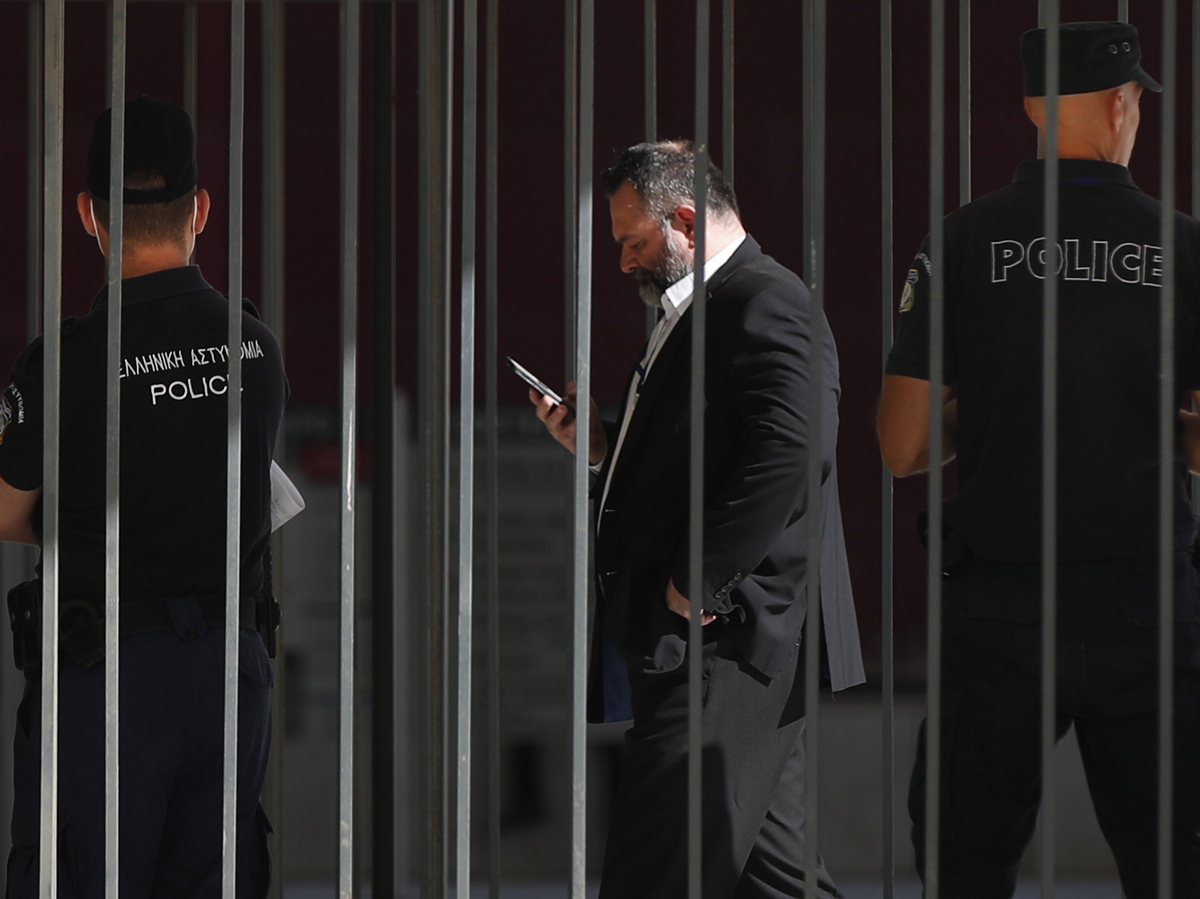 A Greek court has sentenced Nikos Michaloliakos and another former Golden Dawn leader, Ioannis Lagos (seen here), to 13 years in prison, after finding the party to be a criminal organization.

A Greek court has sentenced Nikos Michaloliakos, the leader of the far right anti-immigrant Golden Dawn party, to 13 years in prison. Michaloliakos and others from Golden Dawn were found guilty last week of being part of a criminal organization that ordered or encouraged violence.

Other leaders received sentences ranging from five to 13 years on Wednesday. The court will decide soon if any of the sentences will be suspended.

The five-year trial put new scrutiny on one of Greece’s ugliest modern political developments — how a violent neo-Nazi party, infamous for harboring racists, xenophobes and even Holocaust deniers, was able to mobilize enough public support to win seats in parliament between 2012-2019 in a country that suffered tremendously under Nazis occupation during World War II.

“We hope to never again see in our homeland, those who proponent ideologies that bloodied the world,” Greek President Katerina Sakellaropoulou tweeted Monday, as she marked the 76th-year anniversary of Athens’ liberation from German occupation.

One party member, Giorgos Roupakias, received a life sentence plus 10 years after being convicted of the 2013 murder of Greek rapper Pavlos Fyssas, an anti-fascist musician who performed under the stage name Killah P.

It was Fyssas’ mother, Magda, who pushed for the criminal inquiry to expose Golden Dawn as a criminal gang and jail its leadership. She attended the entire five-year trial, bonding with another grieving parent, Khadam Hussein Luqman, the father of Pakistani immigrant Shehzad Luqman, whom two Golden Dawn members stabbed to death in January 2013. The two men were later convicted.

Other charges centered on a violent attack on Egyptian fishermen – part of the party’s campaign against migrants.

Dozens of Golden Dawn members were found guilty of murder, attempted murder, or other crimes last week — a landmark ruling that cheered anti-fascist activists in Greece. The verdict was “a confirmation that democracy and its institutions are always capable of fending off any attempt to undermine them,” Sakellaropoulou said.

Those convicted include former party spokesman Ilias Kasidiaris, who once slapped a female politician on live TV and has founded a new party, Greeks for the Fatherland, which shares similar views with Golden Dawn.

Another former leader, Ioannis Lagos, who is serving in the European Parliament as an independent, was also sentenced to 13 years. He told the judges earlier this week that the court had come under “pressure from the political establishment” to punish Golden Dawn.

It has been a sharp fall for Michaloliakos, a former army commando who has compared himself to Julius Caesar, and for his party, whose members portray themselves as victims of political persecution. Party loyalists say they’re patriots. In 2016, they endorsed Donald Trump during his presidential run because they said he promotes “clean ethnic states.”

Michaloliakos tweeted last week that he and his deputies were “condemned over our ideas.” He also said Greece will remember Golden Dawn “when illegal immigrants are the majority in Greece, when [the government] hands over earth and water to Turkey, when millions of Greeks are unemployed on the street.” Twitter has since suspended his account.

The long criminal trial has choked the life out of Golden Dawn. With its brutality on full display, the group lost public support and was so broke it could no longer pay rent for its Athens offices. Infighting prompted resignations and defections. But rights groups and political analysts warn that its ultra-nationalist ideology lives on in other parties and institutions.

Golden Dawn started as a fringe group in the 1980s, but it rose to new prominence by channeling public anger over Greece’s dire economic struggles of the past decade. Its rise was a shock to many Greeks, who were alarmed by the party’s virulent anti-immigrant stance and slogans such as “Blood, Honor, Golden Dawn!”

In last year’s elections, Golden Dawn did not win enough votes to earn a single seat in parliament.