A Republican congressional candidate and ally of President Donald Trump stormed away from a video interview after being asked about her apparent support for QAnon.

Angela Stanton King, who is vying for late civil rights icon John Lewis’ old seat in Georgia, appeared to confirm that she believes the theory pushed by the far-right movement that furniture company Wayfair was advertising trafficked children under the guise of selling expensive items, before walking away from her interview with The Guardian.

During the interview, Staton King is asked about her “sympathizing” with the conspiracy theory which believes Trump is waging a secret war against the “deep state” and Democrats are involved in a Satan-worshipping pedophile ring.

Guardian reporter Oliver Laughland then shows the candidate printed out tweets from King’s account which appear to show her support for the conspiracy theory.

“TRUTH BOMB. This isn’t about COVID 19 or BLACK LIVES MATTER. This is a major cover up for PEDOPHILIA and HUMAN TRAFFICKING,” one reads.

“That has nothing to do with QAnon” Kind responds. “I don’t think it needs any explanation.”

Another tweet asked if Ghislaine Maxwell, the girlfriend of late billionaire and child sex offender Jeffery Epstein, “tip authorities off” about Wayfair.

When asked what she meant by that, King replies: “Exactly what I said. What’s the next one?”

As Laughland starts to ask if she believes that a high-end furniture company are secretly trafficking children, King states “We done, let’s go.”

When asked again if the retailer was involved in a global pedophilia conspiracy, she replied: “You know they are. You saw it. You watch the news just like I did.”

‘We’re done, let’s go’: QAnon-believing Republican candidate walks out of Guardian interview after facing questions about her support for the baseless conspiracy theory.

Click ‘watch now’ for the full episode of Anywhere but Washington pic.twitter.com/riEKgXSG7D

King, who is the goddaughter of Alveda King, niece of Martin Luther King Jr, was pardoned by Trump earlier this year after she spent two years in prison for her role in a 2004 car theft conspiracy.

She is one of a number of people accused of being a QAnon supporter who are running for Congress.

In the past, she has also tweeted “The storm is here”—an alleged reference to a belief from QAnon supporters of the moment that Trump will start taking down the “deep state.”

When asked by The Guardian about the tweet from August, King denied it had anything to do with QAnon, adding. “It was raining that day.” The Guardian notes it was hot with no precipitation on the day she sent the tweet in her hometown of Atlanta.

On August 5, Stanton-King also made reference to the Pizzagate conspiracy theory.

Pizzagate, which has links to QAnon, falsely alleged influential Democrats, including Hillary Clinton, were connected to a child sex ring linked to a pizza restaurant in Washington, D.C.

The interview was conducted before Trump failed to denounce QAnon during NBC’s Town Hall event. 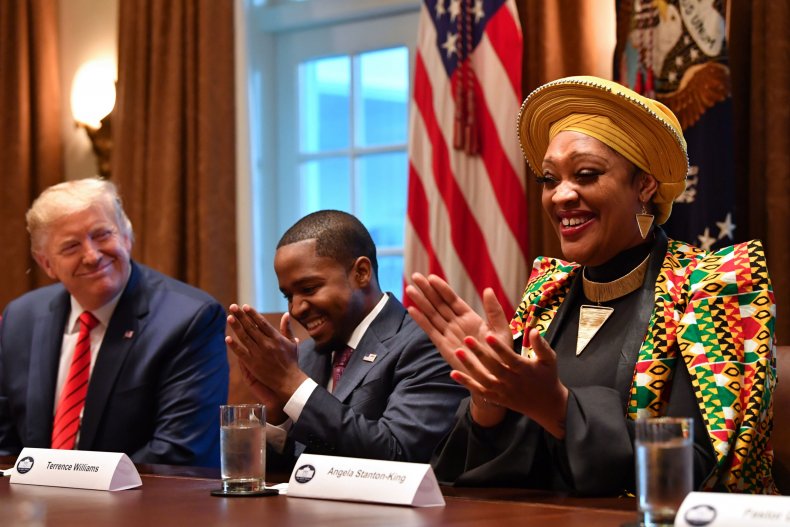 President Donald Trump (L) sits next to Terrence Williams and Angela Stanton-King (R) during a meeting with African-American leaders in the Cabinet Room of the White House in Washington, DC, on February 27, 2020. King admitted to believing a baseless QAnon-related conspiracy theory as she stormed off an interview. NICHOLAS KAMM/AFP/Getty
Share this...