Gov. Phil Murphy and staffer who has COVID-19 had masks off while outdoor dining at Hoboken bar, he says – NJ.com

Gov. Phil Murphy wasn’t wearing a mask when he came into contact with a senior staffer who has tested positive for the coronavirus Saturday night while they were together at an outdoor area of a Hoboken bar with about a half-dozen others, the governor said Thursday.

Murphy, who continues to show no symptoms, left a public event on Wednesday and went into self-quarantine after learning that staffer, Deputy Chief of Staff Mike Delamater, has COVID-19. Murphy took a test that afternoon that was negative, his second negative test this week, but intends to self-quarantine at least until Monday with two more follow up tests Saturday and Monday, he said during a radio interview with 1010 WINS Thursday morning.

He described the visit to Pilsener Haus & Biergarten in Hoboken on Saturday as a “social engagement with a handful of our close friends and colleagues.” The gathering included First Lady Tammy Murphy, who also tested negative on Wednesday and remains in self-quarantine.

Masks were only removed while the group was seated and dining, which is permitted under the state’s restaurant restrictions, Murphy said.

“We, ourselves, took them off,” Murphy said. “Obviously you can’t eat or drink through a mask so honestly I have to say when people were moving around, and that’s when you really want to make sure you know you’re not sitting with your own little bubble but you’re moving around in your inner mingling with folks who are not part of your family or close friends. Folks were wearing masks at least to the best of my recollection. But at the table, you’re having a drink, you’re eating something, by definition, you’re taking your mask off.”

While the Murphys were at the restaurant for more than an hour, Delameter joined the gathering for about the last 15 minutes and was not directly next to the governor.

“I was not really right up against this person,” Murphy told 1010 WINS. “It was at most 15 minutes and it was outdoors.” 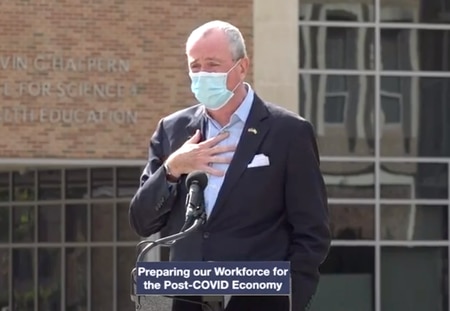 Gov. Phil Murphy abruptly left a public event at Camden County College on Wednesday after learning he was in contact Saturday with someone who tested positive for the coronavirus.

Delamater is one of two senior administration staffers who tested positive Wednesday for the virus. Dan Bryan, senior adviser for strategic communications, learned of his diagnosis hours after he told Murphy learned Delamater was positive.

As a result, much of the governor’s staff is working remotely and Murphy’s coronavirus updating briefing will be conducted virtually at 1 p.m., rather than in-person in Trenton.

“Our entire front office is working from home now,” Murphy said. Contact tracing efforts are underway and those with extended exposure to either staffer are being quarantined for 14 days, he said.

Bryan is a close adviser to the governor and has accompanied him to public events and interviews in recent days. He was with the governor in Trenton for his regular COVID-19 briefing Monday and later that evening in Asbury Park when Murphy’s Ask the Governor program aired on News 12 New Jersey.

Bryan was also with the governor Tuesday when Murphy announced his pick for education commissioner. The governor held a question-and-answer session with reporters after the outdoor announcement. The governor did not wear a mask while he fielded questions for about seven minutes. Bryan stood among the nearly dozen reporters during the question session.

Murphy, who had surgery to remove a cancerous tumor from one of his kidneys in March, says he continues to feel fine.

“I feel like a million bucks,” he said, adding he’s not taking any medication in response to learning of his staffers’ positive tests.

As a precaution, however, he’s been keeping his distance from two of his children who are currently at the family’s Middletown home.

“Frankly, we don’t go near each other,” Murphy said. “We have a lot of windows open, we eat outside whenever we can and we wear masks if we are in close contact.”

Our journalism needs your support. Please subscribe today to NJ.com

Matt Arco may be reached at marco@njadvancemedia.com.