Graciousness, attention to detail a way of life for Bill Mattison

Thanks for reading! Log in to continue.
Enjoy more articles by logging in or creating a free account. No credit card required.
{{featured_button_text}} 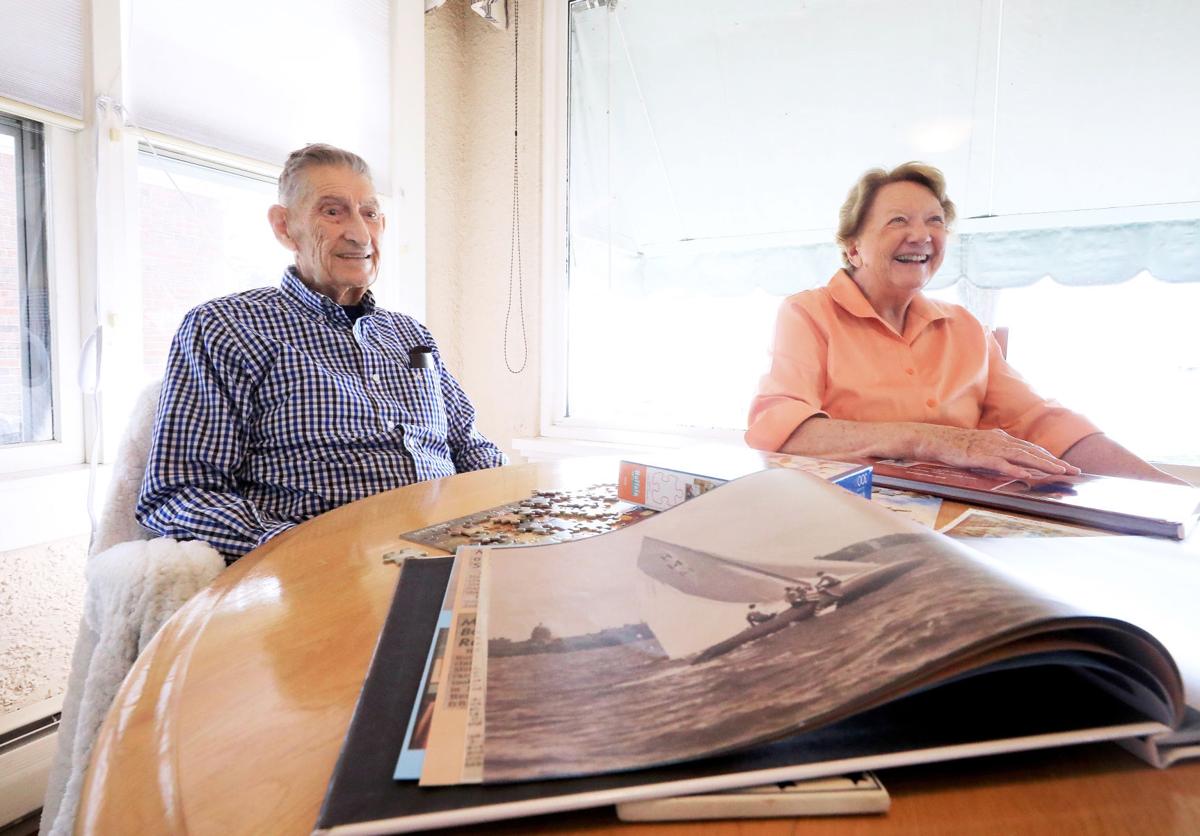 Bill Mattison, 92, for years considered the fastest iceboater in the world, was inducted Sept. 12 into the National Sailing Hall of Fame. He has had a supportive partner in his wife of 63 years, Mauretta Mattison. 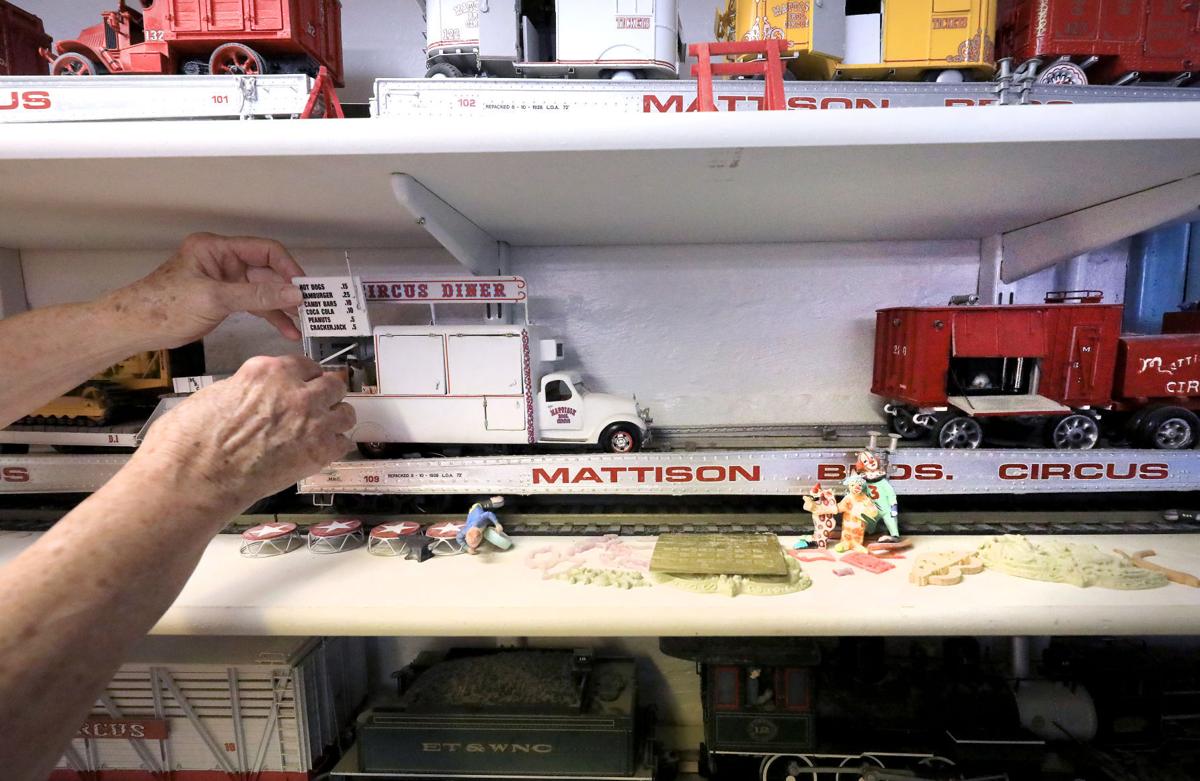 Elements of Bill Mattison’s “Mattison Family Circus” creation are displayed at his Madison home, including a detailed dining car that even includes the prices of food. Hot dogs are 15 cents, hamburgers 25 cents and peanuts a nickel.

Idle is a rarely used gear for Bill Mattison.

The proof can be seen in the intricacies of miniature circus wagons that line the living-room shelves of his Madison home.

The wooden wagons, modeled after those at Circus World Museum in Baraboo, sport working brakes, tiny hinges and detailed paint jobs. One has a working steam calliope and another a series of thimble-sized cast iron bells tuned to specific pitches.

His neatly organized basement workshop is filled with small grinders, a micro-sander, lathes and tiny clamps. This is also where his home-built circus train is displayed near plywood tables that hold three circus tents in miniature, all of which earned him a spot in 2015 in the Circus Model Builders Association’s Hall of Fame.

Bill Mattison ran away to join the circus in 1941. And while his career is heralded for sailing, he also makes museum-quality models of circus wagons, some of which are on display in his Madison home.

And then there are the two model ships. They’re located on on the second floor, built from kits ordered from Italy and based on designs from 1670 and 1765, respectively. Each took Mattison 10 years to build.

“Bill’s always busy,” said Mauretta Mattison, his wife of 63 years, for whom he built a grandfather clock that sits at the base of the stairs just off the kitchen. “He never was able to sit still.”

Details are important to Bill Mattison, which is why he spent 10 years building this replica of a ship from the 1700s.

So when we arrived Thursday afternoon to talk about Bill Mattison’s latest accomplishment, a spot in the National Sailing Hall of Fame, he was set up in his four-season sunroom that offers up sweeping views of Lake Mendota. Mattison, who turned 92 last month, was busy with a 300-piece jigsaw puzzle. As he worked, we talked about sailing, a hobby since he was a pre-teen growing up on Orton Court near Lake Monona.

The curiosity for speed, wind and sails became a passion and turned into an obsession. But through the decades, Mattison maintained his kindness and willingness to help others and continued to innovate. He was part of America’s Cup teams in 1987, 1992 and 1995, but didn’t sail in those events. Instead, he was part of the shore crew charged with repairing and tweaking the watercraft. His efforts helped win the race in 1992 with his longtime friend and Wisconsin sailing legend Buddy Melges. Over Mattison’s more than 75-year sailing career, he won 26 international and national championships and scores of other regattas.

Whether it was summer or winter, Mattison could be found either in his Williamson Street boat shop or on the water, be it filled with waves or covered in slick ice that could help his custom designed and built iceboats be propelled like a rocket across lakes like Mendota, Monona and Geneva.

“Even though he won, he shared not only his knowledge, he shared by helping a fellow competitor who wouldn’t have made that next race if not for Bill Mattison,” Melges said in 2014. “And even at a regatta, a guy could be his most fierce competitor and Bill’s helping him get back on the ice after a breakdown. That’s the kinda guy he was, or is.”

Bill Mattison built 14 “Honeybucket” iceboats that at one time were some of the fastest in the world. In 1964, Mattison won the national Triple Crown Trophy for iceboating and even appeared in Time magazine. This photo of Mattison is displayed in his bedroom near other sailing mementos.

A Hall of Famer

Based in Newport, Rhode Island, the National Sailing Hall of Fame is dedicated to preserving the history of sailing, chronicling its impact on American culture, recognizing those who have made substantial contributions to the sport and encouraging sailing development and participation.

Because of COVID-19, this year’s induction ceremony was held online on Sept. 12 and included nine people who have impacted sailing in their own way. The included painter James Buttersworth; New Jersey native Gordon “Sandy” Douglass, who was a racer, designer and builder of sailing dinghies; Robert Haines, of Coronado, California, who won a gold medal in sailing at the 1984 Olympics; and Henry and Diane Schweitzer, who helped bring windsurfing to the masses.

Recognition of Bill Mattison’s contributions to the 1992 and 1995 America’s Cup sailing competitions are among the very few sailing items that adorn his home.

Mattison was nominated in 2016 by Don Sanford and Steve Holtzman before finally getting the call this year. He is just the fifth Wisconsinite and third from Madison (Peter Barrett and Peter Harken are the others) to make it to the hall, which is dominated by those from the East and West coasts.

“All three of these guys knew each other and there was a synergy here,” said Sanford, who has known Mattison for over 40 years and has written a book about Lake Mendota’s history that includes its sailing culture. “All of us are given some sort of gift and some people are more gifted than others. Bill is one of these guys who has a gift for building things, understanding how materials work and on top of that has an incredible level of persistence.”

Bill Mattison in the neatly organized workshop in the basement of his Madison home.

Mattison was born in West Virginia, but in 1930, when he was 2 years old, his family moved to Madison. He began building rafts as a boy and gradually began adding sails to putter around on Lake Monona. His first iceboat was cobbled together using a sled, scrap lumber and a bed sheet.

Mattison actually ran away from home in 1941 when he was just 13 to work as a roustabout with the Barnum & Bailey Circus, but it was short-lived and he returned home, where he created his own neighborhood circus. Before graduating in 1947 from East High School, Mattison had started Star Photo and had a hand in helping to build the Mary B., perhaps the city’s most well-known iceboat. A short time later he worked on the Fritz, which in 1949 won the William Randolph Hearst trophy.

“We didn’t have any money back in those days to buy much, but we got enough derelict stuff to do it,” Mattison said of his early projects. “I sewed a lot of sails in the basement of our house.”

Bill Mattison, 92, spent countless hours on Lake Mendota, often launching from his dock on Madison’s Near East Side.

Mattison began building better iceboats after high school but in 1950 was drafted into the U.S. Army where he served in a reconnaissance unit that often went behind enemy lines during the Korean War.

When he returned from Korea, Mattison built the first of what would become 14 iceboats named the Honeybucket, a Class A skeeter considered one of the fastest in the world. A few years later he helped his friend, Peter Barrett, of Madison, design a soft water mast based on an iceboat mast for the Olympics. Barrett took 11th in 1960 but in 1964 took home a silver medal.

A Russian magazine from 1960 featured Bill Mattison in one of his iceboats.

Mattison’s accomplishments on the ice were legendary with his designs and builds that won scores of races, but he also excelled in open-water sailing. His name is on more trophies and in more classes than any other member of the Mendota Yacht Club, Sanford said. In 1981, Mattison also restored a 38-foot A-Scow sailboat.

“Through his innovations and innate sense of engineering, Bill Mattison models the values of hard work and community building that are so much a part of the social fabric of sailing,” Sanford and Holtzman wrote in their nomination. “His willingness to share his time, ideas, skills, equipment and materials has truly helped create a community of sailors that spans far beyond the shores of Madison’s four lakes.”

A tented circus display created by Bill Mattison continues to evolve in the basement workshop of his Madison home. For years he had a boat shop on Williamson Street where he built world-class sailboats and iceboats.

Mattison, whose memory has faded, sold Star Photo in 1983 and went to work for a photo finishing company where he traveled the country repairing equipment but maintaining his sailing obsession. He retired in 1998 and for the past 50 years has lived in his home, built in 1913 a few blocks from Tenney Park, with Mauretta. This is where they raised two children and now have two grandchildren. The home is not filled with trophies, but the Hall of Fame induction is special.

“It’s a great honor,” Mauretta said. “Sailing was his life. It was all we knew.”

Barry Adams covers regional news for the Wisconsin State Journal. Send him ideas for On Wisconsin at 608-252-6148 or by email at badams@madison.com.