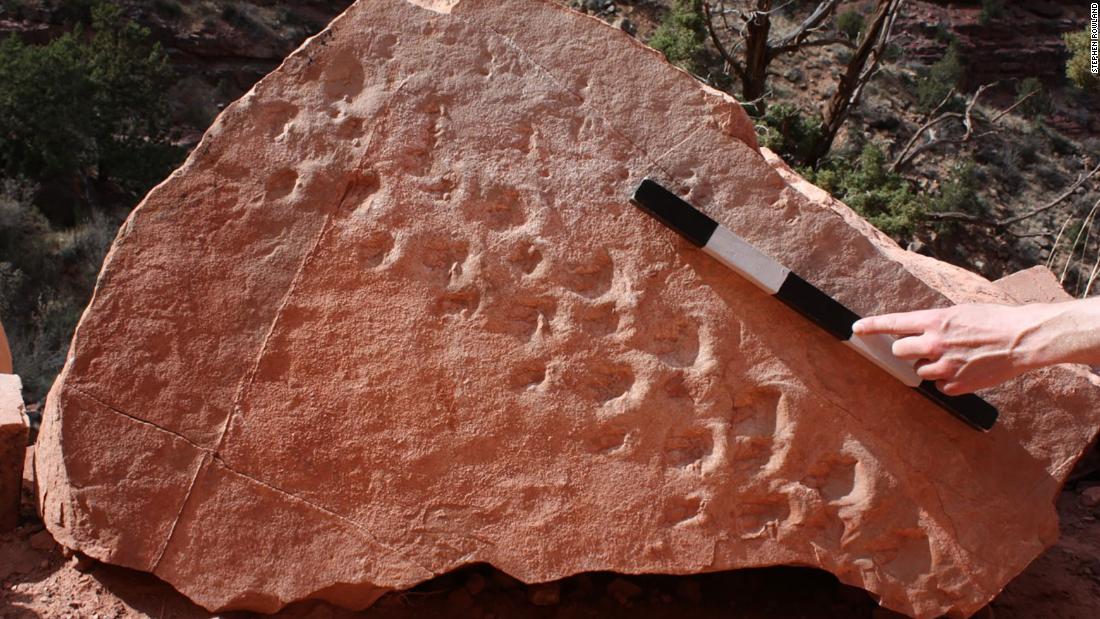 (CNN) — Finding fossil footprints at the Grand Canyon isn’t particularly unusual. The expansive stretch of red rock is home to an array of formations containing preserved remains of the past.

But a discovery made by a geology professor turned out to be a bigger deal than he could have imagined: what he stumbled upon were the oldest vertebrate fossil tracks ever found at Grand Canyon National Park — about 313 million years old.

Geologist Allan Krill, a visiting professor from Norway at the University of Nevada, Las Vegas (UNLV), came across a boulder marked with set of fossil footprints while on a hike with students in 2016, according to a news release this week from the park.
Intrigued by his finding, Krill sent a photo of the tracks to colleague Stephen Rowland, a paleontologist at UNLV. Rowland and a team of colleagues documented the discovery in a paper published Wednesday in the journal PLOS One.

“These are by far the oldest vertebrate tracks in Grand Canyon, which is known for its abundant fossil tracks,” Rowland said in a statement. “… They are among the oldest tracks on Earth of shelled-egg-laying animals, such as reptiles, and the earliest evidence of vertebrate animals walking in sand dunes.”

The boulder containing the fossil tracks was exposed after a cliff collapsed. It had been in plain sight alongside a trail, but had seemingly gone unnoticed until Krill brought it to the attention of geologists.

Researchers said the footprints show two separate animals passing on the slope of a sand dune.

The pattern of the footprints revealed a distinctive gait that scientists did not know about in early animals. Called a lateral-sequence walk, it involves the rear leg and the front leg on one side of the animal moving together, alternating with those legs on the other side moving together.

“Living species of tetrapods, dogs and cats, for example, routinely use a lateral-sequence gait when they walk slowly,” Rowland said in a statement. “The Bright Angel Trail tracks document the use of this gait very early in the history of vertebrate animals. We previously had no information about that.”