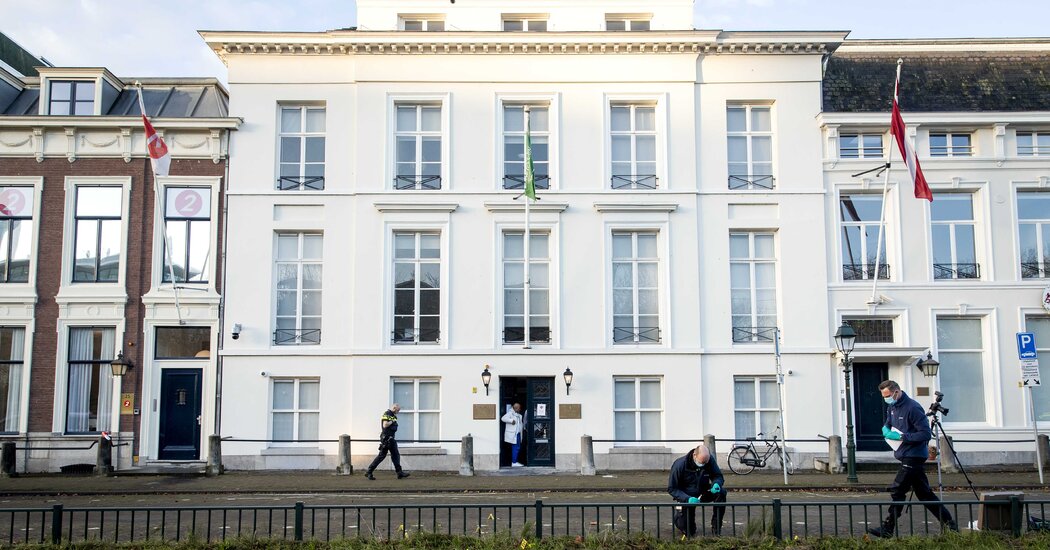 AMSTERDAM — At least one gunman opened fire outside the Saudi Embassy in The Hague, local police officials said Thursday, a day after a World War I commemoration attended by European officials was attacked in Saudi Arabia.

No one was injured in what was a rare attack on embassies or other diplomatic missions in the Netherlands, and it was not immediately clear whether the shooting was related to the violence in Saudi Arabia a day earlier.

The police in The Hague said in a tweet that the shooting at the Saudi Embassy happened around 6 a.m. Thursday, and they urged witnesses to come forward. Local news outlets reported that about 20 shots were fired at the building.

The Saudi embassy in the Netherlands denounced the attack as “cowardly,” according to the Saudi Press Agency, the kingdom’s official news agency.

The Dutch prime minister, Mark Rutte, has voiced strong support for France in the aftermath of the beheading of a teacher by an Islamist extremist in Paris last month. The teacher had shown cartoons about the Prophet Muhammad in a class on freedom of expression.

The renewed debate over publishing caricatures of the prophet has been followed by a series of attacks in France and other countries. In September, an assailant wounded two people near the former office Charlie Hebdo, the French satirical magazine, just weeks after it republished cartoons that prompted a deadly attack in 2015.

Last month, an assailant killed three people at a church in Nice, France. Hours later, a Saudi citizen wounded a guard in a knife attack at the French Consulate in Jeddah, Saudi Arabia.

Then on Wednesday, an explosion at a non-Muslim cemetery in Jeddah, wounded at least three people attending a ceremony organized by the French Consulate to commemorate the end of World War I.

The Islamic State claimed responsibility for the attack on Thursday, according to the SITE Intelligence Group, which monitors Islamic State announcements. The terrorist group said that “Islamic State fighters” had targeted the French consul, who was attending the event, in retaliation for comments by President Emmanuel Macron of France and his government defending the publication of the Muhammad cartoons on free expression grounds.

The hardening of France’s defense of the caricatures has set it apart from the United States and other Western democracies, and has also stoked anger in Muslim countries, where thousands of people have protested the French response to the teacher’s beheading. Some leaders, including President Recep Tayyip Erdogan of Turkey, have also called for a boycott of French products.

In the Netherlands, a high school teacher received threats last week over a cartoon in his classroom supporting Charlie Hebdo, the French magazine that first published the cartoons about Islam. Dutch news outlets reported that the teacher went into hiding, and two education ministers expressed their dismay in a letter to Parliament.

The Saudi embassy is in the center of The Hague, on a busy street with a tram line. The Hague’s mayor, Jan van Zanen, told a local broadcaster that the attack was “unacceptable” and didn’t “belong in our international city of peace and justice.”