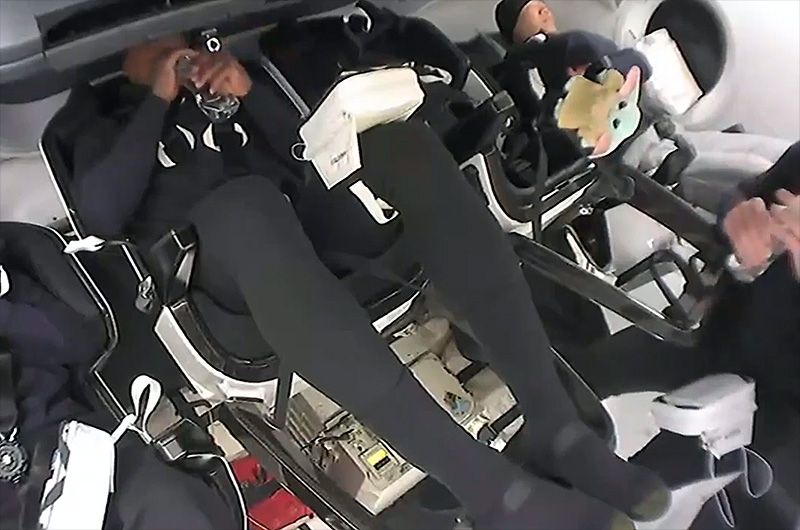 Zero-g Baby Yoda put a smile on our faces, and that was the plan all along.

A few minutes after SpaceX’s Crew Dragon capsule “Resilience” launched on Sunday (Nov. 15), the four astronauts on board liberated a passenger that had been riding in secret — a small plush version of Baby Yoda, or “The Child,” from the Disney+ Star Wars series “The Mandalorian.”

Baby Yoda emerged to mark a milestone, showing the world that the astronauts of the Crew-1 mission — SpaceX’s first operational flight to the International Space Station for NASA — had begun experiencing microgravity on their 27-hour trip to the orbiting lab.

Such zero-g indicators are a time-honored tradition for crewed space missions (and some uncrewed ones, too). For example, SpaceX’s first-ever astronaut mission, the Demo-2 test flight to the station this past summer, used a plush dinosaur named Tremor. That choice was made by the sons of the two astronauts aboard, NASA’s Bob Behnken and Doug Hurley.

The Crew-1 astronauts didn’t delegate their zero-g decision. And they selected Baby Yoda for much the same reason they christened their capsule Resilience, said mission commander and NASA astronaut Mike Hopkins.

“It’s been a tough year. And the fact that … SpaceX and NASA were able to get our spacecraft ready to go, the rocket ready to go, throughout this year, throughout the pandemic, and all of that — we were inspired by everybody’s effort to do that,” Hopkins said during a news conference from the space station on Thursday (Nov. 19).

“And so that’s why we named Resilience, and we hope that it puts a smile on people’s faces, it brings hope to them,” Hopkins said. “Baby Yoda does the same thing. I think everybody, when you see him, it’s hard not to smile, and so it just seemed appropriate. It seemed appropriate for our crew as well. We like to have a lot of fun, and we have been having a lot of fun.”

Crew Dragon’s ascent into space “was probably a little rougher than Baby Yoda was used to, compared to what he rides normally,” Hopkins added with a laugh.

Hopkins was joined during the news conference by fellow Crew-1 astronauts Victor Glover and Shannon Walker of NASA and Japan’s Soichi Noguchi, as well as NASA’s Kate Rubins, who has been living aboard the space station since late October. (The orbiting lab’s other two occupants, cosmonauts Sergey Ryzhikov and Sergey Kud-Sverchkov, did not participate.)

SpaceX holds a $2.6 billion contract with NASA’s Commercial Crew Program to fly at least six operational missions to and from the station using Crew Dragon and the company’s Falcon 9 rocket. The six-month-long Crew-1 is the first of those contracted flights. (The Demo-2 test mission lasted just two months.)

Boeing holds a similar deal, worth $4.2 billion, which it will fulfill with a capsule called CST-100 Starliner. Starliner has one spaceflight under its belt to date — an uncrewed test mission to the orbiting lab that launched in December 2019. But the capsule failed to meet up with the station as planned and must refly the mission successfully before astronauts come aboard. The second attempt is scheduled to lift off in January 2021.