In the battle against Covid-19, Europe is looking back at a summer of squandered opportunities.

With the virus suppressed following months of intensive social restrictions last spring, European leaders quickly moved to accelerate the reopening of society to try to spur an economic recovery. But pockets of infection persisted, and few countries had put in place adequate systems to track and lock down local outbreaks. Making matters worse, in several regions infection rates never fell to a level where such systems could work effectively.

The result: A second wave of infections washing across the continent that is proving difficult to manage and poses the risk that Europe will have to live with high infection rates well into next year.

“People assumed the situation was under control but it wasn’t,” said Rafael Bengoa, the co-director of the Institute for Health and Strategy in Bilbao, Spain. “The fire was out but the embers weren’t.”

European nations are trying to strike a middle path, neither fully repressing the virus nor fully opening up their economies, a vast experiment in how to manage a pandemic without infringing too extensively on civil liberties or destroying livelihoods.

Most are now experimenting with localized restrictions in virus hot spots. But the balancing act is set to be sorely tested as public compliance with rules frays and the death toll again climbs. Already some leaders are abandoning the lighter-touch strategy. Ireland’s government recently announced a six-week lockdown.

“It is just very difficult,” said Lawrence Freedman, a professor at King’s College London. “People talk as if there is an obvious policy to follow but there isn’t.”

The race to return to a form of normality fanned the virus. Across the continent universities welcomed back students, the U.K. government subsidized millions of restaurant meals to get people to eat out, newly reopened borders saw tourists flock to night clubs in Spain and beaches in France. With the virus out of sight, people’s behavior relaxed.

“Authorities prioritized the economy over health, thinking that during the summer nothing would happen,” said Saúl Ares, researcher at the National Center for Biotechnology of Spain’s National Research Council.

Today that has left leaders with little option but to reimpose restrictions to slow the virus’s spread. A state of emergency has been declared in France and Spain. Paris is under nightly curfew and Madrid is locked down. People living in Wales are advised to leave the house only for exercise. Face masks have been made compulsory in Italy, even outdoors. Though these restrictions aren’t yet as stringent as the total closures seen earlier this year, they are likely to both dent economic growth and test the morale of populations in the winter months, experts say.

On the whole, European countries are in a better place to handle the pandemic than in March. Testing capacity has vastly expanded and hospitals are better able to treat the sick. Europeans are now accustomed to social distancing and wearing masks in public.

But even Italy, traumatized after the north of the country was ravaged early on by the virus and which moved more cautiously to reopen than its neighbors, has begun to see a sharp rise in cases.

Germany’s infection rates have also begun to climb. That is despite a robust testing system, built on a world-renowned diagnostics industry, that helped stem the spread of the virus over the summer.

In some ways, European governments had no choice but to reopen and hope that a vaccine or some other cure was available by the fall, said Erik Jones, professor of European studies and international political economy at Johns Hopkins University. In the European Union, the economy had shrunk 11.8% in the second quarter of the year due to Covid-19. “You didn’t get invited to a lot of dinner parties if you predicted a three-year pandemic,” he said.

The 27 countries of the EU and the U.K. reported 280 new cases of coronavirus per million on average for the seven days through Friday, according to data from the European Center for Disease Prevention and Control. That compares with fewer than 10 in early May, when Europeans were emerging from lockdown.

As lockdown restrictions eased and international borders reopened, people’s movement increased and contributed to the resurgence of Covid-19 cases and deaths.

Change in visits to public places 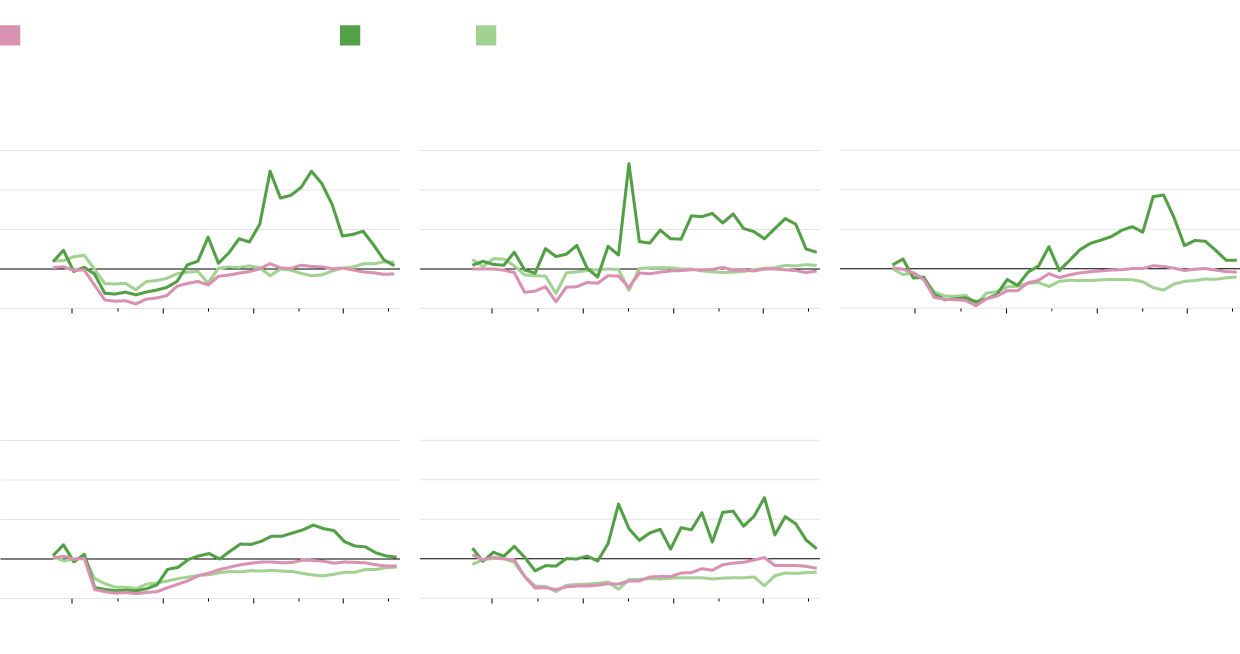 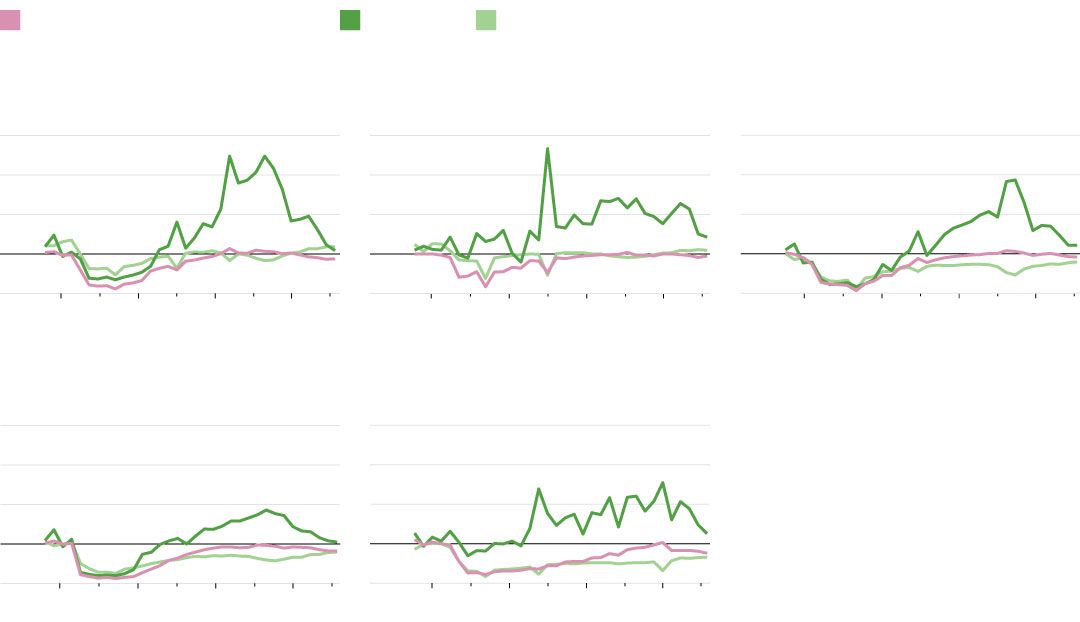 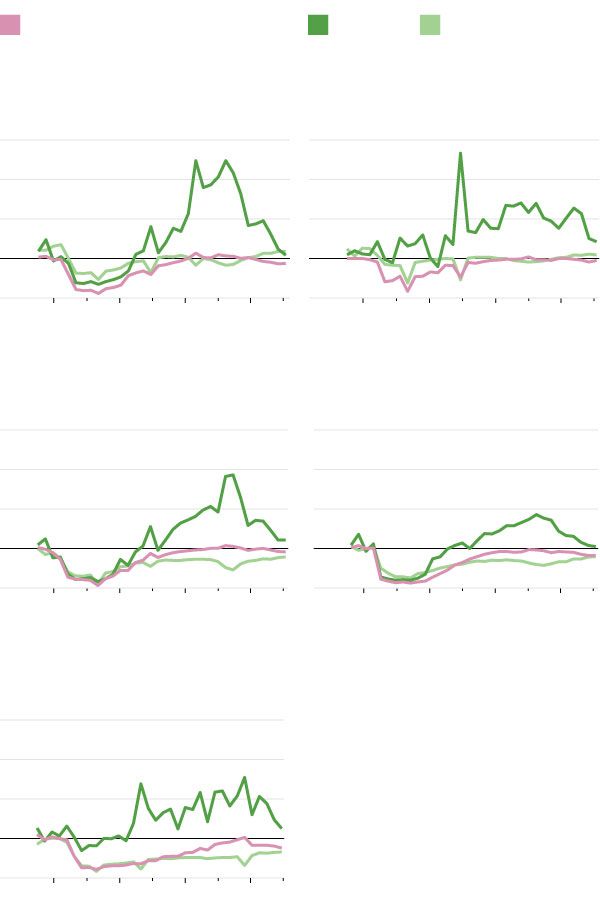 Part of the explanation for the jump in case numbers is widespread testing. But hospitalizations and deaths are also on the rise, a sign the pandemic is worsening. France reported an average of more than 170 Covid-19 deaths a day over the seven days through Friday, while Spain and the U.K. reported more than 160. That is far fewer than the close to 1,000 deaths a day recorded in each of those countries during the pandemic’s spring peak, but sharply up on the trickle of fatalities observed during the summer.

The coronavirus needs social contact to jump from host to host. As economies reopened, summer tourism resumed and Europeans emerged from weeks of lockdown to visit bars and restaurants—and eventually to return to school and university—the spidery chains of transmission lengthened and proliferated. The virus’s ability to spread got an extra boost as summer turned to fall and Europeans spent more time indoors in close proximity to others.

Some countries actively encouraged people back to a semblance of normal life. In August, the British government subsidized over 64 million restaurant meals to prop up the country’s struggling service sector. British Prime Minister Boris Johnson urged Britons to return to work to boost footfall in town centers. 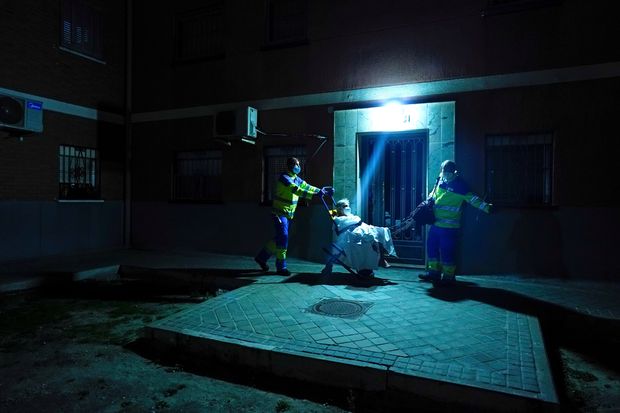 Madrid emergency service technicians push a patient in a wheelchair to the 12 de Octubre Hospital on Monday.

Although governments expanded testing capacity, critical problems remained, including slow turnaround time due to a lack of laboratory capacity, which meant countries struggled to perform enough tests to match the scale of the outbreak. In France, Spain, Britain and elsewhere, test-and-trace systems haven’t coped.

Government support for those in quarantine is patchy across Europe, which disease experts say may dent compliance with quarantine directives.

“I’m sure some people were not saying they were sick because they would have to stop working,” said Yazdan Yazdanpanah, an infectious-disease expert at Bichat Hospital in Paris and a member of the scientific panel advising the French government on Covid-19.

As European countries cope with a second wave of infections, data indicate that tourism has helped the coronavirus spread in popular destinations and travelers’ home countries. WSJ explains how summer travel has made it harder to control the pandemic. Photo: Damir Sencar/Agence France Press

One major difference during the virus’s second wave: Public support for governments’ handling of the pandemic is in many countries fraying, raising questions about how sustainable the latest round of restrictions will be.

“If you’ve got large sections of society who are just unconvinced by what they’re being asked to do, there is a point at which people stop going along with it, or the level of resentment builds until the policies become unsustainable,” said Robert Dingwall, emeritus professor of sociology at Nottingham Trent University.

Do you think a nightly curfew or a travel ban is more effective at curbing the spread of Covid-19? Join the conversation below.

Faced with this, governments are nervous about imposing full-scale lockdowns, favoring instead an array of smaller measures they hope will stem the spread. Britain introduced a three-tier system of restrictions, putting swaths of northern England where the virus is spreading fast under the most onerous rules and leaving other areas relatively free. In the Italian city of Naples, local authorities ordered schools to close for two weeks starting Friday.

Disease experts acknowledge nationwide lockdowns are blunt, if effective, tools and that targeted measures might work if their purpose is clearly communicated to the public and they are implemented effectively.

“Living with this virus is going to be a process of trial and error,” said Graham Medley, professor of infectious-disease modeling at the London School of Hygiene and Tropical Medicine.

—Matthew Dalton in Paris and Giovanni Legorano in Rome contributed to this article.

Write to Max Colchester at max.colchester@wsj.com and Jason Douglas at jason.douglas@wsj.com