How to think about climate change and an orange sky. – Slate 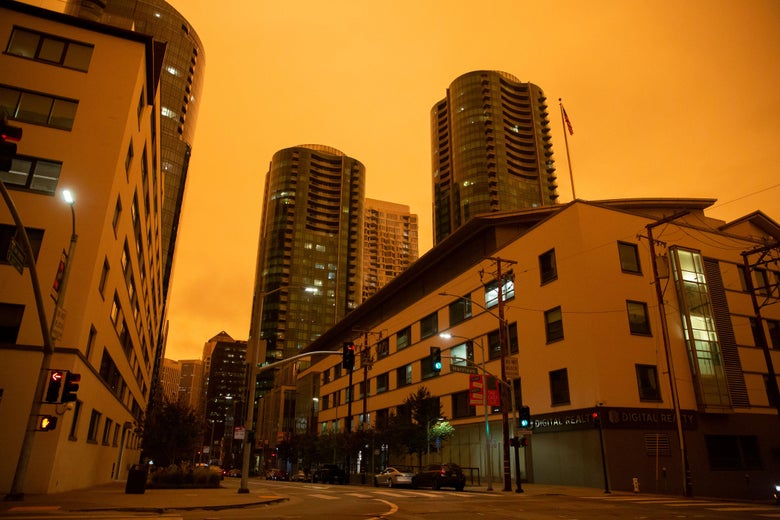 The Infinity Towers are seen under an orange smoke-filled sky in San Francisco on Wednesday. Brittany Hosea-Small/Getty Images

The sky being orange turns out not to be a fact you can set aside. We Americans are good at compartmentalizing—so good that we have not mourned the 190,000 dead in any remotely collective way, so good that we are strenuously pretending that things are not weird and unsustainable right now, even as they are extremely weird and obviously unsustainable. But there was no bracketing off the queasy ochre light that bathed the Bay on Wednesday. An orange sky, it turns out, pokes its way into everything. You’re reading about Bob Woodward’s book and the sky is orange. You get a Coke and the sky is orange. Trump praises Kim Jong-un and the sky is orange. You walk outside and the sky is orange, but at least you confirm what everyone says: However apocalyptic the visuals, the air is in fact better than it has been during these weeks you’ve spent dealing with just the heat and smoke and ash.

The sky is orange and a part of your body that you did not know you had feels and screams about its sunlessness.

The sky is orange because the smoke is suspended in a layer above you. It’s staying up there, filtering out the blue light, so only the ash rains down. “Only the ash!” you say to your partner. You each report encouraging facts to each other; this is a fun new feature of “fire season.” It should be good news that the air isn’t as bad as it looks. It is good news. We’re tired of enduring the heat without being able to open the windows because of all the smoke, so if the air is cool and cleanish, who cares if the sky is orange? Right? “Gonna go wander the streets naked, ringing a bell, crying for the people to come to their senses and remember God,” your partner says. “Be back in an hour.”

I don’t know how parents—used to the challenges of explaining why the sky is blue to inquisitive children—explain that the sky is orange now. And it isn’t just orange—it’s dark. The sky is somehow orange and also sunless. What I mean by this is that there is some animal Vitamin D–generating part of you that feels the sun when you go out. But on Wednesday, solar-powered devices show that almost no solar power is making it through the orange sky. They are scientifically measuring something your skin and eyes feel too when the sky is (for example) blue. The sky is orange and a part of your body that you did not know you had feels and screams about its sunlessness. But the sun is orange, you think stupidly. Determined to function, you try on an epiphany: I finally understand Milton’s line about Hell as a “darkness visible”!, you think, looking at the streetlights shining at 10:49 a.m. But you don’t, really. You don’t understand that line because, for one thing, you have been reliably informed by experts that this is not in fact hell. The air quality is “moderate.” And you don’t understand the thing about the smoke layer, and you don’t understand the thing that people who “know” about things keep saying, which is that the sky being orange is compatible with things being OK. You don’t understand anything, in fact: your inner animal is baffled and more willing to chew its own leg off than to hear things sensibly explained.

But a different smug part of you realizes something: You’re more freaked out by the orange sky than you are by the smoke. Living with fires has taught you to deal with the smoke. The smoke was horrifying at first, sure. Smoky air feels heavy and malnourishes you: when you breathe in, it doesn’t quite feel like you’ve breathed in. This is OK in the short term, but you can sense how quickly its effects could accumulate. You acquire protective feelings about things that just shouldn’t be covered in ash: tomatoes and shoes at first, things close at hand. Animals and people, when you realize what poisoning the air really means. Smoke floats in through the fireplace and under the doors. Still, the smoke lacks the horror of the uncanny: It’s empirically verifiable, and if you’re lucky enough to have a home, you can at least employ some technologies: Close doors and windows. Run air filters. Get N95 masks.

When I was growing up near the Sacramento River, no one talked about a “fire season.” The emergencies I grew up with were earthquakes, droughts, and floods. People coped with the drought with what struck me as startlingly intimate receptacle management: milk cartons and bricks in toilets. They changed their shower nozzles to make them worse. But the lawns stayed green in the 110-degree summers, and the swimming pools stayed full. The mismatch proved things about people that we all know very well now.

When the sky is orange, nothing you expect to find there is there. No proximate cause—no smoke to account for it, no yellow poison gas. And again (you repeat things)—almost like an eclipse—no sun. “I think there’s a kind of disconnect occurring between what one sense is processing and what the others expect in turn. The fact that our eyes are telling us to run but that our nose and mouths are like ‘this is fine,’ that is deeply alarming,” my friend Rahawa Haile says when I text her to say that maybe I do have instinct after all. “Every sci-fi show has told us that this is what another planet would be like. So it’s not just the fear of what’s actually happening (fires) but the inability to process what isn’t happening (we are on another planet).” This is right, and it is humiliating. We find we both agree on the facts and yet are unable to reason our way out of how it feels when the sky is orange.

I tried to use a human technology to manage it: I pulled down all the shades so I could pretend it was night. It didn’t work. Someday soon, I suppose we will learn how to manage orange skies too. Maybe I will accept them as a new feature of this planet.

The tragic thing about climate change is that it isn’t comprehensible. It will reduce us to our animal selves before our rational bits start to take things seriously. David Wallace-Wells tweeted Thursday that “the previous worst year in California state fire history was 2018, when 1.89 million acres burned. This year is currently at 3.2 million, with three of the worst four (and five of the worst ten) in state history still burning. The fire season runs through December.”* I try this on and recognize it is informative, but I’m close enough to animal alarm to recognize something else, too: These numbers stir nothing in me. Those are too many millions. I can regret two different sets of millions, but I can’t feel them. They are abstract numbers, and the sky is orange.

“Why is the sky now grey instead of orange?” the Bay Area Air Quality account tweeted on Thursday. It started to explain something about water vapor at higher altitudes, but I tuned out, shaken by the new normalcy of the question.

Correction, Sept. 11, 2020: This piece originally misstated when David Wallace-Wells tweeted about the previous worst year in California fire history. He tweeted about this on Thursday, not Friday.